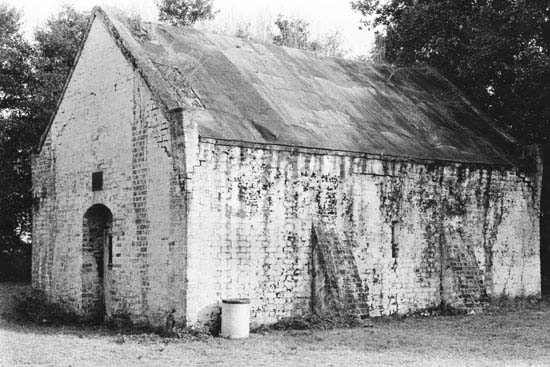 Photographer: S.C. Dept of Archives and History
Taken: 1972
Caption: Powder Magazine
Additional Description: National Register of Historic Places: Fort Johnson/Powder Magazine *** (added 1972 - Site - #72001197) Fort Johnson is significant both militarily and politically, especially as the site of the first raising of the South Carolina flag in 1775 and as the site of the first shots fired upon Fort Sumter in 1861. Of the fort itself, only considerably eroded Confederate earthworks remain, although other elements of the fort’s foundations are discernable from ground swells and rubble. Fort Johnson was one of the first defensive works constructed to protect the harbor or Charleston against naval attack. The initial fortification was constructed by the British during the years 1704-08 for defense against the French fleet during Queen Anne’s War. The fort was named for Sir Nathaniel Johnson, Proprietary Governor of the Carolinas from 1703 to 1709. There was continual reconstruction of the fort from 1704 to 1865, due primarily to damage incurred by storms and to ever-changing military situations. Although the fort itself is in ruins, the powder magazine, erected in 1765, is intact.
Submitted: April 21, 2010, by Mike Stroud of Bluffton, South Carolina.
Database Locator Identification Number: p105612
File Size: 0.317 Megabytes