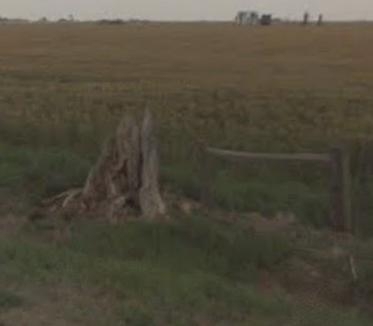 Caption: Remains of the "Marrying Tree"
Additional Description: The "Marrying Tree" was destroyed in a wind storm in 2007; only the stump remains along a fenceline along the north boundary line of the Land Run of 1889.

It has also been speculated that between 1867 and 1877, the "Marrying Tree" was witness to millions of head of longhorns headed north on the Chisholm Trail, which is just off to the west of Hwy 81.
Submitted: January 18, 2011.
Database Locator Identification Number: p142781
File Size: 0.017 Megabytes