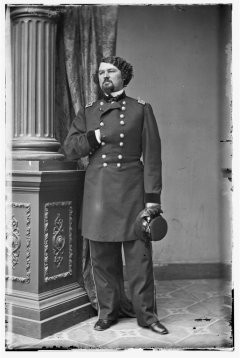 Photographer: Library of Congress
Caption: Samuel D. Sturgis (1822-1889)
Additional Description: In March of 1862, he was promoted to brigadier general for his actions during the battle. After his promotion, Sturgis served within the defenses of Washington DC, and was ordered to support the army commanded by general John Pope shortly before the Second Battle of Manassas. Sturgis was then placed in charge of a division of the XI Corps, and led the division through the battles of South Mountain, Antietam, and Fredericksburg.
Submitted: September 30, 2015, by Brian Scott of Anderson, South Carolina.
Database Locator Identification Number: p331660
File Size: 0.019 Megabytes