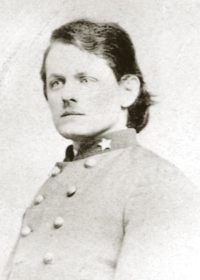 Photographer: Brian Scott
Caption: Col. Henry Kyd Douglas (d. 1903)
Additional Description: Immediately after the war he was held as a witness at the trial of the Lincoln conspirators, having known some of them. He practiced law at Hagerstown, corresponded and wrote for the press about the Civil War, and was active in veterans' affairs. He wrote his memoirs, I Rode With Stonewall (first published 1940). He led an initiative for the re-burial of Confederates from the Antietam Battlefield to Hagerstown in 1877. He later ran for office in the Maryland Senate and U.S. Congress, but was unsuccessful.
Submitted: October 27, 2015, by Brian Scott of Anderson, South Carolina.
Database Locator Identification Number: p335643
File Size: 0.034 Megabytes