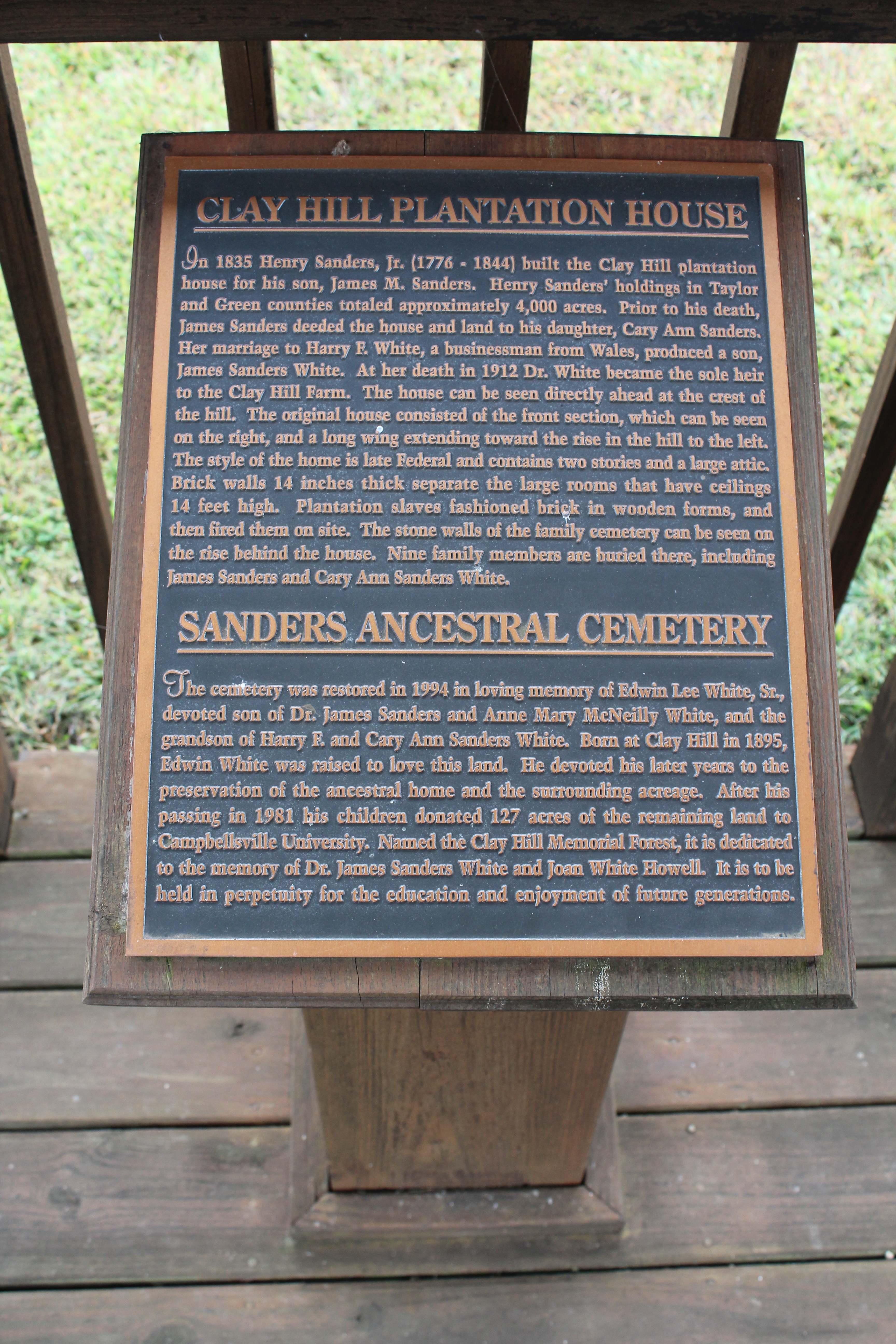 Photographer: Tom Bosse
Taken: October 13, 2016
Caption: Clay Hill Plantation House Marker
Additional Description: Clay Hill Plantation House
In 1835 Henry Sanders, Jr. (1776-1844) built the Clay Hill plantation house for his son, James M. Sanders. Henry Sanders' holdings in Taylor and Green counties totaled approximately 4,000 acres. Prior to his death, James Sanders deeded the house and land to his daughter, Cary Ann Sanders. Her marriage to Harry F. White, a businessman from Wales, produced a son, James Sanders White. At her death in 1912 Dr. White became the sole heir to the Clay Hill Farm. The house can be seen directly ahead at the crest of the hill. The original house consisted of the front section, which can be seen on the right, and a long wing extending toward the rise in the hill to the left. The style of the home is late Federal and contains two stories and a large attic. Brick walls 14 inches thick separate the large rooms that have ceilings 14 feet high. Plantation slaves fashioned brick in wooden forms, and them fired them on site. The stone walls of the family cemetery can be seen on the rise behind the house. Nine family members are buried there, including James Sanders and Cary Ann Sanders White.
Sanders Ancestral Cemetery
The cemetery was restored in 1994 in loving memory of Edwin lee White, Rs., devoted son of Dr. James Sanders and Anne Mary McNeilly White, and the grandson of Harry F. and Cary Ann Sanders White. Born at Clay Hill in 1895, Edwin White was raised to love this land. He devoted his later years to the preservation of the ancestral home and the surrounding acreage. After his passing in 1981 his children donated 127 acres of the remaining land to Campbellsville University. Named the Clay Hill Memorial Forest, it is dedicated to the memory of Dr. James Sanders White and Joan White Howell. It is to be held in perpetuity for the education and enjoyment of future generations.
Submitted: November 5, 2016, by Tom Bosse of Jefferson City, Tennessee.
Database Locator Identification Number: p368371
File Size: 8.340 Megabytes