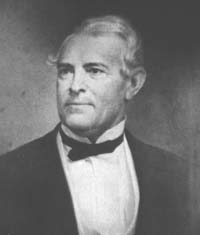 Taken: October 12, 2008
Caption: George A. Trenholm
Additional Description: George Alfred Trenholm (February 25, 1807 – December 9, 1876) was a prominent politician in the Confederate States of America. George Alfred Trenholm was born in Charleston, South Carolina. At the age of sixteen he left school and went to work for a major cotton broker, John Fraser & Co. in Charleston. By 1853 he was head of the company. When the Civil War broke out, John Fraser & Co. became the Confederate government's overseas banker and financed its own fleet of blockade runners. Trenholm was appointed Confederate Secretary of the Treasury on July 18, 1864. He fled Richmond with the rest of the government in April, 1865. Due to illness he resigned on April 27, 1865. He was later briefly imprisoned at Fort Pulaski near Savannah, Georgia.
Submitted: October 12, 2008, by Stanley and Terrie Howard of Greer, South Carolina.
Database Locator Identification Number: p39066
File Size: 0.005 Megabytes