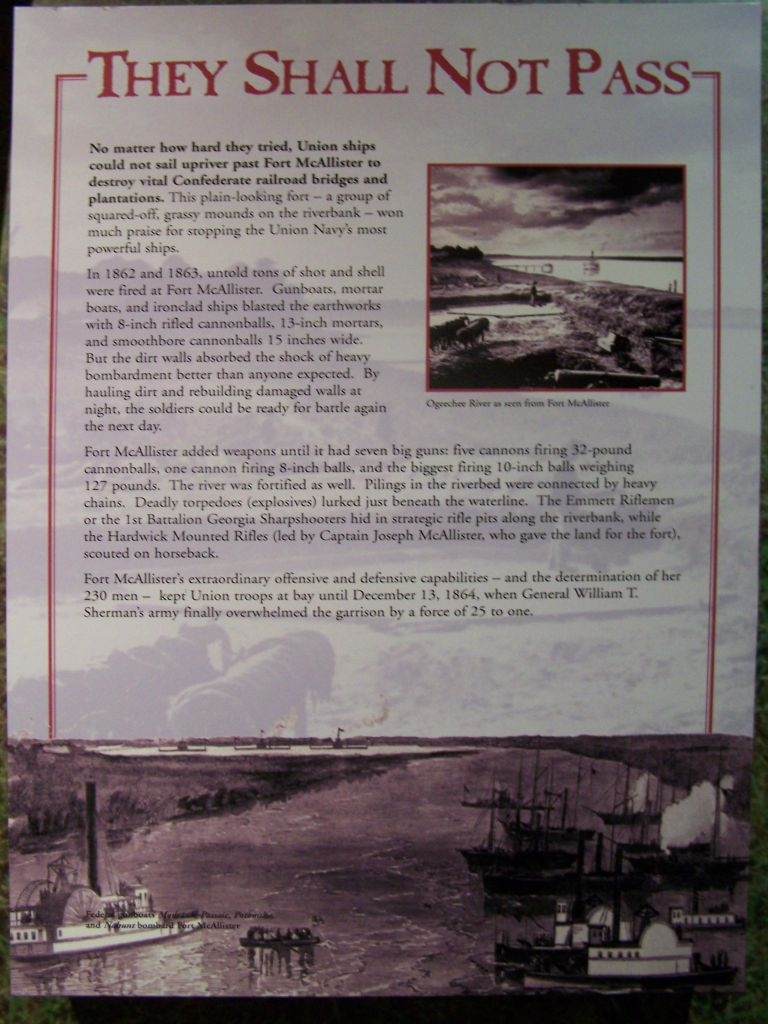 Photographer: Mike Stroud
Taken: 2008
Caption: They Shall Not Pass
Additional Description: No matter how hard they tried, Union ships could not sail upriver past Fort McAllister to destroy vital Confederate railroad bridges and plantations. This plain-looking fort - a group of squared off, grassy mounds on the riverbank - won much praise for stopping the Union Navy's most powerful ships.
In 1862 and 1863, untold tons of shot and shell were fired at Fort McAllister. Gunboats, mortar boats, and ironclad ships blasted the earthworks with 8-inch rifled cannonballs, 13 inch mortars, and smoothbore cannonballs 15 inches wide. But the dirt walls absorbed the shock of heavy bombardment better than anyone expected. By hauling dirt and rebuilding damaged walls at night, the soldiers could be ready for battle again the next day.
Fort McAllister added weapons until it had seven big guns: five cannons firing 32-pound cannonballs, one cannon firing 8-inch balls, and the biggest firing 10-inch balls weighing 127 pounds. The river was fortified as well. Pilings in the riverbed were connected by heavy chains. Deadly torpedoes (explosives) lurked just beneath the waterline. The Emmitt Rifleman or the 1st Battalion Georgia Sharpshooters hid in strategic rifle pits along the riverbank, while the Hardwick Mounted Rifles (led by Captain Joseph McAllister, who gave this land for the fort), scouted on horseback.
Fort McAllister's extraordinary offensive and defensive capabilities - and the determination of her 230 men - kept Union troops at bay until December 13, 1864, when General William T. Sherman's army finally overwhelmed the garrison by a force of 25 to one.
Submitted: October 23, 2008, by Mike Stroud of Bluffton, South Carolina.
Database Locator Identification Number: p40649
File Size: 0.138 Megabytes