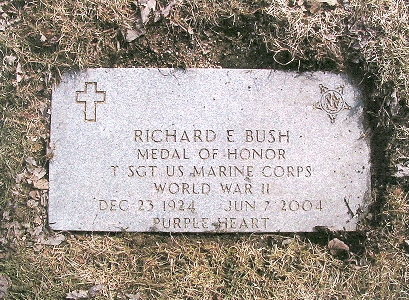 Citation: For conspicuous gallantry and intrepidity at the risk of his life above and beyond the call of duty as a squad leader serving with the 1st Battalion, 4th Marines, 6th Marine Division, in action against enemy Japanese forces, during the final assault against Mount Yaetake on Okinawa, Ryukyu Islands, 16 April 1945. Rallying his men forward with indomitable determination, Cpl. Bush boldly defied the slashing fury of concentrated Japanese artillery fire pouring down from the gun-studded mountain fortress to lead his squad up the face of the rocky precipice, sweep over the ridge, and drive the defending troops from their deeply entrenched position. With his unit, the first to break through to the inner defense of Mount Yaetake, he fought relentlessly in the forefront of the action until seriously wounded and evacuated with others under protecting rocks. Although prostrate under medical treatment when a Japanese hand grenade landed in the midst of the group, Cpl. Bush, alert and courageous in extremity as in battle, unhesitatingly pulled the deadly missile to himself and absorbed the shattering violence of the exploding charge in his body, thereby saving his fellow marines from severe injury or death despite the certain peril to his own life. By his valiant leadership and aggressive tactics in the face of savage opposition, Cpl. Bush contributed materially to the success of the sustained drive toward the conquest of this fiercely defended outpost of the Japanese Empire. His constant concern for the welfare of his men, his resolute spirit of self-sacrifice, and his unwavering devotion to duty throughout the bitter conflict enhance and sustain the highest traditions of the U.S. Naval Service.
Submitted: April 11, 2018, by Don Morfe of Baltimore, Maryland.
Database Locator Identification Number: p422657
File Size: 0.165 Megabytes

To see the metadata that may be embedded in this photo, sign in and then return to this page.