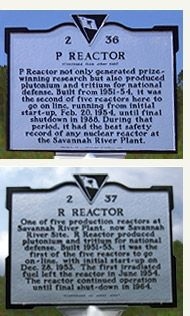 P Reactor
P Reactor not only generated prize- winning reach but also produced plutonium and tritium for national defense. Built from 1951 - 1954, it was the of five reactors here to go on line, running from initial start - up, Feb. 20, 1954, until final shutdown in 1988. During that period, it had the best safety record of any nuclear reactor at Savannah River Plant.