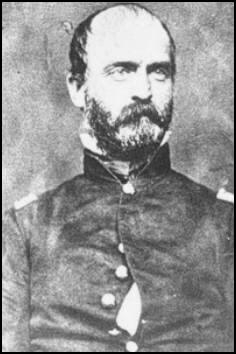 Caption: Brigadier General Lewis Armistead
Additional Description: General Armistead was a career soldier in the U.S. Army before the war. Cited for bravery during the Mexican War, he was brevetted to Major. At the onset of war, he parted company with his long time friend Winfield Scott Hancock to join the Confederacy, saying "May God strike me dead" if I meet you in battle. On July 3, 1863, Armistead lead his brigade against Federal forces commanded by Major General Hancock. Mortally wounded after capturing a Federal battery, Armistead died in a Federal field hospital.