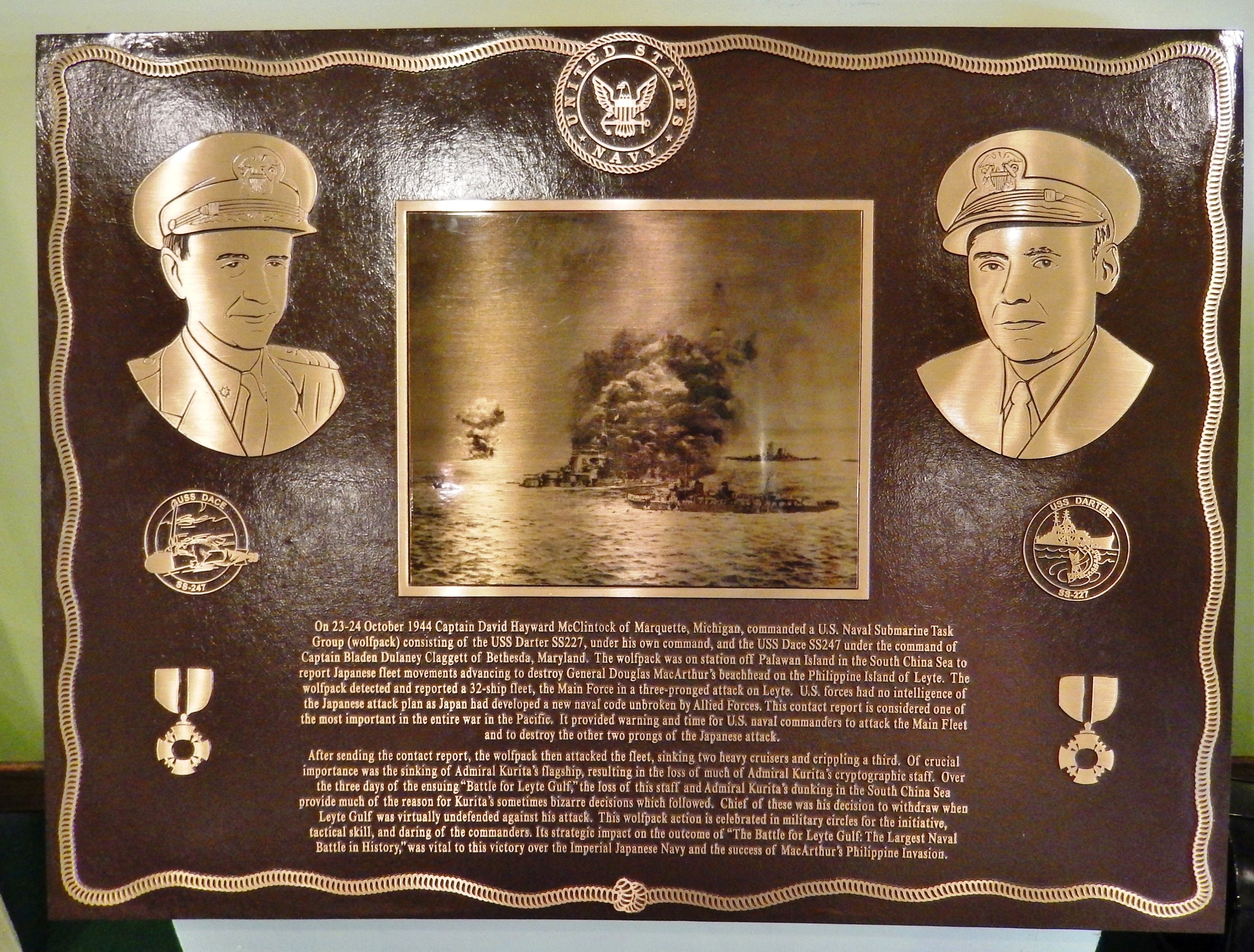 Photographer: Cosmos Mariner
Taken: August 1, 2017
Caption: Battle for Leyte Gulf Memorial Plaque
Additional Description:
(on exhibit inside nearby Marquette Maritime Museum)
On 23-24 October 1944 Captain David Hayward McClintock of Marquette, Michigan, commanded a U.S. Naval Submarine Task Group (wolfpack) consisting of the USS Darter SS227, under his own command, and the USS Dace SS247 under the command of Captain Bladen Dulaney Claggett of Bethesda, Maryland. The wolfpack was on station off Palawan Island in the South China Sea to report Japanese fleet movements advancing to destroy General Douglas MacArthur's beachhead on the Philippine Island of Leyte. The wolfpack detected and reported a 32-ship fleet, the Main Force in a three-pronged attack on Leyte. U.S. forces had no intelligence of the Japanese attack plan as Japan had developed a new naval code unbroken by Allied Forces. This contact report is considered one of the most important in the entire war in the Pacific. It provided warning and time for U.S. naval commanders to attack the Main Fleet and to destroy the other two prongs of the Japanese attack.

After sending the contact report, the wolfpack then attacked the fleet, sinking two heavy cruisers and crippling a third. Of crucial importance was the sinking of Admiral Kurita's flagship, resulting in the loss of much of Admiral Kurita's cryptographic staff. Over the three days of the ensuing "Battle for Leyte Gulf," the loss of this staff and Admiral Kurita's dunking in the South China Sea provide much of the reason for Kurita's sometimes bizarre decisions which followed. Chief of these was his decision to withdraw when Leyte Gulf was virtually undefended against his attack. This wolfpack action is celebrated in military circles for the initiative, tactical skill, and daring of the commanders. Its strategic impact on the outcome of "The Battle for Leyte Gulf: The Largest Naval Battle in History," was vital to this victory over the Imperial Japanese Navy and the success of MacArthur's Philippine Invasion.
Submitted: August 2, 2020, by Cosmos Mariner of Cape Canaveral, Florida.
Database Locator Identification Number: p533490
File Size: 4.756 Megabytes