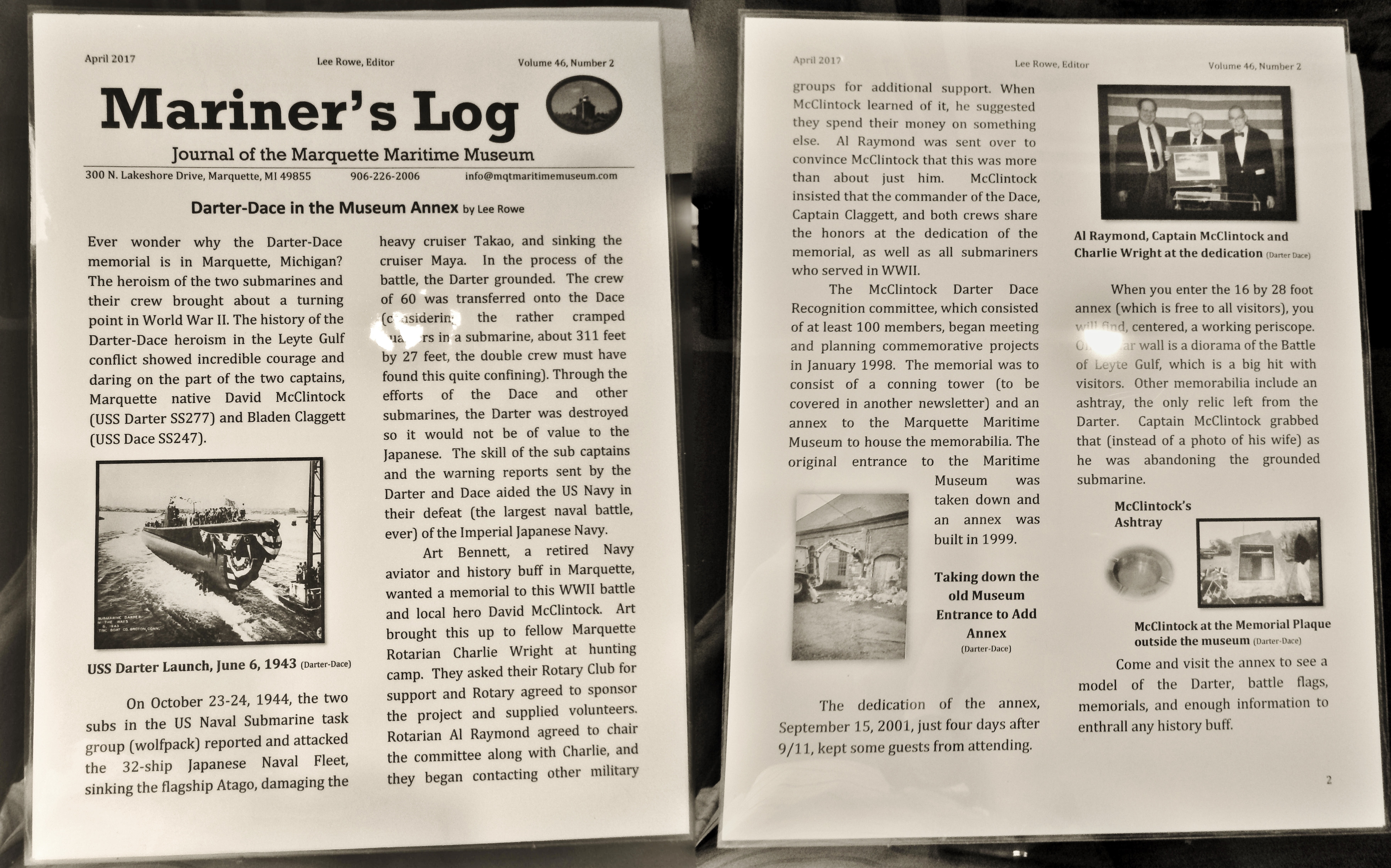 April 2017 • Lee Rowe, Editor • Volume 46, Number 2
Mariner's Log
Journal of the Marquette Maritime Museum
Ever wonder why the Darter-Dace memorial is in Marquette, Michigan? The heroism of the two submarines and their crew brought about a turning point in World War II. The history of the Darter-Dace heroism in the Leyte Gulf conflict showed incredible courage and daring on the part of the two captains, Marquette native David McClintock (USS Darter SS277) and Bladen Claggett (USS Dace SS247).

On October 23-24, 1944, the two subs in the US Naval Submarine task group (wolfpack) reported and attacked the 32-ship Japanese Naval Fleet, sinking the flagship Atago, damaging the heavy cruiser Takao, and sinking the cruiser Maya. In the process of the battle, the Darter grounded. The crew of 60 was transferred onto the Dace (considering the rather cramped quarters in a submarine, about 311 feet by 27 feet, the double crew must have found this quite confining). Through the efforts of the Dace and other submarines, the Darter was destroyed so it would not be of value to the Japanese. The skill of the sub captains and the warning reports sent by the Darter and Dace aided the US Navy in their defeat (the largest naval battle, ever) of the Imperial Japanese Navy.

Art Bennett, a retired Navy aviator and history buff in Marquette, wanted a memorial to this WWII battle and local hero David McClintock. Art brought this up to fellow Marquette Rotarian Charlie Wright at hunting camp. They asked their Rotary Club for support and Rotary agreed to sponsor the project and supplied volunteers. Rotarian Al Raymond agreed to chair the committee along with Charlie, and they began contacting other military groups for additional support. When McClintock learned of it, he suggested they spend their money on something else. Al Raymond was sent over to convince McClintock that this was more than about just him. McClintock insisted that the commander of the Dace, Captain Claggett, and both crews share the honors at the dedication of the memorial, as well as all submariners who served in WWII.

The McClintock Darter Dace Recognition committee, which consisted of at least 100 members, began meeting and planning commemorative projects in January 1998. The memorial was to consist of a conning tower (to be covered in another newsletter) and an annex to the Marquette Maritime Museum to house the memorabilia. The original entrance to the Maritime Museum was taken down and an annex was built in 1999.

The dedication of the annex, September 15, 2001, just four days after 9/11, kept some guests from attending.

When you enter the 16 by 28 foot annex (which is free to all visitors), you will find, centered, a working periscope. On the wall is a diorama of the Battle of Leyte Gulf, which is a big hit with visitors. Other memorabilia include an ashtray, the only relic left from the Darter. Captain McClintock grabbed that (instead of a photo of his wife) as he was abandoning the grounded submarine. Come and visit the annex to see a model of the Darter, battle flags, memorials, and enough information to enthrall any history buff.