Birth of Truth In Advertising 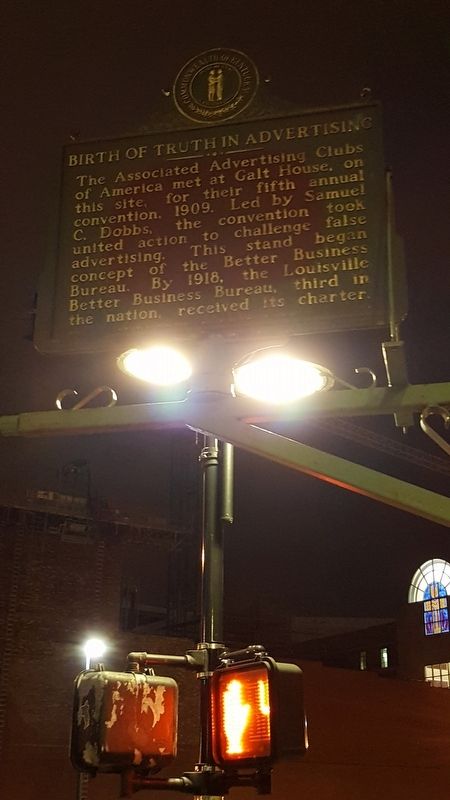 By Pat Filippone, November 24, 2016
1. Birth of Truth In Advertising Marker
Inscription.
Birth of Truth In Advertising. . The Associated Advertising Clubs of America met at Galt House, on this site, for their fifth annual convention, 1909. Led by Samuel C. Dobbs, the convention took united action to challenge false advertising. This stand began concept of the Better Business Bureau. By 1918, the Louisville Better Business Bureau, third in the nation, received its charter. . This historical marker was erected by Kentucky Historical Society Kentucky Department of Transportation. It is in Louisville in Jefferson County Kentucky

Topics and series. This historical marker is listed in this topic list: Industry & Commerce. In addition, it is included in the Kentucky Historical Society series list. A significant historical year for this entry is 1909.

Other nearby markers. At least 8 other markers are within walking distance of this marker. Old Forester Distilling Co. (about 300 feet away, measured in a direct line); First Louisville Slugger Bat (about 300 feet away); Second African Baptist Church

Click or scan to see
this page online
(about 500 feet away); The Galt House (about 500 feet away); Slave Trading In Louisville / Garrison Slave Pen Site (about 500 feet away); The Discovery of the Ohio River (about 600 feet away); Slavery Laws In Old Kentucky/Site of Arterburn Brothers Slave Pens (about 700 feet away); Clarke & Loomis Architects / Levy Brothers Building (approx. 0.2 miles away). Touch for a list and map of all markers in Louisville.
Credits. This page was last revised on July 10, 2020. It was originally submitted on January 9, 2017, by Pat Filippone of Stockton, California. This page has been viewed 431 times since then and 8 times this year. Photo   1. submitted on January 9, 2017, by Pat Filippone of Stockton, California. • Bill Pfingsten was the editor who published this page.

Editor’s want-list for this marker. Take an in-focus close-up photo of marker. Make sure the text is readable and take a wide shot of the marker and its surroundings. • Can you help?
Share This Page.