The 1863 Siege of Knoxville 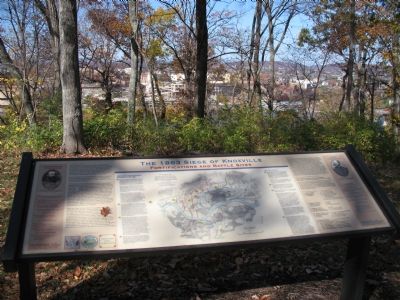 Introduction.
After defeating the Union Army of the Cumberland in the bloody battle of Chickamauga (Sep 18-20, 1863) and besieging the Federal provisions in the city of Chattanooga, Confederate Army of Tennessee Commander Gen. Braxton Bragg turned his attention to driving Gen. Ambrose F. Burnside’s Army of the Ohio out of East Tennessee. Burnside had moved his army from Kentucky into Knoxville on Sept 3, 1863 following the Confederates’ abandonment of the city on Aug. 25-26.

Initial Confederate movements from the south and northeast overwhelmed the Union cavalry outposts at Philadelphia on Oct. 22 and Rogersville on Nov. 5 with a combined Union loss of more than 1,100 men.

On November 5 a powerful command under General James Longstreet began moving north from Chattanooga combining both the power and experience necessary to rid East Tennessee of its Union occupiers. Two veteran infantry divisions (Hood’s & McLaws') from the Army of Northern Virginia, numbering more than 12,000 men, bolstered by 4,500 cavalry under Gen. Joe Wheeler (Army of Tennessee), and the artillery battalions of Col. Edward Porter Alexander 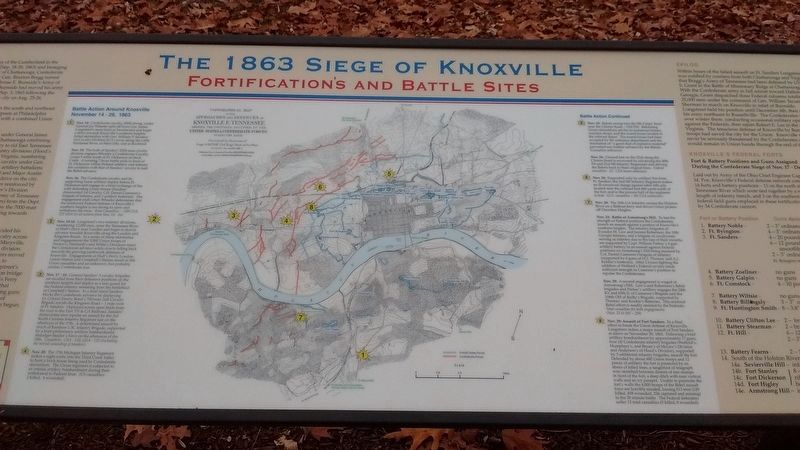 Click or scan to see
this page online
(23 guns) and Major Austin Leyden (12 guns) began a slow, inexorable drive on the city. Three weeks later this force would be further reinforced by two infantry brigades from Simon B. Buckner’s Division (2,625 men under Bushrod Johnson) of the Army of Tennessee and nearly 2,000 additional cavalry (2 brigades) from the Dept. of SW Virginia. About the same time a drive by the 7000-man division of Gen. Robert L. Ransom began moving towards Knoxville from southwestern Virginia.

Eight days later, on November 13, Longstreet divided his command at Sweetwater—sending Wheeler’s cavalry across the Little Tennessee River, through Rockford to engage Gen. William E. Sanders’ Union cavalry at Maryville. Driving Sanders’ cavalry before it, Wheeler’s cavalry was ordered to attack Knoxville’s southern heights. Meanwhile, to complete the envelopment of Burnside’s army, Longstreet’s Rebel infantry and artillery force assembled a pontoon bridge west of Loudon, crossed the Tennessee River at Huff’s Ferry on the right of the 14th, and began a three-day drive that would bring it to the outskirts of Knoxville and the waiting gins of her 15,000 Union defenders. The Confederate siege of Knoxville and the battles to determine its fate were thus begun.

Epilog. Within hours of the failed assault on Ft. Sanders Longstreet was notified by couriers from both Chattanooga and 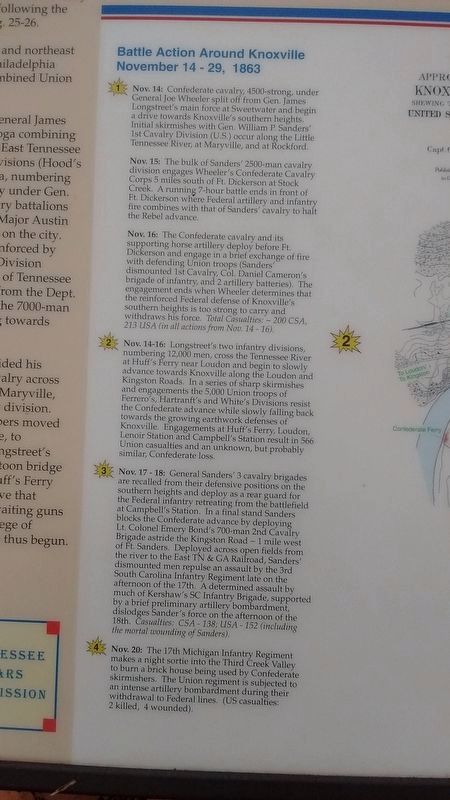 By Tom Bosse, December 16, 2016
3. The 1863 Siege of Knoxville Marker
Battle Action Around Knoxville November 14-29, 1863
Virginia that Bragg’s Army of Tennessee had been defeated by Ulysses S. Grant in the Battle of Missionary Ridge at Chattanooga. With the Confederate army in full retreat between Dalton, Georgia, Grant dispatched three Federal columns totaling 25,000 men under the command of Gen. William Tecumseh Sherman to march on Knoxville in relief of Burnside. Longstreet held his position until December 4th, then moved his army northeast to Russellville. The Confederates would over winter there, conducting occasional military operations against the Federals, then rejoin Robert E. Lee in the spring in Virginia. The tenacious defense of Knoxville by Burnside’s troops had saved the city for the Union. Knoxville would never be seriously threatened by the Confederates again., and would remain in Union hands through the end of the war.

Laid out by Army of the Ohio Chief Engineer Capt. Orlando M. Poe, Knoxville's Federal defense network consisted of 16 forts and battery positions — 13 on the north side of the Tennessee River which were tied together by a … length of infantry trench and 3 on the southern heights. The 55 federal field guns emplaced in these fortifications were opposed by 34 Confederate cannons. 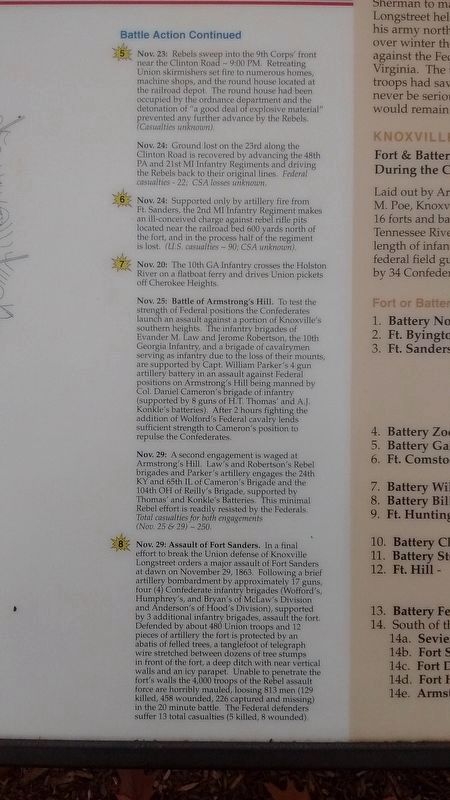 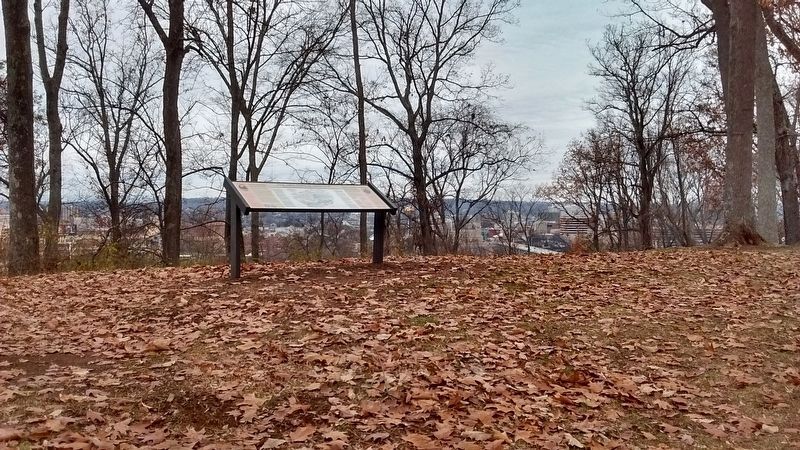 By Tom Bosse, December 16, 2016
5. The 1863 Siege of Knoxville Marker
with Gen. William P. Sanders 1st Cavalry Division (U.S.) occur along the Little Tennessee River, at Maryville, and at Rockford.

Nov 16: The Confederate cavalry and its supporting horse artillery deploy before Ft. Dickerson and engage in a brief exchange of fire with defending Union troops (Sanders’ dismounted 1st Cavalry, Col. Daniel Cameron's brigade of infantry, and 2 artillery batteries). The engagement ends when Wheeler determines that he reinforced Federal defense of Knoxville's southern heights is too strong to carry and withdraws his force. Total Casualties: ~200 CSA, 213 USA (in all actions from Nov. 14-16).

(2) • Nov. 14-16: Longstreet's two infantry divisions numbering 12,000 men, cross the Tennessee River at Huff's Ferry near Loudon and begin to slowly advance towards Knoxville along the Loudon and Kingston Roads. In a series of sharp skirmishes and engagements the 5,000 Union troops of Ferrero's, Hartranft's and White's Divisions resist the Confederate advance while slowly falling back towards the growing earthwork defenses of Knoxville. Engagements at Huff's Ferry, Loudon, Lenoir Station and Campbell's Station result in 566 Union casualties and an unknown, but probably similar, Confederate loss.

(3) • Nov. 17-18: General Sanders' 3 cavalry brigades are recalled from their defensive positions on the southern heights and deploy as a rear guard for the Federal infantry retreating from the battlefield at Campbell's Station. In a final stand Sanders blocks the Confederate advance by deploying Lt. Colonel Emery Bond's 700-man 2nd Cavalry Brigade astride the Kingston Road ~1 mile west of Ft. Sanders. Deployed across open fields from the river to the East TN & GA Railroad, Sanders’ dismounted men repulse an assault by the 3rd South Carolina Infantry Regiment late on the afternoon of the 17th. A determined assault by much of Kershaw's SC Infantry Brigade, supported by a brief preliminary artillery bombardment dislodges Sander's force on the afternoon of the 18th. Casualties: CSA - 138, USA - 152 (including the mortal wounding of Sanders).

(4) • Nov. 20: The 17th Michigan Infantry Regiment makes a night sortie into the Third Creek Valley to burn a brick house being used by Confederate skirmishers. The Union regiment is subjected to an intense artillery bombardment during their withdrawal to Federal lines. (US casualties 2 killed, 4 wounded).

(5) • Nov. 23: Rebels sweep into the 9th Corps’ front near the Clinton Road ~9:00 PM. Retreating Union skirmishers set fire to numerous homes, machine shops, and the round house located at the railroad depot. The round house had been occupied by the ordnance department and the detonation of "a good deal of explosive material” prevented any further advance by the Rebels. (Casualties unknown).

Nov. 24: Ground lost on the 23rd along the Clinton Road is recovered by advancing the 48th PA and 21st MI Infantry Regiments and driving the Rebels back to their original lines. Federal casualties - 22, CSA losses unknown.

(6) • Nov. 24: Supported only by artillery fire from Ft. Sanders, the 2nd MI Infantry Regiment makes an ill-conceived charge against rebel rifle pits located near the railroad bed 600 yards north of the fort, and in the process half of the regiment is lost. (U.S. casualties ~90; CSA unknown).

(7) • Nov. 20: The 10th GA Infantry crosses the Holston River on a flatboat ferry and drives Union pickets off Cherokee Heights.

Nov. 25: Battle of Armstrong's Hill. To test the strength of Federal positions the Confederates launch an assault against a portion of Knoxville's southern heights. The infantry brigades of Evander M. Law and Jerome Robertson, the 10th Georgia Infantry, and a brigade of cavalrymen serving as infantry due to the loss of their mounts, are supported by Capt. William Parker's 4 gun artillery battery in an assault against Federal positions on Armstrong's Hill being manned by Col. Daniel Cameron's brigade of infantry (supported by 8 guns of H.T. Thomas' and A.J. Konkle's batteries). After 2 hours fighting the addition of Wolford's Federal cavalry lends sufficient strength to Cameron's position to repulse the Confederates.

Nov. 29: A second engagement is waged at Armstrong's Hill. Law's and Robertson's Rebel brigades and Parker's artillery engages the 24th KY and 65th IL, of Cameron's Brigade and the 104th OH of Reilly's Brigade, supported by Thomas and Konkle's Batteries. This minimal Rebel effort is readily resisted by the Federals. Total casualties for both engagements (Nov. 25 & 29) ~250.

(8) • Nov 29: Assault of Fort Sanders. In a final effort to break the Union defense of Knoxville Longstreet orders a major assault of Fort Sanders at dawn on November 29, 1863. Following a brief artillery bombardment by approximately 17 guns, four (4) Confederate infantry brigades (Wofford’s, Humphrey's, and Bryan's of McLaw's Division and Anderson's of Hood's Division), supported by 3 additional infantry brigades, assault the fort. Defended by about 480 Union troops and 12 pieces of artillery the fort is protected by an abatis of felled trees, a tanglefoot of telegraph wire stretched between dozens of tree stumps in front of the fort, a deep ditch with near vertical walls and an icy parapet. Unable to penetrate the fort’s walls the 4,000 troops of the Rebel assault force are horribly mauled, losing 813 men (129 killed, 458 wounded, 226 captured and missing) in the 20 minute battle. The Federal defenders suffer 13 total casualties (5 killed, 8 wounded).

Topics. This historical marker is listed in this topic list: War, US Civil. A significant historical month for this entry is November 1861.

Location. 35° 56.919′ N, 83° 54.977′ W. Marker is in Knoxville, Tennessee, in Knox County. Marker can be reached from Fort Dickerson Road west of Chapman Highway SW, on the left when traveling north. Touch for map. Marker is in this post office area: Knoxville TN 37920, United States of America. Touch for directions.

Editor’s want-list for this marker. The additional text for the "Commander" sidebars would be welcome. • Can you help?
Share This Page.