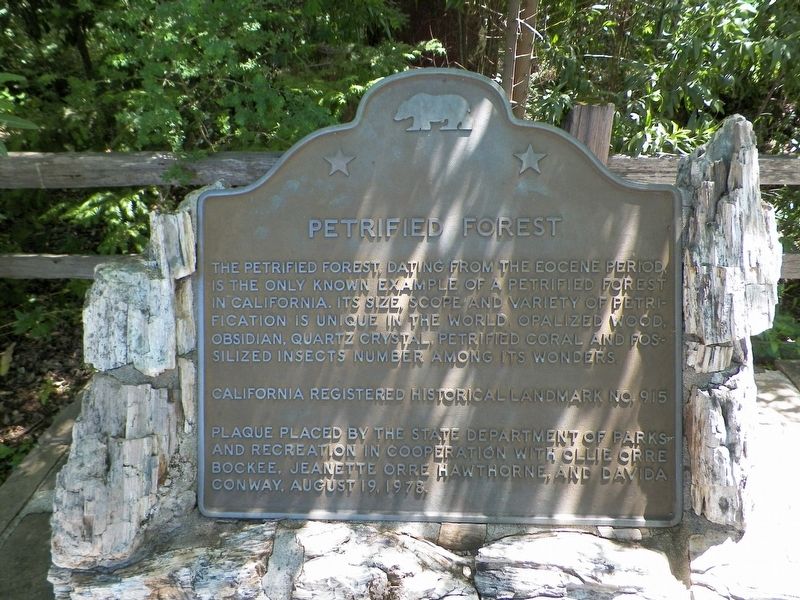 By James King, May 18, 2016
1. Petrified Forest Marker
Inscription.
Petrified Forest. . The petrified forest, dating from the Eocene Period, is the only known example of a petrified forest in California. Its size, scope and variety of petrification is unique in the world. Opalized wood, obsidian, quartz crystal, petrified coral and fossilized insects number among its wonders. . This historical marker was erected in 1978 by California State Department of Parks and Recreation with Ollie Orre Bockee, Jeanette Orre Hawthorne, and Davida Conway. It is in Calistoga in Napa County California

The petrified forest, dating from the Eocene Period, is the only known example of a petrified forest in California. Its size, scope and variety of petrification is unique in the world. Opalized wood, obsidian, quartz crystal, petrified coral and fossilized insects number among its wonders.

Topics and series. This historical marker is listed in these topic lists: Environment • Horticulture & Forestry • Paleontology. In addition, it is included in the California Historical Landmarks series list.

Location. 38° 33.344′ N, 122° 38.305′ W. Marker is in Calistoga, California, in Napa County. Marker can be reached from Petrified Forest Road 0.7 miles east of Porter Creek & Calistoga Roads. The marker is at the front of the visitor center, on the right. Touch for map. Marker is at or near this postal address: 4100 Petrified Forest Road, Calistoga CA 94515, United States of America. Touch for directions. 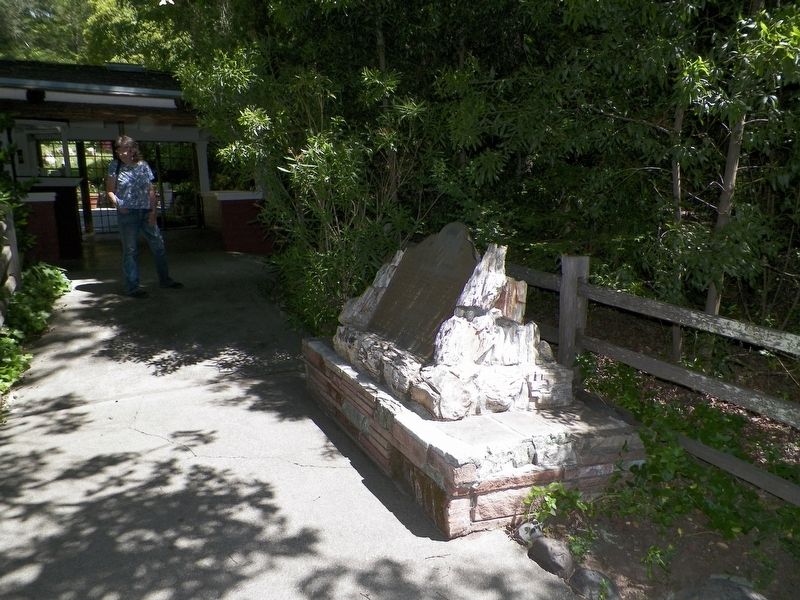 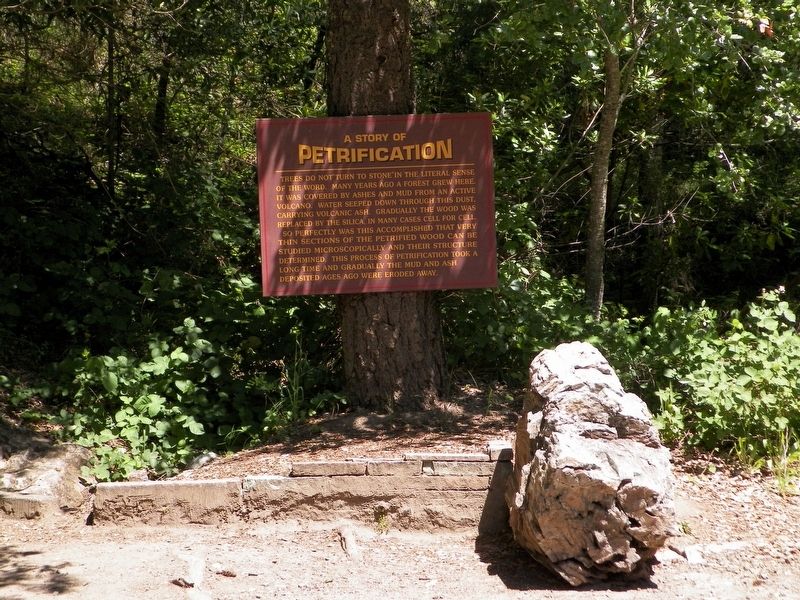 By James King, May 18, 2016
3. A Story of Petrification
Trees do not "turn to stone" in the literal sense of the word. Many years ago a forest grew here. It was covered by ashes and mud from an active volcano. Water seeped down through this dust, carrying volcanic ash. Gradually the wood was replaced by the silica, in many cases cell for cell. So perfectly was this accomplished that very thin sections of the petrified wood can be studied microscopically and their structure determined. This process of petrification took a long time and gradually the mud and ash deposited ages ago were eroded away. 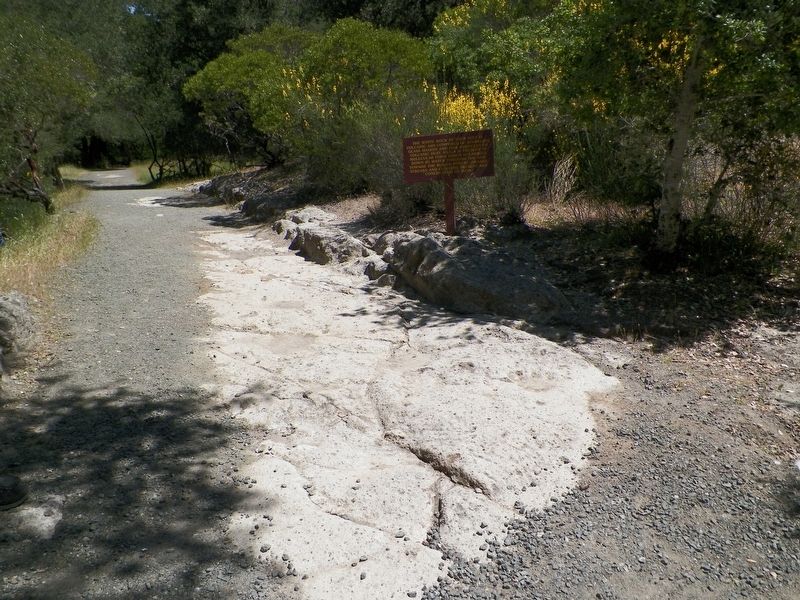 By James King, May 18, 2016
4. The White Rock...
...at your feet is volcanic ash composed of sparkling glass shards and fine particles of volcanic dust. Silica is present in molecular form which is carried down by water through the ash toward the buried forest. Orange streaks and clusters present are concretions of iron. 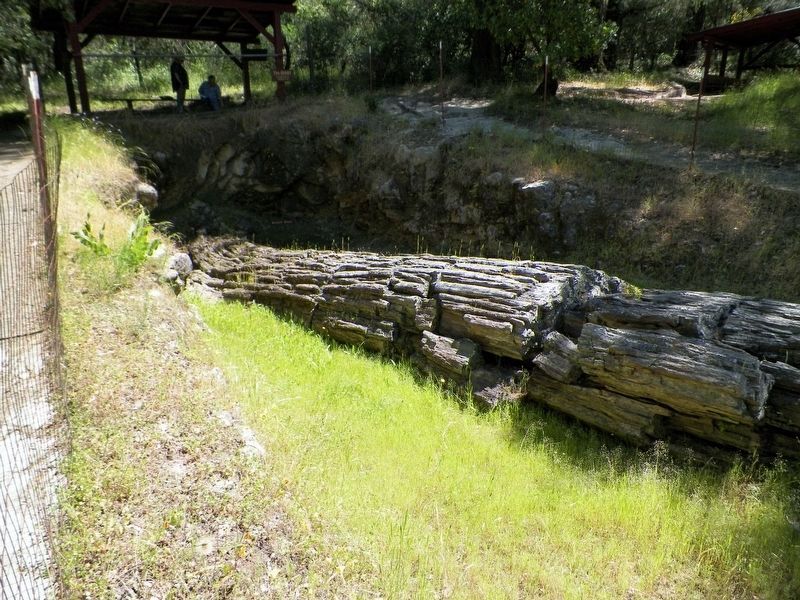 By James King, May 18, 2016
5. The Giant - Length 60 ft., Width 6 ft.
These coastal redwoods fell like matchsticks in the direction of flow from a volcanic explosion.
The source of the blast came from behind the present-day Mt. St. Helena, seven miles to the northeast.
A blanket of volcanic ash covered these trees for several million years. The ground during this time became saturated with water containing dissolved silicon and oxygen or silica from the overlying ash.
The molecules of silica replaced the molecules of wood, turning wood to solid silica, quartz and stone. - From a trailside informational sign 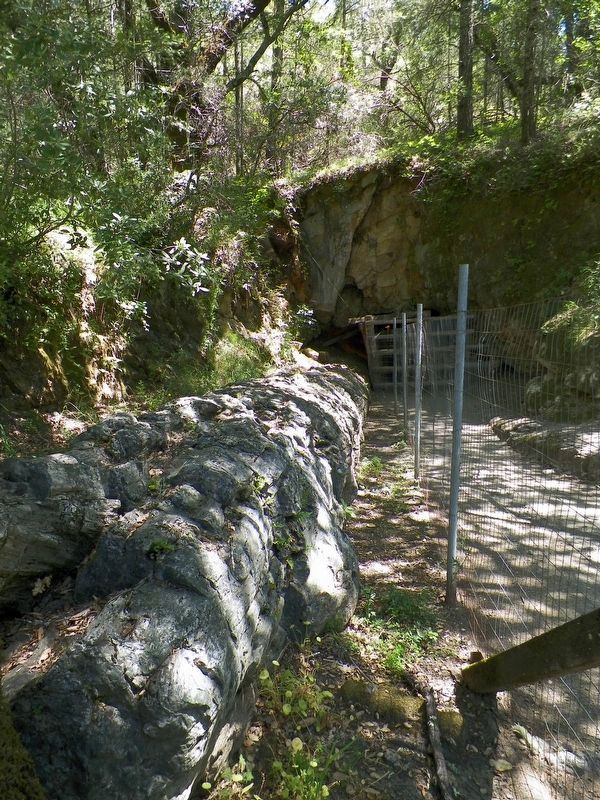