Buy Where You Can Work Campaign & Higher Education 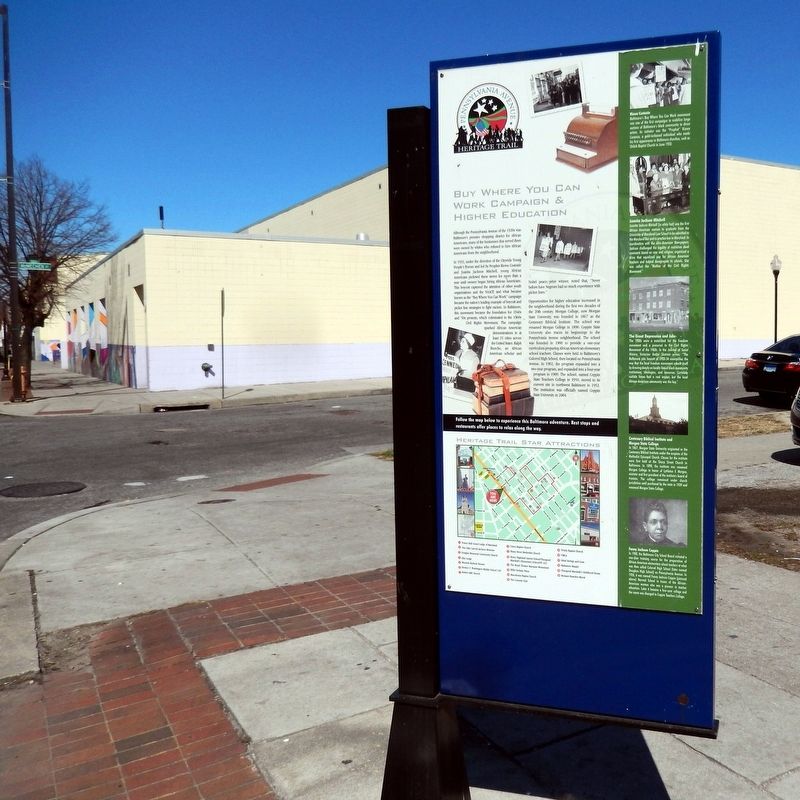 Although the Pennsylvania Avenue of the 1920s was Baltimore’s premier shopping district for African Americans, many of the businesses that served them were owned by whites who refused to hire African Americans from the neighborhood.

In 1933, under the direction of the Citywide Young People’s Forum and led by Prophet Kiowa Costonie and Juanita Jackson Mitchell, young African Americans picketed these stores for more than a year until owners began hiring African Americans. This boycott captured the attention of other youth organizations and the NAACP, and what became known as the “Buy Where You Can Work” campaign became the nation’s leading example of boycott and picket line strategies to fight racism. In Baltimore, this movement became the foundation for 1940s and ‘50s protests, which culminated in the 1960s Civil Rights Movement. The campaign sparked African American demonstrations in at least 35 cities across the United States. Ralph Bunche, an African American scholar and Nobel peace prize winner, noted that, “Never before have Negroes had so much experience with picket lines.” 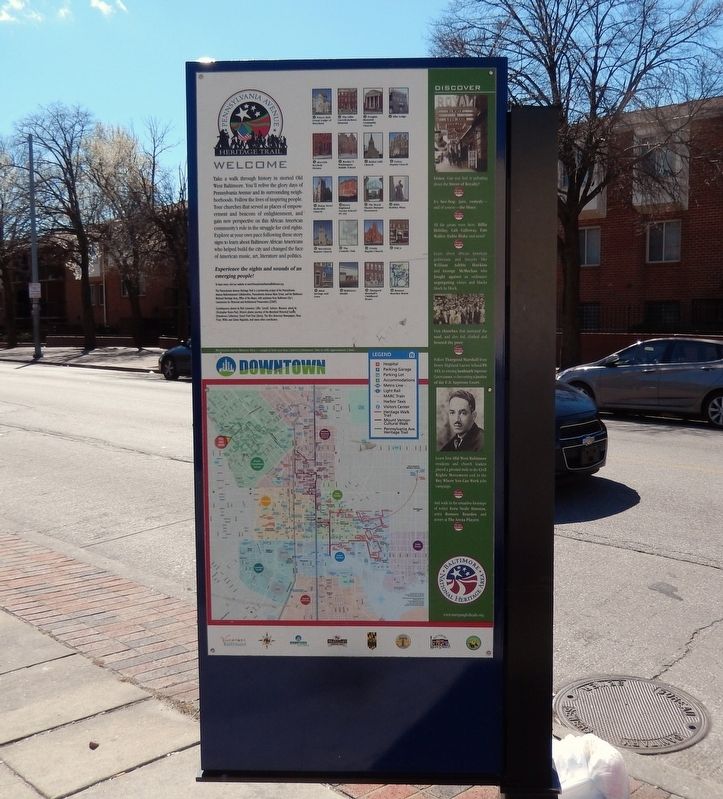 By Don Morfe, March 11, 2017
2. Buy Where You Can Work Campaign & Higher Education Marker-Welcome-Reverse Panel
higher education increased in the neighborhood during the first two decades of the 20th century. Morgan College, now Morgan State University, was founded in 1867 as the Centenary Biblical Institute. The school was renamed Morgan College in 1890. Coppin State University also traces its beginnings to the Pennsylvania Avenue neighborhood. The school was founded in 1900 to provide a one-year curriculum preparing African American elementary school teachers. Classes were held in Baltimore’s Colored High School, then located on Pennsylvania Avenue. In 1902, the program expanded into a two-year program, and expanded into a four-year program in 1909. The school, named Coppin State Teachers College in 1950, moved to its current site in northwest Baltimore in 1952. The institution was officially named Coppin State University in 2004.

(Inscriptions under the images in the right)
Kiowa Costonie
Baltimore’s Buy Where You Can Work movement was one of the first campaigns to mobilize large sections of Baltimore’s black community to direct action. Its initiator was the “Prophet” Kiowa Costonia, a gold-turbaned individual who made his first appearance in Baltimore churches, such as Shiloh Baptist Church in June 1933. 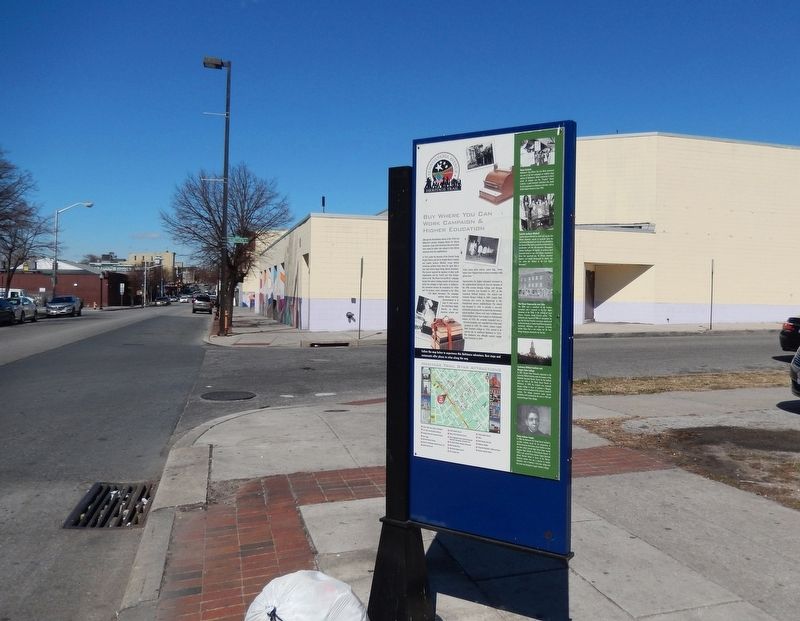 By Don Morfe, March 11, 2017
3. Buy Where You Can Work Campaign & Higher Education Marker
Full view of Pennsylvania Avenue
University of Maryland Law School to be admitted to the Maryland Bar and to practice law in Maryland. In coordination with the Afro-American Newspapers, Jackson challenged the legality of restrictive deed covenants based on race and religion, organized a drive that equalized pay for African American teachers and helped desegregate its schools. She was called the “Mother of the Civil Rights Movement.

The Great Depression and Jobs
The 1930s were a watershed for the freedom movement and a precursor to the Civil Rights Movement of the 1960s. In the Journal of Social History, historian Andor Skotnes writes, “The Baltimore jobs boycott of 1933-34 exemplifies the way that the local freedom movement rebuilt itself by drawing deeply on locally-based black community institutions, ideologies, and resources. Certainly outside forces had a real impact, but the local African-American community was the key. “

Centenary Biblical Institute and Morgan State College
In 1867, Morgan State University originated as the Centenary Biblical Institute under the auspices of the Methodist Episcopal Church. Classes for the institute were first held at the Sharp Street Church in Baltimore. In 1890, the institute was renamed Morgan College in honor of Lyttleton E. Morgan, minister and first president of the institute’s board of trustees. The college renamed under church jurisdiction until purchased by the state in 1939 and renamed Morgan State College.

Fanny Jackson Coppin
In 1900, the Baltimore City School Board initiated a one-year training course for the preparation of African American elementary school teachers at what was then called Colored High School (later named Douglas High School) on Pennsylvania Avenue. In 1926, it was named Fanny Jackson Coppin (pictured above) Normal School in honor of the African-American woman who as a pioneer in teacher education. Later it became a four-year college and the name changed to Coppin Teachers College.

Reverse Side of the Marker
Welcome
Take a walk through history in storied Old West Baltimore. You’ll relive the glory days of Pennsylvania Avenue and its surrounding neighborhoods. Follow the lives of inspiring people. Tour churches that served as places of empowerment and beacons of enlightenment, and gain new perspective on this African American community’s role in the struggle for civil rights. Explore at your own pace following these story signs to learn about Baltimore African Americans who helped build a city and changed the face of American music, art, literature and politics.

Discover
(Inscriptions under the images)
*Listen, Can you feel it pulsating down the Street of Royalty?
*It’s bee-bop, jazz, comedy—and of course—the blues.
*All the greats were here. Billie Holiday, Cab Calloway, Fats Waller, Eubie Blake and more!
*Learn about African American politicians and lawyers like William Ashbie Hawkins and George McMechan who fought against on ordinance segregating whites and blacks block by block.
*Visit churches that nurtured the soul, and also fed, clothed and housed the poor.
*Follow Thurgood Marshall from Henry Highland Garnet School/PS 103, to winning landmark Supreme Court cases, to becoming a justice of the U.S. Supreme Court.
*Learn how Old West Baltimore residents and church leaders played a pivotal role in the Civil Rights Movement and in the Buy Where You Can Work jobs campaign.
*And walk in the creative footsteps of writer Zora Neale Hurston, artist Romare Breaden and actors at the Arena Players.

Topics and series. This historical marker is listed in these topic lists: African Americans • Civil Rights • Education • Industry & Commerce. In addition, it is included in the Historically Black Colleges and Universities 🎓 series list.

Other nearby markers. At least 8 other markers are within walking distance of this marker. Diversity in a Segregated Community (about 500 feet away, measured in a direct line); Thurgood Marshall House (about 500 feet away); Nurturing the Arts (about 600 feet away); Billie Holiday Monument. (about 700 feet away); Community Growth and Faith (about 700 feet away); The Street of Royalty (about 800 feet away); Suffrage Leaders (approx. 0.2 miles away); Take a Stroll Down the Main Street of the African American Experience (approx. 0.2 miles away). Touch for a list and map of all markers in Upton.
Credits. This page was last revised on April 17, 2020. It was originally submitted on March 18, 2017, by Don Morfe of Baltimore, Maryland. This page has been viewed 172 times since then. Photos:   1, 2, 3. submitted on March 18, 2017, by Don Morfe of Baltimore, Maryland. • Bill Pfingsten was the editor who published this page.
Share This Page.