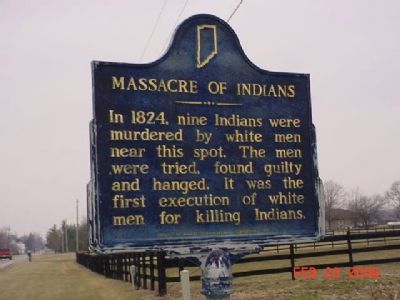 By Jim Meyerholtz, February 22, 2006
1. Massacre of Indians Marker
Inscription.
Massacre of Indians. . In 1824, nine Indians were murdered by white men near this spot. The men were tried, Found guilty and hanged. It was the first execution of white men for killing Indians. . This historical marker was erected in 1966 by Indiana Sesquicentennial Commission. It is in Markleville in Madison County Indiana

In 1824, nine Indians were murdered by white men near this spot. The men were tried, Found guilty and hanged. It was the first execution of white men for killing Indians.

Topics and series. This historical marker is listed in these topic lists: Native Americans • Notable Events. In addition, it is included in the Indiana Historical Bureau Markers series list. 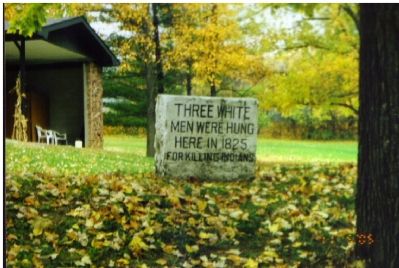 Regarding Massacre of Indians. The hanging site is marked in a park in Pendleton, 7 miles west.

Also see . . .
1. The Fall Creek Massacre - Wikipedia Entry. Excerpt: “The incident sparked national attention as details of the massacre and trial were reported in newspapers of the day. It was the first documented case in which white Americans were convicted, sentenced to capital punishment, and executed for the murder of Native Americans under U.S. law. Of the seven white men who participated in the crime, six were captured. The other white man, Thomas Harper, was never apprehended. Four of the men were charged with murder and two testified for the prosecution. The four accused men were convicted and sentenced to death by hanging. James Hudson was hanged on January 12, 1825, in Madison County, and Andrew Sawyer and John Bridge Sr. were hanged on June 3, 1825. James B. Ray, the governor of Indiana, pardoned John Bridge Jr., the eighteen-year-old son of John Bridge Sr., due to his age and the influence the others may have had on his involvement in the murders. Few details about the victims are known.” (Submitted on February 22, 2006.)

2. Fall Creek Massacre. This audio file was once available on the WBAA radio website but a recent "improvement" discarded the archives. (Submitted on February 22, 2006.)