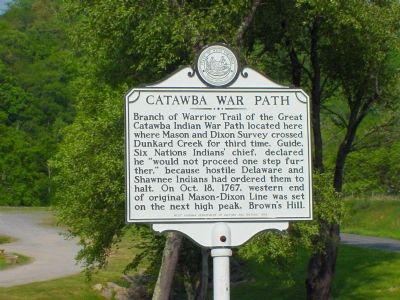 By J. J. Prats, May 15, 2007
1. Catawba War Path Marker
Inscription.
Catawba War Path. . Branch of Warrior Trail of the Great Catawba Indian War Path located here where Mason and Dixon Survey crossed Dunkard Creek for third time. Guide, Six Nations Indians’ chief, declared he “would not proceed one step further,” because hostile Delaware and Shawnee Indians had ordered them to halt. On Oct. 18, 1767, western end of original Mason-Dixon Line was set on the next high peak, Brown’s Hill. . This historical marker was erected in 1990 by West Virginia Department of Culture and History. It is in Pentress in Monongalia County West Virginia

Branch of Warrior Trail of the Great Catawba Indian War Path located here where Mason and Dixon Survey crossed Dunkard Creek for third time. Guide, Six Nations Indians’ chief, declared he “would not proceed one step further,” because hostile Delaware and Shawnee Indians had ordered them to halt. On Oct. 18, 1767, western end of original Mason-Dixon Line was set on the next high peak, Brown’s Hill.

Erected 1990 by West Virginia Department of Culture and History.

Topics and series. This historical marker is listed in these topic lists: Colonial Era • Landmarks • Native Americans • Roads & Vehicles. In addition, it is included in the West Virginia Archives and History series list. A significant historical year for this entry is 1767.

Location. 39° 42.833′ N, 80° 6.783′ W. Marker is in Pentress, West Virginia, in Monongalia County. Marker is on Buckeye Road (County Route 29) north of Mason-Dixon Highway (West Virginia Route 7), on the left when traveling north. It is in the parking lot of the Mason-Dixon Historical Park. Touch for map 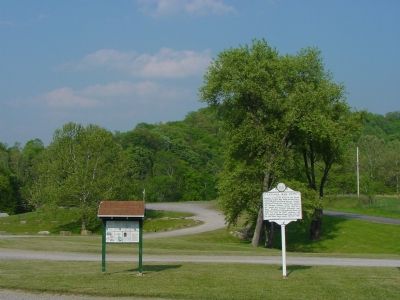 Click or scan to see
this page online
. Marker is in this post office area: Morgantown WV 26501, United States of America. Touch for directions.

Other nearby markers. At least 5 other markers are within 3 miles of this marker, measured as the crow flies. Shanks Mill (within shouting distance of this marker); Border Heroine (approx. ¼ mile away); a different marker also named Catawba War Path (approx. 0.4 miles away); Statler's Fort (approx. 1.3 miles away); Monongalia County / Pennsylvania (approx. 2.8 miles away).

Regarding Catawba War Path. “The Great [Catawba] Indian Warpath, ... was that part of the network of trails in eastern North America developed and used by Native Americans which ran through the Great Appalachian Valley. The system of footpaths ... extended from what is now upper New York State to deep within Georgia. Various Indians traded and made war along the trails, including the Catawba, numerous Algonquian tribes, the Cherokee, and the Iroquois Confederacy. The British traders’ name for the route was derived from combining its name among the northeastern Algonquin tribes, ‘Mishimayagat’ or ‘Great Trail’, with that of the Shawnee and Delaware, ‘Athawominee’ or ‘Path where they go armed.’ ” —quoted from Wikipedia.

“The [Warrior] Trail runs from Greensboro, Pennsylvania, on the Monongahela River in the east to the Ohio River in West Virginia. In prehistoric times it was used to obtain supplies of flint from the Flint Ridge area in Ohio and conduct commerce. From the eastern terminus ... on the Monongahela River the trail is generally east-west about 5 to 6 miles north of the Mason Dixon line ... It extends 45 miles westward across Greene County ... [and] Marshall County, West Virginia ... to the western terminus on the Ohio. The trail follows the divide between watersheds. There are no streams to ford.” —quoted from the Warrior Trail Association website.

A branch of the Warrior Trail crossed what would become the Mason-Dixon line and continued past where this marker is located.

The Mason–Dixon Line forms the southern border of present-day Pennsylvania and the western border of Delaware, separating them from West Virginia and Maryland. It is a perfectly straight line west-to-east where it makes a right angle and continues straight south terminating at the end of the east-west border separating Delaware from Maryland. It was surveyed when the states were still British colonies by Charles Mason and Jeremiah Dixon between 1763 and 1767 as they worked their way from east to west. Maryland and Pennsylvania both claimed the land between the 39th and 40th parallels according to the charters granted to each colony. (The three counties that form present-day Delaware were then part of Pennsylvania.)