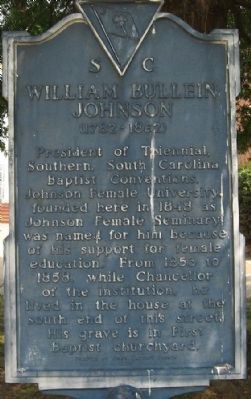 By Ronald Miller, August 18, 2008
1. William Bullein Johnson Marker
Inscription.
William Bullein Johnson. President of Triennial Southern, South Carolina Baptist Conventions. Johnson Female University founded here in 1848 as Johnson Female Seminary was named for him because of his support for female education. From 1853 to 1858, while Chancellor of this institution, he lived in the house at the south end of this street. His grave is in First Baptist Churchyard. . This historical marker was erected in 1970 by First Baptist Church. It is in Anderson in Anderson County South Carolina

President of Triennial Southern, South Carolina Baptist Conventions. Johnson Female University founded here in 1848 as Johnson Female Seminary was named for him because of his support for female education. From 1853 to 1858, while Chancellor of this institution, he lived in the house at the south end of this street. His grave is in First Baptist Churchyard. 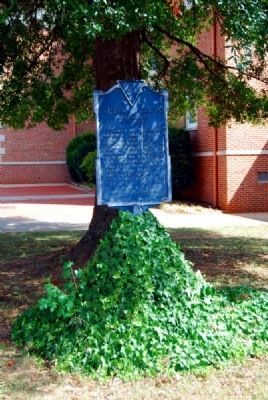 Related marker. Click here for another marker that is related to this marker. The First Baptist Church of Edgefield, a church pastored by William B. Johnson.

Also see . . .
1. History of Anderson First Baptist Church. "On the grounds of the present church office building, formerly the church parsonage, stood Johnson Female Seminary. It was organized in 1848, and named for Dr. William B. Johnson, the first president of the Southern Baptist Convention." (Submitted on August 19, 2008, by Kevin W. of Stafford, Virginia.) 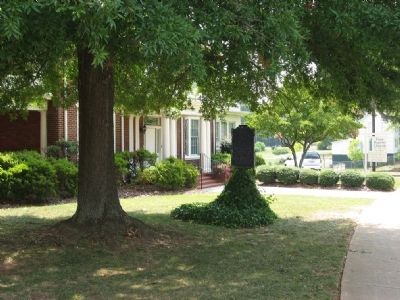 4. William Bullein Johnson, An Advocate of the Priesthood for Believers. pdf file containing much biographical information on Johnson. (Submitted on September 25, 2010, by Brian Scott of Anderson, South Carolina.)

7. Anderson Historic District. Located at 220 E. Morris St, Anderson, SC, the Caldwell-Johnson-Morris Cottage was home to Dr. William Bullein Johnson and is one of the contributing properties in the district. (Submitted on August 19, 2008, by Brian Scott of Anderson, South Carolina.) 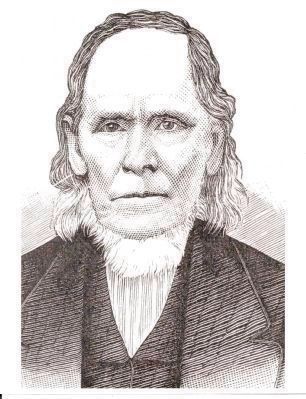 
9. Pilgrims Through the Years: The Bicentennial of First Baptist Church, Savannah, Georgia. Portion of the history of the church that covers the troubling three years Johnson was pastor. (Submitted on November 19, 2008, by Brian Scott of Anderson, South Carolina.)

Additional comments.
1. Caldwell-Johnson-Morris Cottage
A "Columbia Cottage," this home was erected c. 1851 and in 1853 became the home of Dr. William B. Johnson. He was president of the female academy, later to become Johnson University, of which he was chancellor. Long a Baptist leader, he was the first president of the Southern Baptist Convention. (Source: Anderson Historic District National Register nomination form.)
— Submitted September 26, 2010, by Brian Scott of Anderson, South Carolina.
2. Caldwell-Johnson-Morris Cottage
Built c. 1851, by Nancy M. Caldwell, the Johnson-Morris Cottage is a perfect example of the "raised cottage" genera of houses which were built extensively in the 19th century. 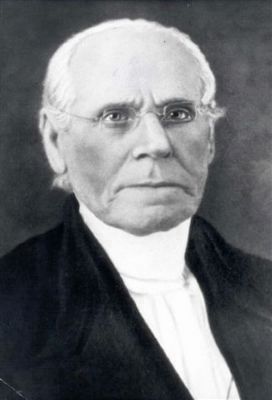 Courtesy of Reneau de Beauchamp
5. William Bullein Johnson
1782-1862
floor level. This central portico is supported by four, square columns and enclosed with balustrade. Entrance, flanked by four-pane sidelights, has six-pane transom above. Located on either side of portico is a pair of nine-over-nine sash windows with louver shutters. Two symmetrically spaced chimneys are set in medium gable roof.

Located on Morris Street, facing Manning Street, the house stand out for several blocks due to its situation as an "island" with access streets on all sides. Originally the house stood on a four-acre lot, however, the present lot is still quite spacious. Dimensions of present lot are 100 feet on the front, 101 feet on back and 164 feet along the sides.

In 1804 William Bullein Johnson, successful young lawyer of Beaufort, South Carolina, was caught up in the religious revival which swept through the area's Baptist churches. Following this spiritual experience, Johnson abandoned his law practice to serve as a Baptist minister throughout South Carolina. He was also chaplain for South Carolina College and pastor of the Baptist Church of Savannah, Georgia. 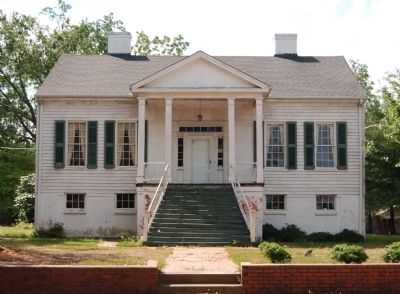 By Brian Scott, August 23, 2008
6. Caldwell-Johnson-Morris Cottage (ca. 1851)
220 East Morris Street
North (Front) Facade
activity, Dr. Johnson was credited by Luther Rice as having initiated the idea of the first Baptist Triennial Convention organized in Philadelphia in 1814. This convention was the first effort to unity the scattered, unorganized Baptists of America into one concerted drive for foreign missions and Baptist educational institutions. Johnson later became president of the Triennial Convention and remained an active member for 30 years.

Knowing that the Triennial Convention could not survive without organized support from Baptists within the individual states Johnson became a foremost advocate of the South Carolina Baptist Convention and served as its president from 1825-1853. 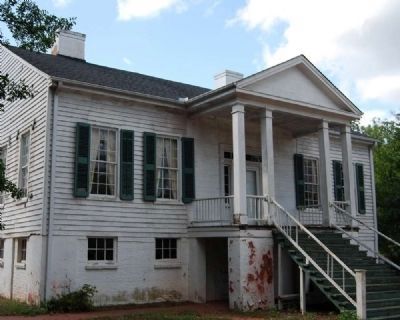 By Brian Scott, August 23, 2008
7. Caldwell-Johnson-Morris Cottage (ca. 1851)
Northeast Elevation
as principal of the city's two academies (male and female) from 1822 until 1830 when he began a twenty-two year career as principal of Edgefield Female Academy. In 1853, Dr. Johnson assumed the role of chancellor and teacher at Johnson Female University, Anderson, South Carolina, forerunner of today's Anderson College. Dr. Johnson held this position until his retirement in 1858.

"...the Johnson Morris House in Anderson, because of its total site, its relative completeness of fabric, the general soundness of that fabric and the relative ease with which it can be rehabilitated is probably the best standing example of mid-nineteenth residential architecture available for immediate consideration. That is not to say that it is a 'great' work; it is a good, vernacular work, and, for my part, that much more worth of preservation. We tent to concentrate on 'great' works far too frequently, and are, therefore, losing the much larger and more significant substratum of sound vernacular architecture -- of all periods -- which loss will be noticed, as a serious gap, in our material history some years hence. I sincerely hope that Johnson-Morris house can be preserved and restored, together with the upgrading 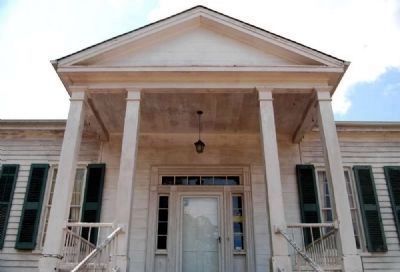 By Brian Scott, August 23, 2008
8. Caldwell-Johnson-Morris Cottage (ca. 1851)
North (Front) Portico
of the surrounding neighborhood." (Source: National Register nomination form.)
— Submitted October 4, 2010, by Brian Scott of Anderson, South Carolina.
3. Caldwell-Johnson-Morris Cottage, 220 E. Morris St.
The Caldwell-Johnson-Morris Cottage was built c. 1851 by Nancy M. Caldwell, a widow of a circuit judge. In 1853, she sold the home to Dr. William Bullein Johnson, a Baptist minister and educator who was credited for the founding of several churches and schools in South Carolina as well as being a pioneer in promoting the education of women. Dr. Johnson assumed the role of chancellor and teacher at Johnson Female University, the forerunner of Anderson University. In 1858 the home was sold again, this time to Mrs. Edward Morris and her four daughters, who were from Charleston. The Morris family occupied the home for seventy years. In 1974 the house was opened as a Museum and was converted into the Morris Street Tea Room in 1980. (Source: www.downtownandersonsc.com.)
— Submitted October 5, 2010, by Brian Scott of Anderson, South Carolina.
4. Rev. William B. Johnson, D.D.
William Bullein Johnson was born at Georgetown, S.C., June 13, 1782. During his minority, he prosecuted 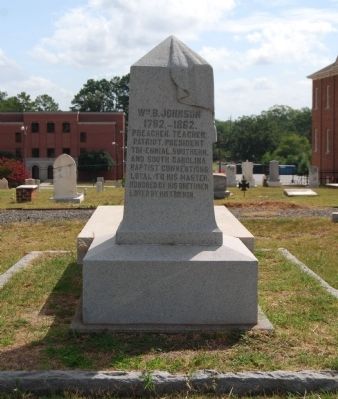 By Brian Scott, August 23, 2008
9. William Bullein Johnson Tombstone -
Anderson First Baptist Church Cemetery
Wm. B. Johnson
1782-1862
Preacher, Teacher Patriot, President
Tri-ennial, Southern and South Carolina
Baptist Conventions
Loyal to His Master
Honored by his Brethren
Loved by His Friends
studies with reference to the profession of law; but having, in the year 1803, removed to Beaufort, he became a subject of converting grace, and his life-purpose was changed. After his baptism by the Rev. Joseph B. Cook, the church at Beaufort called him to the public exercise of his gifts as a preacher of the gospel. About the year 1805, he was ordained as pastor of the Baptist Church at Euhaw. Subsequently, for the sake of better literary advantages, he removed to Columbia, where, in addition to studies with Dr. Maxcy, President of the South Carolina College, he was successful in organizing a Baptist Church. In 1811, he succeeded the Rev. Dr. Holcombe as pastor of the church in Savannah, Georgia. In 1823, he took charge of the Academy at Greenville, where, during eight years, he both taught and preached, being esteemed in both departments as a man of great ability and learning. In 1831, he accepted a call to the pastorate of the church at Edgefield Court-house, and, by invitation of the Trustees, assumed the office of Principal of the Female Academy at the same place. In that field of labor, through more than twenty years, the church prospered under his ministry, and his reputation as a teacher was of the highest order. His last years were spent in Greenville, where, October 2, 1862, he finished a life of faith in triumphant hope. 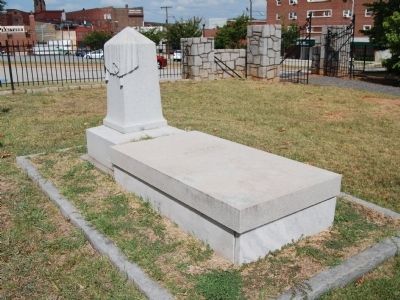 By Brian Scott, August 23, 2008
10. William Bullein Johnson Tombstone - Reverse
Anderson First Baptist Church Cemetery
the cause of Christian Missions, and became an earnest co-worker with that noble pioneer, the Rev. Luther Rice. In 1841, he was elected President of the General Convention, then assembled in Baltimore. As a presiding officer, in various deliberative bodies, he was unsurpassed in dignity, moderation, and efficiency. He was respected by all who knew him as a man of solid excellence. (Source: The Missionary Jubilee: An Account of the Fiftieth Anniversary of the American Baptist Missionary Union, at Philadelphia, May 24, 25, and 26, 1864 by the American Baptist Missionary Union (1869) pg 138.)
— Submitted September 26, 2010, by Brian Scott of Anderson, South Carolina. 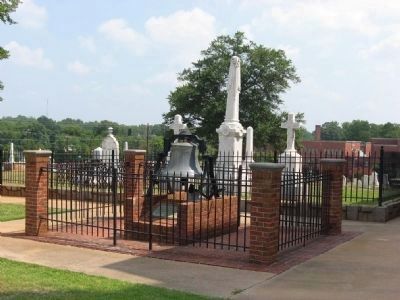