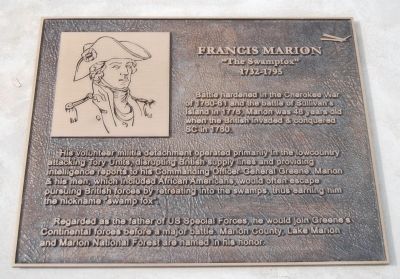 Photographed By Brian Scott, August 24, 2008
1. Francis Marion Marker
Inscription.
Francis Marion. "The Swamp Fox". Battle hardened in the Cherokee War of 1760-61 and the battle of Sullivan's Island in 1776, Marion was 48 years old when the British invaded and conquered SC in 1780. , His volunteer militia detachment operated primarily in the lowcountry attacking Tory Units, disrupting British supply lines and providing intelligence reports to his Commanding Officer - General Greene. Marion and his men, which included African Americans, would often escape pursuing British forces by retreating into the swamps, thus earning him the nickname "swamp fox." , Regarded as the father of US Special Forces, he would join Greene's Continental forces before a major battle. Marion County, Lake Marion, and Marion National Forest are named in his honor. . This historical marker was erected in 2006. It is in Greenville in Greenville County South Carolina

Regarded as the father of US Special Forces, he would join Greene's Continental forces before a major battle. Marion County, Lake Marion, and Marion National Forest are named in his honor.

Topics. This historical marker is listed in these topic lists: African Americans • Forts and Castles • Native Americans • War, US Revolutionary. A significant historical year for this entry is 1776. 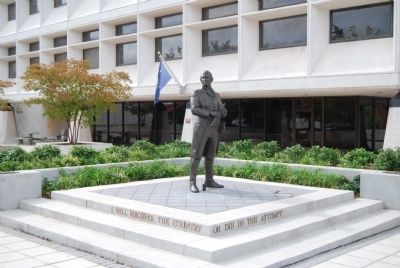 Photographed By Brian Scott, August 24, 2008
2. Nathanael Greene Park
The marker is located at the left end of the bench surrounding Greene.

Click or scan to see
this page online
County. Marker is on South Main Street (State Highway 124) near East Broad Street. Touch for map. Marker is in this post office area: Greenville SC 29605, United States of America. Touch for directions.

More about this marker. Marker is one of three surrounding the statue of Nathanael Greene located at the intersection of Main and Broad Streets, beside the Greenville News building and across from the Peace Center for the Performing Arts.

Also see . . .
1. List of Places Named for Francis Marion. This is a list of places named after Francis Marion, a Brigadier General from South Carolina in the American Revolutionary War. He had more places named after him, than any other Revolutionary Soldier, with the exception of George Washington. (Submitted on August 28, 2008, by Brian Scott of Anderson, South Carolina.)

2. Wikipedia Entry: Francis Marion. Francis Marion (February 26, 1732 – February 27, 1795) was a lieutenant colonel in the Continental Army and later brigadier general in the South Carolina Militia during the American Revolutionary War. (Submitted on August 28, 2008, by Brian Scott of Anderson, South Carolina.)

Additional commentary.
1. Francis Marion and The Patriot
There are many who believe that Francis Marion served as the inspiration for Mel Gibson's character in The Patriot. In fact, early drafts of the film have the Gibson character named Francis Marion. Marion was dropped from the script due to him being a slave owner. Reports surface from time to time that he was cruel to his slaves, beat and raped them. No historical evidence has been uncovered to support these claims. However, their very existence was enough for the producers of the film to serve as the basis for his removal. Gibson's character thus became a combination of Marion and Sumter and Pickens. Note To Editor only visible by Contributor and editor
— Submitted August 28, 2008, by Brian Scott of Anderson, South Carolina.
Credits. This page was last revised on December 13, 2019. It was originally submitted on August 28, 2008, by Brian Scott of Anderson, South Carolina. This page has been viewed 1,965 times since then and 42 times this year. Photos:   1, 2. submitted on August 28, 2008, by Brian Scott of Anderson, South Carolina. • Kevin W. was the editor who published this page.
Share this page.