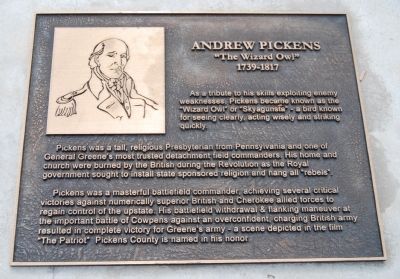 By Brian Scott, August 24, 2008
1. Andrew Pickens Marker
Inscription.
Andrew Pickens. "The Wizard Owl". . As a tribute to his skills exploiting enemy weaknesses, Pickens became known as the "Wizard Owl" or "Skyagunsta" - a bird known for seeing clearly, acting wisely and striking quickly. . . Pickens was a tall, religious Presbyterian from Pennsylvania and one of General Greene's most trusted detachment field commanders. His home and church were burned by the British during the Revolution as the Royal government sought to install state sponsored religion and hang all "rebels." . . Pickens was a masterful battlefield commander, achieving several critical victories against numerically superior British and Cherokee allied forces to regain control of the upstate. His battlefield withdrawal & flanking maneuver at the important battle of Cowpens against an overconfident, charging British army resulted in complete victory for Greene's army - a scene depicted in the film "The Patriot." Pickens County is named in his honor. . This historical marker was erected in 2006. It is in Greenville in Greenville County South Carolina

As a tribute to his skills exploiting enemy weaknesses, Pickens became known as the "Wizard Owl" or "Skyagunsta" - a bird known for seeing clearly, acting wisely and striking quickly.

Pickens was a tall, religious Presbyterian from Pennsylvania and one of General Greene's most trusted detachment field commanders. His home and church were burned by the British during the Revolution as the Royal government sought to install state sponsored religion and hang all "rebels."

Pickens was a masterful battlefield commander, achieving several critical victories against numerically superior British and Cherokee allied forces to regain control of the upstate. His battlefield withdrawal & flanking maneuver at the important battle of Cowpens against an overconfident, charging British army resulted in complete victory for Greene's army - a scene depicted in the film "The Patriot." Pickens County is named in his honor. 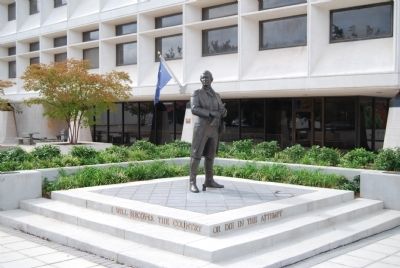 More about this marker. Marker is one of three surrounding the statue of Nathanael Greene located at the intersection of Main and Broad Streets, beside the Greenville News building and across from the Peace Center for the Performing Arts.

Also see . . .
1. Andrew Pickens. Andrew Pickens (September 13, 1739 – August 11, 1817) was a militia leader in the American Revolution and a member of the United States House of Representatives from South Carolina. (Submitted on August 28, 2008, by Brian Scott of Anderson, South Carolina.)

2. Nathanael Greene. Nathanael Greene (August 7, 1742 – June 19, 1786) was a major general of the Continental Army in the American Revolutionary War. (Submitted on September 11, 2009, by Brian Scott of Anderson, South Carolina.) 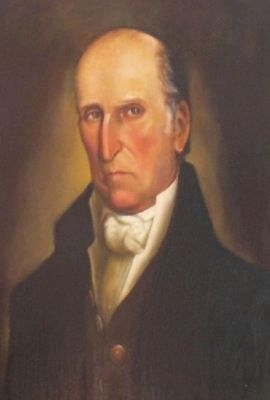 4. The Patriot (2000 film). The Patriot is a 2000 epic war film directed by Roland Emmerich, written by Robert Rodat, and starring Mel Gibson and Heath Ledger. (Submitted on September 11, 2009, by Brian Scott of Anderson, South Carolina.)

Additional comments.
1. Andrew Pickens (1739-1817)
Pickens, Andrew, (grandfather of Francis Wilkinson Pickens), a Representative from South Carolina; born in Paxton, Bucks County, Pa., September 13, 1739; attended the common schools; moved with his parents to the Waxhaw settlement in South Carolina in 1752; served in the provincial militia in the campaign against the Cherokee Indians in 1760; entered the Revolutionary Army as captain of militia and attained the rank of brigadier general; commanded an expedition against the Cherokee Indians in 1782; member of the state house of representatives 1781-1794; one of the commissioners named to settle the boundary line between South Carolina and Georgia in 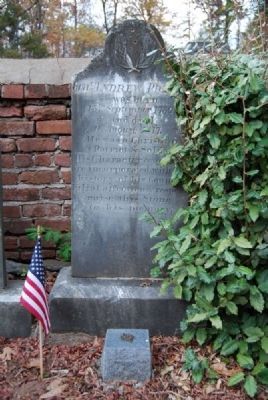 By Brian Scott, November 28, 2008
4. Andrew Pickens Tombstone -
Old Stone Church, Clemson, SC
1787; member of the state constitutional convention in 1790; elected as an Anti-Administration candidate to the Third Congress (March 4, 1793-March 3, 1795); appointed major general of militia in 1795; unsuccessful candidate for election to the United States Senate in 1797; member of the state house of representatives 1800-1812; declined the nomination for governor in 1812; died in Tomassee, Pendleton District, S.C., August 11, 1817; interment in Old Stone Churchyard, near Pendleton, S.C.
— Submitted September 11, 2009, by Brian Scott of Anderson, South Carolina.
2. Andrew Pickens Helps to Defeat the British
When Sumter rode northward into the mountains to nurse his wounded shoulder, another gallant Carolinian came into the field. This was Andrew Pickens. He was a Scot, and as a child, came to the Waxhaws settlement with his parents. Before he was twenty-one he took part in the war against the Cher- okees. At the beginning of the Revolution he was made captain of a company of riflemen. He also sat in the legislature of the new state of South Carolina. In 1779 Pickens assembled a body of five hundred men from the upper country, led them across the Savannah River into Georgia, and defeated a much larger British force at Kettle Creek.

Pickens Refuses to Fight for the 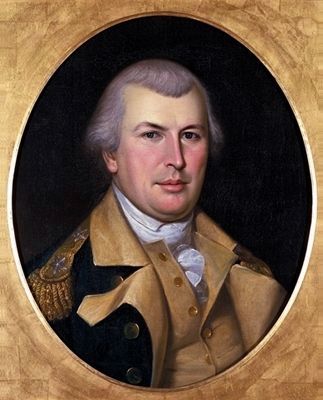 By Charles Wilson Peale, 1783
5. Maj. Gen. Nathanael Greene
(1742–1786)
King — When the British captured Charles Town, Pickens retired to his plantation on the upper Saluda River, in the western highlands. With a great many others he agreed not to fight any longer against the king. The British promised to let him dwell at home in peace. Then came the cruel order of Cornwallis that he must fight for the king, and this was followed by an attack on the part of a roving company of British, who plundered his home and destroyed his possessions. Pickens seized his sword and mounted his old war horse. His clear eyes flashed fire, his lips became more firmly fixed, and his honest, open countenance was clouded with anger. He told the British that they had not kept their word, and that he meant to fight them. A British officer told Pickens that he would fight with a halter around his neck. By this, they meant that if the British captured him they would hang him. He declared that their treatment of him had set him free from his former promise, and so he rode away to the battlefield.

Pickens usually wore a three-cornered hat. His hair was put smoothly back and was tied in a long roll called a queue. He wore heavy silver spurs, and the two large pistols in his holsters were bright with silver ornaments.

Battle of Cowpens — When Pickens left his home on the Saluda to take part in the war, Gen. Daniel Morgan, of Virginia, was 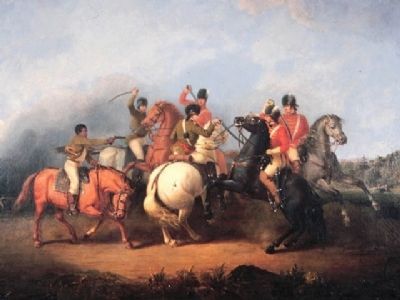 By William Ranney, 1845
6. Battle of Cowpens
marching southward across the upper Catawba and Broad rivers. Pickens and his men joined Morgan on the Pacolet River, in Union County. Early in January, 1781, Tarleton with his legion came sweeping across the Broad and moved up the western bank of that stream in search of Morgan. The latter arranged his force of about nine hundred men at the Cowpens, in the present Cherokee County. The field sloped gradually upward. At the top of the long ascent were Morgan's old, experienced soldiers. Farther down the slope, in front, were the riflemen commanded by Pick- ens. They stood in an irregular fashion behind the trees on the slope. The skirmishers in front were led by McDowell, of North Carolina, and

Cunningham, of Georgia. Pickens himself moved around from soldier to soldier, giving his orders in a cool, quiet way. He told them that if the British cavalry advanced, every third man must fire, while two held their loaded rifles in reserve. They were advised to take careful aim and fire low. As a last word, Pickens told his men to mark for their first fire the officers of the advancing line. These would be known by the epaulettes or badges which they wore upon their arms or shoulders.

Tarleton's force amounted to about eleven hundred men. He had also two cannon. These opened fire upon the Americans, and at the same time the British foot soldiers and horsemen moved forward

By Brian Scott
7. Hopewell -
Pickens' Plantation After the War
Now on the Campus of Clemson University
with a rush and with loud shouts. It was about the hour of sunrise and the red coats of the British soldiers were seen advancing through the smoke that was rolling from the mouths of the cannon. When the enemy had come within fifty yards of the line of Pickens, the latter gave the word. With a crash the mountain rifles roared out as if one great gun had been fired. Again and again the rifles spoke, and down fell the officers who were leading the British attack. Then the men who carried the muskets in Tarleton's line staggered. As they paused, another volley from the Americans stretched many of them upon the ground. The force of Tarleton's attack was broken. The American victory was really won among the trees in the front part of the field where the men of Pickens fought.

But Tarleton would not give up. He dashed forward on his horse and cheered his men. They fixed bayonets and advanced. Pickens and his men fell slowly back and the British met the American rear line near the top of the long slope. Then William Washington and James McCall swept around with thsir horsemen against the right end of the British line. At the same time Pickens led his men around to the left end of Tarleton's line. There at close range they poured in a deadly volley. The greater part of the British troops threw down their muskets and surrendered. A few of them escaped from the field, among them Tarleton himself. The victory of the Americans was complete. Eight hundred British soldiers were lost. Tarleton's bloody work was brought to a sudden end, and a staggering blow was given to Cornwallis himself. One third of his army was snatched from him by the victory at the Cowpens. The Carolina riflemen, led by Pickens, played the chief part in winning that glorious field.