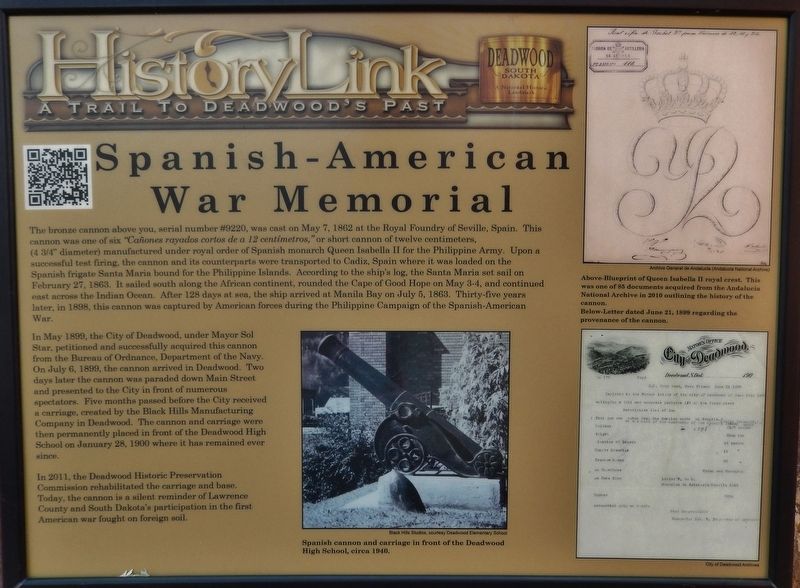 By Cosmos Mariner, July 11, 2018
1. Spanish-American War Memorial Marker
Inscription.
or short cannon of twelve centimeters, (4 ¾” diameter) manufactured under royal order of Spanish monarch Queen Isabella II for the Philippine Army. Upon a successful test firing, the cannon and its counterparts were transported to Cadiz, Spain where it was loaded on the Spanish frigate Santa Maria bound for the Philippine Islands. According to the ship's log, the Santa Maria set sail on February 27, 1863. It sailed south along the African continent, rounded the Cape of Good Hope on May 3-4, and continued east across the Indian Ocean. After 128 days at sea, the ship arrived at Manila Bay on July 5, 1863. Thirty-five years later, in 1898, this cannon was captured by American forces during the Philippine Campaign of the Spanish-American War. . . In May 1899, the City of Deadwood, under Mayor Sol Star, petitioned and successfully acquired this cannon from the Bureau of Ordnance, Department of the Navy. On July 6, 1899, the cannon arrived in Deadwood. Two days later the cannon was paraded down Main Street and presented to the City in front of numerous spectators. Five months passed before the City received a carriage, created by the Black Hills Manufacturing Company in Deadwood. The cannon and carriage were then permanently placed in front of the Deadwood High School on January 28, 1900 where it has remained ever since. . . In 2011, the Deadwood Historic Preservation Commission rehabilitated the carriage and base. Today, the cannon is a silent reminder of Lawrence County and South Dakota's participation in the first American war fought on foreign soil. . This memorial was erected by The Deadwood Historic Preservation Commission. It is in Deadwood in Lawrence County South Dakota

The bronze cannon above you, serial number #9220, was cast on May 7, 1862 at the Royal Foundry of Seville, Spain. This cannon was one of six
Share This Page.