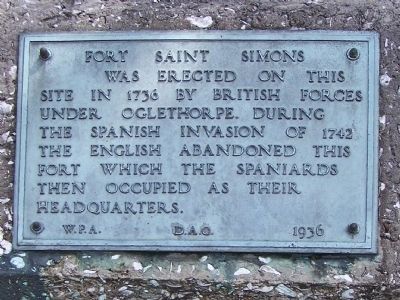 By Mike Stroud, September 20, 2008
1. Fort Saint Simons Marker
Inscription.
Fort Saint Simons. .
Was erected on this site in 1736 by British Forces under Oglethorpe. During the Spanish invasion of 1742 the English abandoned this fort which the Spaniards then occupied as their headquarters. W.P.A. D.A.C. 1936. . This historical marker was erected in 1936 by Works Progress Administration. It is in St. Simons Island in Glynn County Georgia

Was erected on this
site in 1736 by British Forces
under Oglethorpe. During
the Spanish invasion of 1742
the English abandoned this
fort which the Spaniards
then occupied as their
headquarters.
W.P.A. D.A.C. 1936

Topics and series. This historical marker is listed in these topic lists: Colonial Era • Forts and Castles • Notable Places. In addition, it is included in the Works Progress Administration (WPA) projects series list.

Other nearby markers. At least 8 other markers are within walking distance of this marker. Delegal's Fort (here, next to this marker); Old Spanish Garden (about 700 feet away, measured in a direct line); Welcome to St. Simons Light! (approx. 0.3 miles away); Couper's Point (approx. 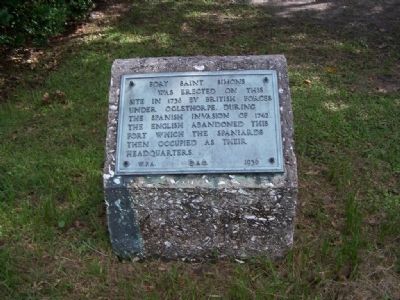 Regarding Fort Saint Simons. On the afternoon of July 5th, 1742, a mighty Spanish fleet attacked with the incoming tide, fighting its way furiously through the thin gauntlet of British ships and the cannon of Fort St. Simons. After fierce fighting, often hand-to-hand as the Spanish unsuccessfully attempted to board several British ships, the Spanish fleet anchored in St. Simons Sound and began landing troops a mile and a half northwest of the fort. As the Spanish were landing, Oglethorpe evacuated the southern end of St. Simons Island. After spiking the cannon, destroying equipment and burning the boats too damaged to escape to South Carolina, the soldiers retreated with their families up the Military Road northward to Frederica. 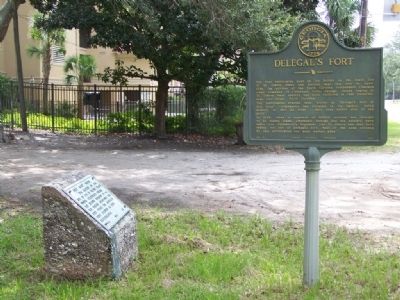