The Siege of Fort Mifflin 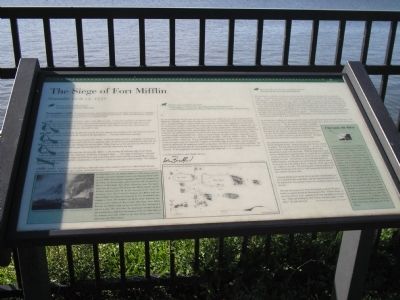 Report from the British Side:
Journal of Captain John Montresor

November 10th: We expressed our batteries against Mud Island Fort, the whole consisting of two 12 pounders, six 24 pounders, guns and one 13 inch mortar for throwing pounder shot and carcasses. Rebels from two batteries fired five guns, all silenced by noon, except one which was not silenced at dark.
11th: A west, northwest wind and as cold as in the depth of winter. A white frost and the ice one inch thick. Our artillery sergeant killed in our battery, which continued firing all day and blew up the center block house in the fort. This night at high at 10 arrived two brigs and two sloops loaded with provisions and ammunition, which supplies the army with provisions three weeks to come.
12th: From now to three P.M. the rebel fire from the Fort was silenced, but at half past three they opened one gun from gun battery and one from the shoulder of the Mud Battery … The lower Block House declining.
14th: The batteries continued as usual against Fort Island. A floating battery with two 32 pounders, we sent out of Schuylkill and came within 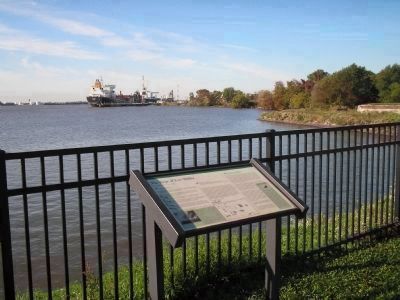 Photographed By Bill Coughlin, October 11, 2008
2. Marker on the Delaware River
Marker is located in the Water Battery at Fort Mifflin, near the picnic grounds.

Click or scan to see
this page online
300 yards of the Fort at daybreak where she opened very successfully for two hours but was by the Fort. These shot went through her and one killed. Rebels fired most of this day from the embrasure in the shoulder of the Mud Battery and two guns from the gun battery which they advanced in the night.
15th: Wind westerly, weather very fine, but very cold. Before 11 this morning the following ships of war moved nearer the chevaux-de-frise: Isis, Somerset, Roebuck, Liverpool, Pearl … This night at half past 11, the rebels at fire to and consumed the Fort except the block houses and commanding officers house and then evacuated Mud Island leaving their colors standing and fled so precipitately as to leave us 11 pieces of cannon not spiked [damaged]. Fort Mifflin evacuated by the rebels.
16th: At half past 7 this morning, a boat with some sailors landed at the Fort on Mud Island and took down the rebel colors which were left standing and hoisted our own.

Report from the American Side:
16 November 1777 from the sloop Speedwell, off Red Bank, NJ
Colonel William Bradford to Thomas Wharton, President, State of Pennsylvania

Sir:
My last informed you that the enemy had been cannonading Fort Mifflin for days, and had begun again on Wednesday, Thursday and Friday, they kept up a very bad fire, and killed several of our men, and wounded 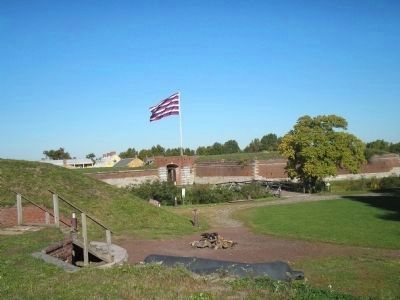 Photographed By Bill Coughlin, October 11, 2008
3. Main Gate of Fort Mifflin
This photo of Fort Mifflin's main gate was taken from in front of the marker.
many. Saturday morning we opened a battery of two guns near Tench Frances’ house against the Somerset of 64, the Isis of 50, another 50 gun ship, two large frigates, their galley, when our fleet also engaged and a most furious fire from all sides continued ‘til near dark, when the ships dropped down. While the ships and galleys were engaged, the large East India ship [the Vigilant] that was cut down came up behind Hog Island and got close to the Fort, she with the five batteries tore the Fort all to pieces and knocked down all the embrasures, killing many of our people and wounding more. About 12 o’clock at night, the officers finding it impossible to stand it any longer, set fire to the barracks, etc. and brought out the people. Thus, Fort Mifflin is fallen. What will become of our fleet? I know not. To lay under Red Bank is impossible. If they retreat to Lad’s Cove, a battery or two on League Island will reach them. I suppose we shall have the ships up again today. Our fire rafts are almost all destroyed by the tempestuous weather we have had. Our men in great want of shoes and clothes. We have received no more rum than the two hogsheads I informed in my last, tho’ Crispin says he expects two more tomorrow. In the engagements the galleys had several men killed and 10 or 12 wounded.

I am Your Excellency’s most Humble Servant,
Wm. Bradford 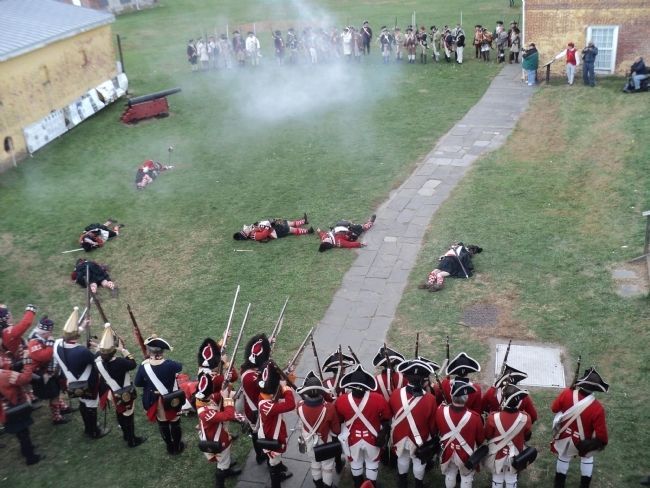 Well, the island, as it is called, is nothing more than a mud flat in the Delaware, being upon the west side of the channel… Our batteries were nothing more than old spars and timber laid up in parallel lines and filled between with mud and dirt. The British batteries in the course of the day would nearly level our works, and we were, like the beaver, obliged to repair our dams in the night. During the whole night, at intervals of a quarter or half an hour, the enemy would let off all their pieces, and although we had sentinels to watch them and at every flash of their guns to cry, "a shot," upon hearing which everyone endeavored to take care of himself, yet they would ever and anon, in spite of all our precaution, cut up some of us. The engineer in the fort was a French officer by the name of Fleury, the same who struck the British flag at the storming of Stony Point. He was a very austere man and kept us constantly employed day and night; there was no chance of escaping form his vigilance… What little provisions we had were cooked by the invalids in our camp and brought to the island in old flour barrels; it was mostly corned beef and hard bread, but it was not much trouble to cook or fetch what we had.

We continued here, suffering cold, hunger and other miseries, till the 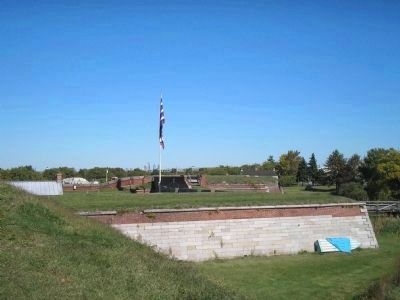 Photographed By Bill Coughlin, October 11, 2008
5. Outside of Fort Mifflin
fourteenth day of November. On that day, at the dawn, we discovered six ships of the line, all sixty-fours, a frigate of thirty-six guns and a galley in a line just below the cheveau-de-frise; a 24 gun ship … her guns said to be all brass twenty-four pounders, and a sloop of six guns in company with her, both within pistol shot of the Fort, on the western side. We immediately opened our batteries upon them, but they appeared to take very little notice of us. We heated some shot, but by mistake 24-pound shot were heated instead of 18, which was the caliber of the guns in that part of the Fort. The enemy soon began their firing upon us and there was music indeed.

The cannonade continued without interruption on the side of the British throughout the day. Nearly every gun in the fort was silenced by midday. Our men were cut up like cornstalks… As soon as it was dark we began to make preparations for evacuating the fort and endeavoring to escape to the Jersey shore. When the firing had in some measure subsided and I could look about me, I found the fort exhibited a picture of desolation. The whole area of the fort was completely ploughed as a field. The buildings of ever kind hanging in broken fragments, and the guns all dismounted, and how many of the garrison sent to the world of spirits, I knew not. If ever destruction was complete, it was here. The surviving part of the 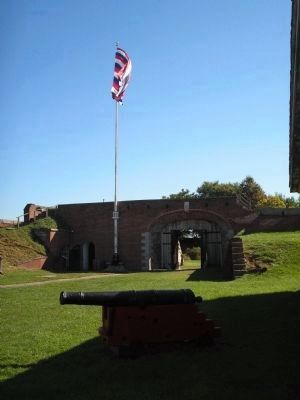 Photographed By Bill Coughlin, October 11, 2008
6. Inside Fort Mifflin
This photo was taken just inside the main gate of Fort Mifflin.
garrison were now drawn off and such of the stores as could conveniently be taken away were carried to the Jersey shore.

I returned directly back into the fort to my party and proceeded to set fire to everything that would burn, and then repaired immediately to the wharf where three batteaux were waiting to convey us across the river.

Here ends the account of as hard and fatiguing a job, for the time it lasted, as occurred during the Revolutionary War. Thomas Paine, in one of his political essays, speaking of the siege and defense of this post says, “They had nothing but their bravery and good conduct to cover them.” He spoke the truth.

Sidebar: In September 1777, the British raised two of the chevaus-de-frise (wooden and metal stockades) sunk in the Delaware River south of Fort Mifflin that had been intended to block their progress. On the 22nd, six British ships sailed upstream and attacked Fort Mercer At Red Bank, New Jersey, across the river. The largest ships were the Augusta with 64 guns, the Merlin with 18, and the Roebuck manned with 44. In the morning of the 23rd, the American navy discovered the Augusta and Merlin had run aground below the upper set of chevaus-de-frise. Immediately they engaged in battle. The Augusta was blown up by American fire, and one report indicated 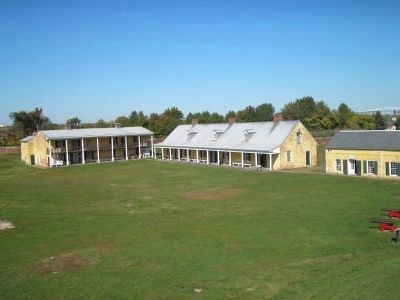 Photographed By Bill Coughlin
7. Soldiers' Barracks and Officers Quarters
These structures were burned by the Americans prior to their evacuation of Fort Mifflin on November 15, 1777. They were reconstructed in the early 19th century.
that at least 150 enemy were killed. Because the British could not free the Merlin, they abandoned it and set it afire. Two days later, the Americans salvaged all guns and supplies they could from the remains of the two ships. Ribs of the Augusta were still visible on the New Jersey shore at the beginning of the 20th century.

Topics. This historical marker is listed in these topic lists: Forts and Castles • Notable Events • Notable Places • War, US Revolutionary. A significant historical month for this entry is September 1777. 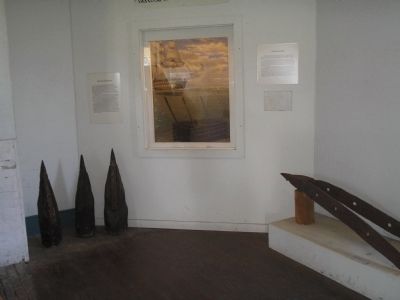 Related markers. Click here for a list of markers that are related to this marker. This series of markers follow the walking tour of Fort Mifflin.

Also see . . .
1. The Fort that saved America. The Official Website of Fort Mifflin on the Delaware (Submitted on October 13, 2008, by Bill Coughlin of Woodland Park, New Jersey.)