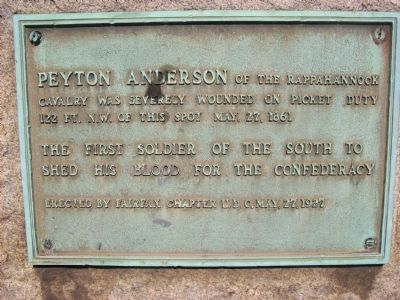 Photographed By James Edward Edmundson, April 1, 2010
1. Peyton Anderson Marker
Inscription.
Peyton Anderson. . , Peyton Anderson of the Rappahannock Cavalry was severely wounded on picket duty 122 ft. N.W. of this spot May 27, 1861. , The first soldier of the South to shed his blood for the Confederacy. . This historical marker was erected in 1927 by Fairfax Chapter, United Daughters of the Confederacy, May 27. It is in Fairfax Virginia

Peyton Anderson of the Rappahannock Cavalry was severely wounded on picket duty 122 ft. N.W. of this spot May 27, 1861.

The first soldier of the South to shed his blood for the Confederacy.

Erected 1927 by Fairfax Chapter, United Daughters of the Confederacy, May 27.

Topics and series. This memorial is listed in this topic list: War, US Civil. In addition, it is included in the United Daughters of the Confederacy series list. A significant historical month for this entry is May 1880. 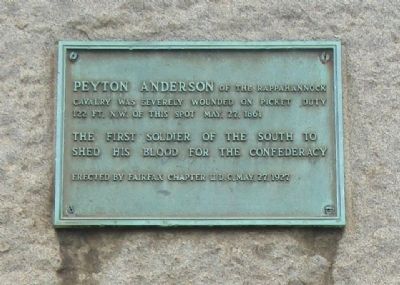 More about this marker. Originally located at the corner of Blake Lane and & Lee Highway, the marker was moved during the widening of Lee Highway, so the “122 ft. S.W. of this spot” is no longer accurate. The marker came to its current location because the owner of the Econo-Lodge was a relative of Anderson and offered its present location if another could not be found.

Lee Highway was known as the Falls Church Road back then. The Confederates were in possession of Fairfax Court House and Peyton Anderson and William Lillard of the 6th Virginia Cavalry were stationed here, about two miles from the town, on lookout for Union soldiers.

Regarding Peyton Anderson. “In the early morning of May 27th, 1861, I, as a boy of fourteen years of age was passing the spot where the Flint Hill and Falls Church roads intersect. At this time there were two Confederate pickets stationed there; one lying in the pine woods nearby and the other on his horse on duty, each dressed in civilian clothes with a feather in their hats.

“I had not gone far down the road before I was met by a squad of cavalry which I counted as boys are wont to do, finding twenty-four men and one Officer.

“They were dressed and equipped so finely that I was sure that they were Union soldiers. I was soon to realize this truth, for as they approached the foot of the hill they spurred their horses into a gallop and soon surrounded the two surprised pickets. 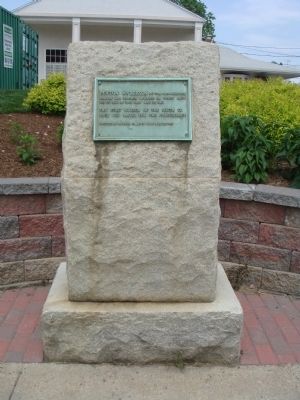 Photographed By J. J. Prats, May 17, 2007
3. Peyton Anderson Marker
friends what I had seen I was again passed by the troop of cavalry, who this time had a prisoner. I have since learned that the bullet found its mark in the person of Peyton Anderson, the one in whose honor this Memorial is today being dedicated, and it gives me a great pleasure to be able to recall the picture of such an historical event, and to contribute to the success of this occasion.”

—From a letter signed by James W. Robey dated May 27, 1927, (the day the marker was dedicated) on file in the Fairfax Research Room of the Fairfax City Public Library.

Payton Anderson was shot in the arm and later recovered. His fellow picket William Lillard was captured.

“In the Amissville neighborhood lived the Anderson family. Peyton Anderson was the first to shed blood for the Confederate cause. A monument to the memory of him was erected by the United Daughters of the Confederacy at Fairfax Court House. Honorable Walton Moore, standing beside the widow and grandchild at the unveiling, made the address.

“Peyton Anderson married Louemma, daughter of Jesse Miller of ‘Poplar Shade’. At this time Mrs. Anderson lives with her daughter, Mrs. Clifford Latham. She is one hundred years young.”

—From the “Amissville” chapter in My Rappahannock (VA) Storybook by Mary Elizabeth Hite, published in 1950. 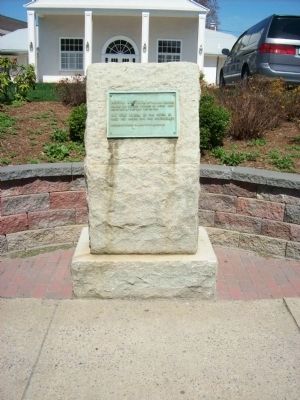 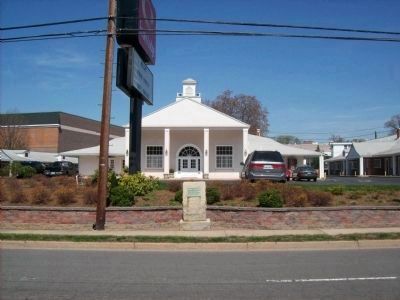 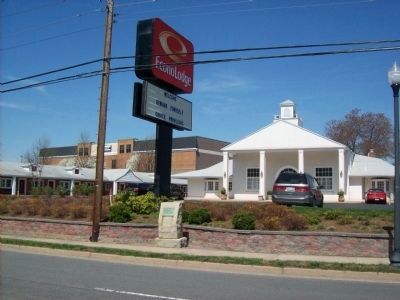