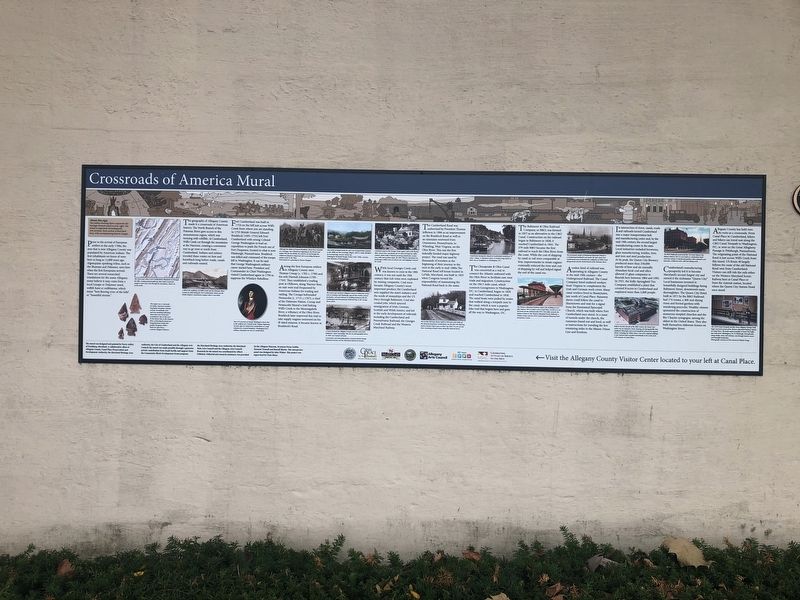 About this sign
The outline drawing above represents the heritage-themed mural to your right. The mural is organized chronologically into sections. Each section is described here, with accompanying historic images..

Prior to the arrival of European settlers in the early 1700s, the area that is now Allegany County was populated by American Indians. The first inhabitants we know of were here as long as 12,000 years ago. Algonquian-speaking tribes, such as the Shawnee and Delaware, were here when the first Europeans arrived. There are several researched translations for the Allegany; many believe it may come from a local Lenape or Delaware word, welhik hane or oolikhanna, which mean "best flowing river of the hills" or "beautiful stream."

The geography of Allegany County made it a crossroads of American history. The North Branch of the Potomac River gave access to this mountainous region, which was teeming with wildlife. At Cumberland, Will's Creek cut through the mountains at the Narrows, creating a convenient way to go west or north from Cumberland. Indians and settlers traveled these routes 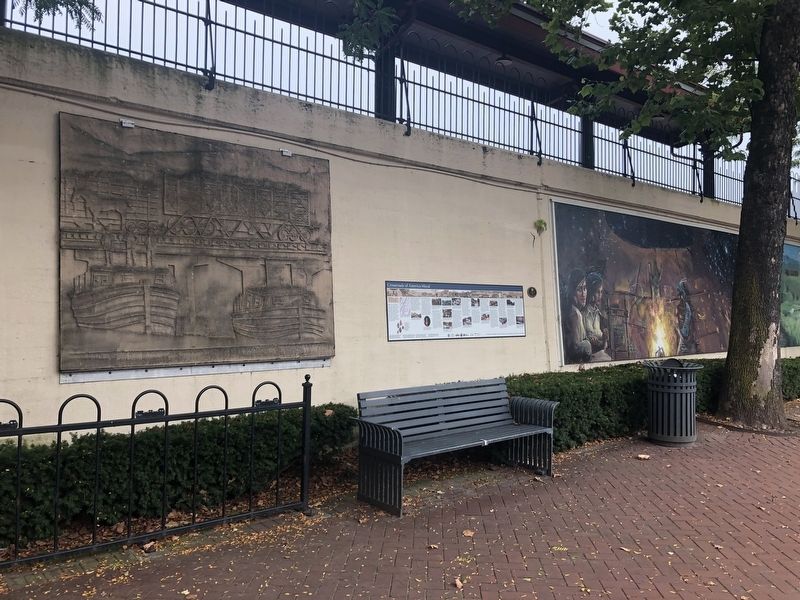 Fort Cumberland was built in 1754 on the hill just across Will's Creek from where you are standing. In 1755 British General Edward Braddock (1695-1755) left Fort Cumberland with young Colonel George Washington to lead an expedition to push the French out of Fort Duquesne, located in what is now Pittsburgh, Pennsylvania. Braddock was killed and command of the troops fell to Washington. It can be said that George Washington's military career started here. President and Commander-in Chief Washington visited Cumberland again in 1794 to suppress the Whiskey Rebellion.

Among the first European settlers in Allegany County were Thomas Cresap (c. 1702-c. 1790) and his wife Hannah Johnson (1705-1744). They established a trading post at Oldtown, along Warrior Run, an east-west trail frequented by American Indians for trading and raiding. The Cresaps befriended Nemacolin (c. 1715-c.1767), a chief of the Delaware Nation. Cresap and Nemacolin blazed a trail linking Will's Creek to the Monongahela River, a tributary of the Ohio River. Braddock later improved this trail to take supply wagons westward on his ill-fated mission; it became known as Braddock's Road.

While local Georges Creek coal was known to exist in the 18th century, it was not until the 19th century that rich veins were exploited by mining companies. Coal soon became Allegany County's most important product; the Cumberland area supplied the state's industry and the needs of steamships and the US Navy through Baltimore. Coal also created jobs, which spurred immigration of Irish, German, Scottish and Welsh miners, and led to the early development of railroads including the Cumberland and Pennsylvania Railroad, the Georges Creek Railroad and the Western Maryland Railway.

The Cumberland Road was authorized by President Thomas Jefferson in 1806 as an improvement on the Braddock Road as well as an extension westward from Uniontown, Pennsylvania, to Wheeling, West Virginia, on the Ohio River. This was the first federally funded major highway project. The road was used by thousands of travelers as the beginning of their journey to the west in the early to mid-1800s. The National Road toll house located in La Vale, Maryland, was built in 1835 when Congress turned the responsibility of maintaining the National Road back to the states.

The Chesapeake & Ohio Canal was conceived as a way to connect the Atlantic seaboard with the Ohio River to facilitate east-west trade and migration. Construction on the 184.5-mile canal, which connects Georgetown in Washington, DC, to Cumberland, began in 1828 and reached Cumberland in 1850. The canal boats were pulled by mules that walked along a towpath next to the canal, which is now a popular bike trail that begins here and goes all the way to Washington, DC.

The Baltimore & Ohio Railroad Company, or B&O , was formed in 1827 as an alternative to the C&O Canal. Construction on the railroad began in Baltimore in 1828; it reached Cumberland in 1842. The 379-mile B&O became the first railroad to reach the Ohio River from the coast. While the cost of shipping by canal or rail were comparable at first, improvements in steam engines eventually reduced the time and cost of shipping by rail and helped signal the end of the canal era.

Another kind of railroad was operating in Allegany County in the mid-19th century—the Underground Railroad. The Canal Company hired enslaved workers from Virginia to complement the Irish and German work crews. Many canal workers lived in Shantytown, just south of Canal Place. Runaway slaves could follow the canal to Shantytown and wait for a signal from the Emmanuel Episcopal Church, which was built where Fort Cumberland once stood. In a maze of tunnels under the church, the runaways found rest and food, as well as instructions for traveling the few remaining miles to the Mason-Dixon Line and freedom.

Its intersection of rivers, canals, roads and railroads turned Cumberland into a major transportation hub and manufacturing center and, by the mid-19th century, the second largest manufacturing center in the state. Local industries included breweries, glass manufacturing, textiles, tires, and iron and steel production. At its peak, the Queen City Brewery produced more than 250,000 barrels of beer and ale annually. Abundant local coal and silica allowed 25 glass companies to flourish here between 1884 and 1992. In 1921, the Kelly-Springfield Tire Company established a plant that covered 81 acres in Cumberland and employed more than 2,000 people.

Cumberland's manufacturing prosperity led it to become Maryland's second-largest city and earned it the nickname "Queen City." Local businesses invested in beautifully designed buildings lining Baltimore Street, downtown's main thoroughfare. The Queen City Hotel, built in 1871 by the B&O Railroad had 174 rooms, a 400-seat dining room and formal gardens with wandering peacocks. Wealthy citizens sponsored the construction of numerous steepled churches and the B'er Chayim synagogue, among the oldest in the United States. They also built themselves elaborate homes on Washington Street.

Allegany County has held onto its roots as a crossroads. From Canal Place in Cumberland, hikers and bikers can travel east along the C&O Canal Towpath to Washington, DC, or west on the Great Allegheny Passage to Pittsburgh, Pennsylvania. The originating point of the National Road is just across Will's Creek from this mural. US Route 40 largely follows the route of the old National Road west from Cumberland. Visitors can still ride the rails either on the Western Maryland Scenic Railway here at Canal Place or from the Amtrak station, located where the Queen City Station Hotel once stood.

(captions)
The rivers near what is now Cumberland, Maryland cut through the hills, creating natural pathways that made it easier for people to move east-west through the mountains, which run north-south.

This region was a crossroads for Native American travelers long before European colonists arrived. Arrowheads, tools and even markings indicating where huts once stood exist at prehistoric sites in this area. At the Barton Site on the Potomac River, archaeologists found two Susquehannock camps that redate European settlers.
Photo by John Bone, courtesy Allegany Museum.

A hill at the confluence of Will's creek and the Potomac River created an ideal setting for Fort Cumberland, which was the British Empire's westernmost outpost when it was built.

This 1772 portrait of George Washington shows him in the uniform of a Colonel of the Virginia Regiment, 18 years after he visited Fort Cumberland as a staff volunteer for General Braddock. Washington's first military command was here in Cumberland.

Although the defeat of General Braddock, shown here wounded in a carriage, was a disastrous beginning to the French and Indian War for the British, the road he carved through the wilderness played an important role in providing European settlers access to the West.
Print based on a painting by Alonzo Chappel

One of the principal modes for east-west transportation of goods in the 1800s was the Conestoga Wagon, which is easily identified by it projecting concave canvas top.
Painting by Newhold Hough Trotter (1827-1898), courtesy State Museum of Pennsylvania.

The need to get coal from Allegany County to industrial centers, such as Scranton and Pittsburgh, spurred the creation of local locomotive, rail and railroad car building businesses like the Cumberland and Pennsylvania Railroad shop at Mt. Savage, shown above.

A heavy demand for Allegany County coal also came from Baltimore, where steamships, like the one photographed in 1849, were loaded with fuel.
Locomotives and steamship photos courtesy Mount Savage Historical Society and the Maryland Historical Society.

Coal from mines in the Georges Creek region, such as the Koontz Mine, shown here, was famous for its clean-burning low-sulfur content, which made it ideal for powering steamboats, locomotives, mills and machine shops. By 1907, Western Maryland was producing 6 million tons of coal per year and shipping it around the world.

The La Vale Toll Gate House, built in 1835 just a few miles up the National Road from Cumberland, was the first toll collecting station travelers had to pass on their way West. It is one of only three remaining toll gate houses along the National Road.

Canal boats leaving the wharfs at Cumberland would pass 74 locks, 7 dams, 11 aqueducts and 3,118-foot-long tunnel on their way to Georgetown in Washington, D.C.

The Western Maryland Railway station (building to your left), built in 1913 at what is now Canal Place, served as a control tower for the railroad until 1973. Now fully restored, the Station is home to the Western Maryland Scenic Railroad, a Visitors Center, and the C&O Canal National Historical Park Interpretive Center.

The prominent steeple of Emmanuel Episcopal Church is a Cumberland landmark, and marks the spot where Fort Cumberland once overlooked the confluence of Will's Creek (foreground) and the North Branch of the Potomac River.

Built in the first decade of the 20th century, the Footer Dyeworks was an expansive steam cleaning and dyeing facility that employed 500 people and several hundreds of local and regional clients, including the White House. One of its original buildings is now restored and is located immediately to the south of the I-68 overpass at Canal Place.

The B&O Railroad constructed the 174-room Queen City Station Hotel in 1871 to serve both as a destination hotel and train station. It had formal gardens with a fountain and peacocks, a ballroom and a 400-seat dining room.

The C&O Towpath and the Great Allegany Passage Trails begin and end in front of the Western Maryland Railway Station at Canal Place. The trails make it possible to travel 330 traffic free miles from Washington, DC to Pittsburgh, Pennsylvania, along canals, rivers and railways, and through historic towns and beautiful landscapes.
Photograph courtesy of Dave Romero/Vibrant Image

Topics and series. This historical marker is listed in these topic lists: Abolition & Underground RR • African Americans • Churches & Religion • Native Americans. In addition, it is included in the Baltimore and Ohio Railroad (B&O) 🚂, the Braddock’s Road and Maj. Gen. Edward Braddock, the Chesapeake and Ohio (C&O) Canal, the The Historic National Road, and the Whiskey Rebellion series lists.

Location. 39° 38.998′ N, 78° 45.817′ W. Marker is in Cumberland, Maryland, in Allegany County. Marker is on Canal Street 0.1 miles north of West Harrison Street, on the left when traveling north. Touch for map. Marker is at or near this postal address: 13 Canal Street, Cumberland MD 21502, United States of America. Touch for directions.