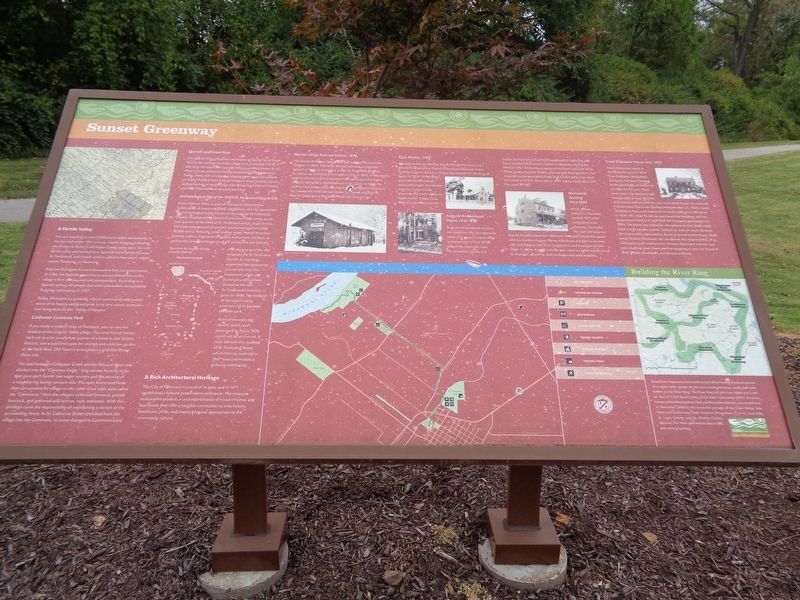 You are standing in one of Missouri's oldest settlements. In the last half of the 18th century, French trappers following the Riviere le Biche (Cold Water Creek) came upon this rich, fertile valley and settled here. Spanish rulers called this area St. Ferdinand, and French settlers called it Fleurissant, which means flowering, or blooming.

Francois Dunegant formed Florissant's first civil government. In 1786, the Spanish government commissioned him as the village's first military and civil commandant. According to a Spanish census, 40 people and seven plantations occupied the fledgling community in 1787.

Today, Florissant is a growing, vibrant community with a clear sense of its history and great pride in its core values, essence and recognition as the "Valley of Flowers."

If you study a modern map of Florissant, you can see the shadow of the original 1800s village. The small French homes each sat on a lot usually one quarter of a block in size. Within that lot, one would find a pen for animals and a kitchen garden at the back 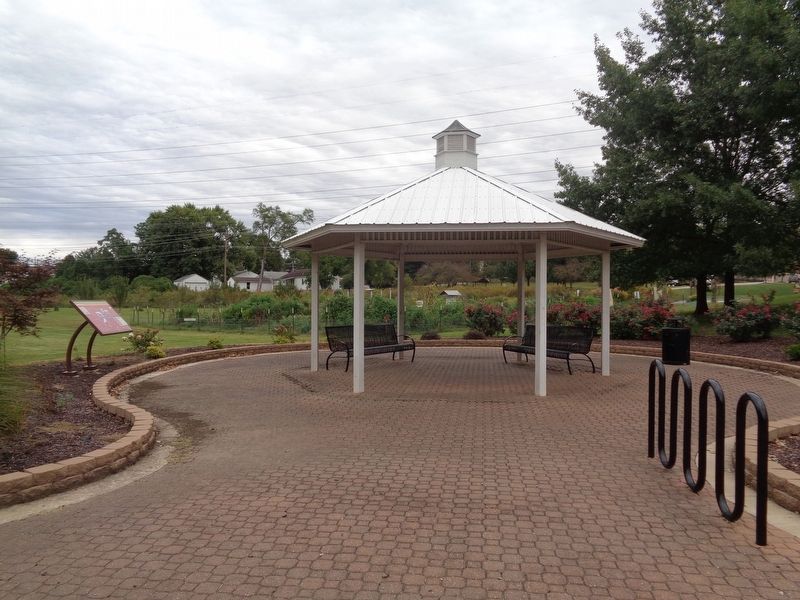 By Jason Voigt, October 6, 2019
2. Sunset Greenway Marker
Located off of the Sunset Greenway Trail and St. Francois Street.
door. Old Town is arranged on a grid that shows these lots.

The land between Coldwater Creek and the Missouri River was divided into the "Common Fields," long narrow farming strips that gave each farmer two water sources and the security of a neighboring farmer on each side. The open forest and fields that surrounded the village on the other three sides were called the "Commons." Here the villagers collected firewood, grazed livestock, and gathered wild berries, nuts, and seeds. With this privilege came the responsibility of maintaining a section of the surrounding fence. As St. Catherine Street stretched from the village into the Commons, its name changed to Commons Lane.

The Spanish King gifted the area known as Spanish Land Grant Park to the inhabitants of the village to St. Ferdinand. The land was once the site of the Spanish Military grounds known as the Place d'Arms, where the militia conducted drilling exercises. Today, along with serving as a relaxing green space for visitors to enjoy, the park hosts annual historical reenactments, picnics, and gatherings in conjunction with the spring Valley of Flowers and Old Town Fall Festival celebrations.

From 2004 to 2006, as part of Florissant's Bicentennial Celebration of Lewis and Clark's Expedition, the city sponsored an archaeological dig at the site of the original St. Ferdinand Church. Located within Spanish Land Grant Park, in the southeast quarter of the block at St. Ferdinand and St. Louis Streets, the three-year excavation project uncovered approximately 10,000 items, including coins, bullets, pipes, Native American jewelry, coffins, fragments of bottles and ceramic artifacts, as well as the complete footprint of the presbytery (see below).

The site was once the old cemetery for St. Ferdinand church. As was long expected, the excavation proved that only the headstones of the old burial ground had been moved to the new St. Ferdinand Cemetery prior to 1900. The remains of Florissant's early pioneers still lie beneath the little park.

Most of the early log church, which was destroyed by fire in 1836, could not be uncovered. It rests beneath the roadbed of St. Ferdinand Street, which the city widened in 1967 to accommodate a growing community.

The City of Florissant is proud of its past, and in 1971 established a historic preservation ordinance. The measure ensures the protection and maintenance of historic homes and businesses that offer a tangible connection to area history, boost civic pride, and inspire progress appropriate to the community culture.

The Westend Narrow Gauge Railroad reached Florissant on October 1, 1878. This little railroad station was originally located at the end of the line, at Rue St. Ferdinand and Rue St. Catherine. Converted to an electric line in 1892, trolley mail was introduced and mail posted in the morning in Florissant could be delivered in the afternoon in St. Louis. In 1969, the architectural preservation society known as Historic Florissant, Inc. moved the little railroad station to a small city park on Rue St. Catherine at Florissant Road and restored it.

Located at Rue St. Denis at Rue St. Pierre, this home is a wonderful example of French Colonial architecture. It was built for Eugenio Alvarez, military storekeeper for the King of Spain. In 1914, Dr. Herman von Schrenk, a botanist, plant pathologist, and timber engineer, acquired the property and made additions to the home. Today, Casa Alvarez is privately owned.

Auguste Archambault lived an extraordinary life, courageously advancing western exploration and expansion as one of the last of the mountain men. He served as a guide and hunter for Fremont in his Third Expedition to California Battalion during the Mexican War. Archambault came to Florissant with one of his fellow guides, Antoine Tesson, and married Amanda Piera. He acquired numerous tracts of land and is believed to have built the house at 603 St. Denis about 1850. Archambault died in Florissant in 1881.

Henry Albers arrived in Florissant around 1875 after emigrating from Hanover, Germany. He built the store on Rue St. Francois between 1884 and 1886 and shared the space with his brother August. Henry sold shoes and fabrics on one side, and August sold farm implements and hardware on the other. In 1904, August built his own store on Jefferson Street at St. Francois, where he sold hardware and auto supplies.

Franz Gittemeier came to the Florissant area in 1870 from Rebbeke, Westphalia Germany, but soon headed to the gold fields of California to make his fortune. After seven years, he returned with enough gold to buy 50 acres of farmland and to build this two-story brick home. He married Prussian-born Gertrude Gerling on September 25, 1858, raised 10 children here, and increased his land holdings to 500 acres. In 1938, Mrs. Mae Pondrom purchased the building, and her descendants lived in it until Shell Oil Company purchased it in 1990. The home was slated for demolition so that Shell could build a large service station, food shop, and car wash. Because the community expressed its desire to preserve the house, Shell asked Historic Florissant, Inc. to assume the responsibility of its restoration and maintenance. Historic Florissant met the one-year deadline given them and the property is now of their offices, bookstore and Resource Room.

Great Rivers Greenway is the public organization leading the development of a region-wide system of interconnected greenways, parks and trails, known as the River Ring. The River Ring will join two states and cover an area of 1,216 square miles. Great Rivers Greenway (GRG), formerly known as the Metropolitan Park and Restoration District, was established in November 2000 by the successful passage of the Clean Water, Safe Parks and Community Trails Initiative (Proposition C) in St. Louis City, St. Louis County and St. Charles County, Missouri. For more information about GRG, visit www.grgstl.org.

Location. 38° 47.813′ N, 90° 19.979′ W. Marker is in Florissant, Missouri, in St. Louis County. Marker can be reached from Rue St. Francois 0.1 miles west of North St. Charles Street, on the right when traveling west. Marker is located off the Sunset Greenway Trail. It is accessible from the St. Francois and St. Charles Streets. It is behind the Girardier House, in a small rest area with a shelter. Touch for map. Marker is at or near this postal address: 601 North St Charles Street, Florissant MO 63031, United States of America. Touch for directions.

Also see . . .  Sunset Greenway. From the Great Rivers Greenway website, there is some information about the trail that goes through north St. Louis County. A map of the trail is on the website, as well as recommended eateries and historical places to visit. (Submitted on October 8, 2019, by Jason Voigt of Glen Carbon, Illinois.)