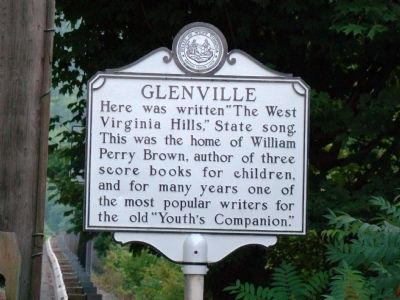 By J. J. Prats, July 14, 2008
1. Glenville Marker
Inscription.
Glenville. . Here was written “The West Virginia Hills,” State song. This was the home of William Perry Brown, author of three score books for children, and for many years one of the most popular writer for the old “Youth’s Companion.” . This historical marker is in Glenville in Gilmer County West Virginia

Here was written “The West Virginia Hills,” State song. This was the home of William Perry Brown, author of three score books for children, and for many years one of the most popular writer for the old “Youth’s Companion.”

Topics and series. This historical marker is listed in this topic list: Arts, Letters, Music. In addition, it is included in the West Virginia Archives and History series list. 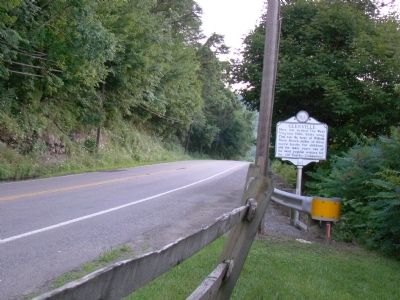 Click or scan to see
this page online
(approx. 2½ miles away); Stagecoach Stop (approx. 7 miles away); Braxton County/Gilmore County (approx. 8.1 miles away). Touch for a list and map of all markers in Glenville.

Regarding Glenville. Glenville State College, founded in 1872, is located here. “The West Virginia Hills” was adopted as the state song in 1961.

Also see . . .
1. The West Virginia Hills. Words by Ellen Rudell King, Music by Howard Everett Engle. This page shows lyrics, has a MIDI file with the music. “Oh, the West Virginia hills! How majestic and how grand, / With their summits bathed in glory, like our Prince Immanuel’s Land! / Is it any wonder then, that my heart with rapture thrills, / As I stand once more with loved ones on those West Virginia hills? ” (Submitted on December 6, 2008.)

2. Adoption of the State Song. “On September 25, 1885 a poem appeared in the Glenville Cresent. The poem was attributed to Ellen Rudell King. It seems a little silly today, but there is some question about who really wrote the poem. Some say that it was actually written by Mrs. King. Others suggest that her husband, the Reverend David H. King, wrote the poem for his wife Ellen. Still others suggest that Mrs. King wrote the song and Mr. King polished it up.” (Submitted on December 6, 2008.)

3. Brown, William Perry. from the Northern Illinois University Libraries Beadle and Adams Dime Novel Digitization Project. “He wrote short stories and poems for various weeklies and magazines, including the Springfield Republican, Ainslee’s Magazine, Golden Days, the Youth's Companion, Woman’s World, Chicago Ledger, Banner Weekly, Housewife, People’s Home Journal, Southern Magazine, Brooklyn Magazine, and various outdoor magazines, such as Forest and Stream. He went to Glenville, West Virginia, in 1888, and was there married, September 3, 1890, to Emma E. Hays. From 1890 to 1892 he was associated with Sam Walter Foss as editor of the Yankee Blade (Boston). After 1892, he resumed his free-lance writing until shortly before his death. He died in Glenville, September 4, 1923...” (Submitted on December 6, 2008.)
Credits. This page was last revised on June 16, 2016. It was originally submitted on December 6, 2008, by J. J. Prats of Powell, Ohio. This page has been viewed 1,316 times since then and 12 times this year. Photos:   1, 2. submitted on December 6, 2008, by J. J. Prats of Powell, Ohio.

Editor’s want-list for this marker. Photos of the town of Glenville • Portraits of Mrs. King and Mr. Brown • Vintage and current photos of the houses they lived in, if still standing • Can you help?
Share This Page.