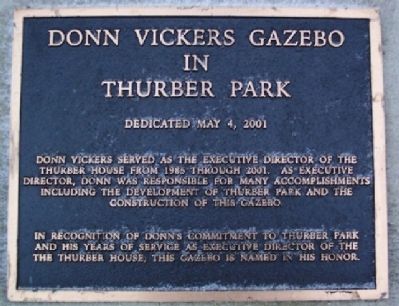 Donn Vickers served as the executive director of the Thurber House from 1985 through 2001. As executive director, Donn was responsible for many accomplishments including the development of Thurber Park and the construction of this gazebo.

In recognition of Donn's commitment to Thurber Park and his years of service as executive director of the the [sic] Thurber House, this gazebo is named in his honor.
Dedicated May 4, 2001

Topics. This historical marker is listed in these topic lists: Arts, Letters, Music • Charity & Public Work • Man-Made Features • Notable Places. A significant historical date for this entry is May 4, 1920.

Other nearby markers. At least 8 other markers are within walking distance of this marker. James Thurber (about 300 feet away, measured in a direct line); St. Paul African Methodist Episcopal Church 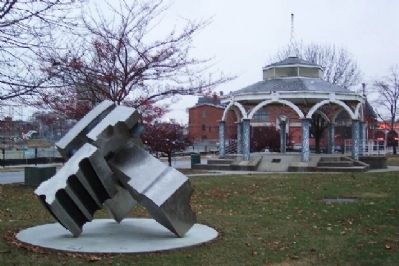