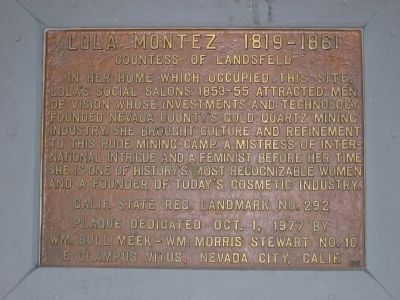 Photographed By Syd Whittle, December 29, 2006
1. Lola Montez 1819 - 1861 Marker
Inscription.
Lola Montez 1819 - 1861. Countess of Landsfeld. , In her home which occupied this site, Lola’s Social Salon 1853 – 55 attracted men of vision whose investments and technology founded Nevada County’s gold quartz mining industry. She brought culture and refinement to this rude mining camp. A mistress of international intrigue and a feminist before her time she is one of history’s most recognizable women and a founder of today’s cosmetic industry. . This historical marker was erected in 1977 by Wm. Meek-Wm. Morris Stewart No. 10 E Clampus Vitus, Nevada City, Ca.. It is in Grass Valley in Nevada County California

In her home which occupied this site, Lola’s Social Salon 1853 – 55 attracted men of vision whose investments and technology founded Nevada County’s gold quartz mining industry. She brought culture and refinement to this rude mining camp. A mistress of international intrigue and a feminist before her time she is one of history’s most recognizable women and a founder of today’s cosmetic industry.

Topics and series. This historical marker is listed in these topic lists: Industry & Commerce • Notable Buildings • Settlements & Settlers • Women. In addition, it is included in the California Historical Landmarks, and the E Clampus Vitus series lists. A significant historical year for this entry is 1853. 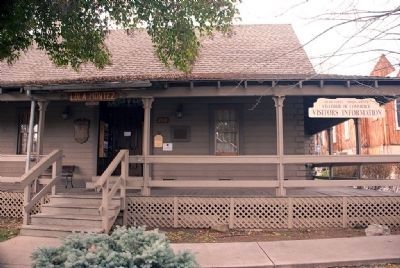 The only remaining part of her home is the front door of the Chamber of Commerce Building.

Regarding Lola Montez 1819 - 1861. The California Registered Landmark Web Site Information states: Lola was born in Limerick, Ireland on July 3, 1818, as María Dolores Eliza Rosanna Gilbert. After living in England and on the continent, Lola came to New York in 1851 and settled in Grass Valley in 1852. It was here she built the only home she ever owned and became friends with Lotta Crabtree, who lived up the street. Lola died January 17, 1861 and was buried in Greenwood Cemetery, New York. 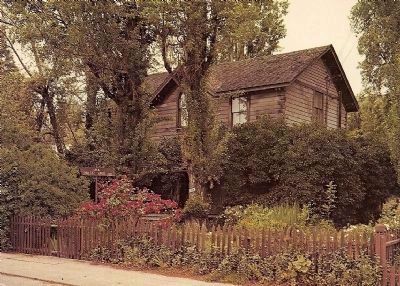 Photographed By Eastman's Studio, Susanville, Ca
3. Vintage Postcard of the Lola Montez Home
Description on back of postcard:
Lola Montez home at Grass Valley, Ca. This is one of the few really authentic old homes of the West. Many of the stories about this strange and exotic woman can not be confirmed but it is certain that she did "retire" here after her life leading from royal circles of Europe to the stage of San Francisco. Her influence on life throughout the mining areas of the west can only be told via a series of stories which seem almost fabulous.
1. Lola Montez
Born Eliza Gilbert in Ireland, Lola came to the Mother Lode from Europe, where she lead a high-profile theatrical and scandalous personal life. She had been the center of attention for the most popular literary and artistic personalities of her day. Dubbed the "Countess of Landsfelt" by King Ludwig of Bavaria, Lola considered herself the queen of Bavaria, even though Ludwig's wife held that honor. Ms. Montez was instrumental in the King's downfall, including his de-throning and new title, "Mad King of Bavaria".
Lola toured the United States, visited San Francisco, and settled in Grass Valley. Grass Valley? Yes, to be closer to her gold mine (she had $9,000 worth of stock in the Eureka Gold Mine) and to get the attention she craved but wasn't getting in the bigger cities (surely the miners would appreciate her). She quickly became the center of the social whirl there, giving big parties and keeping a monkey and grizzly bear as pets. She took an interest in her young neighbor, Lotta Crabtree, and helped the child develop her entertainment talents.
Her life took a turn for the worst when she left Grass Valley to tour Australia and the United States, both of which were flops. In the final part of her life, she turned to religion, asking for forgiveness for her sordid past and counseling "wayward" women. Her health failed, and she died penniless at 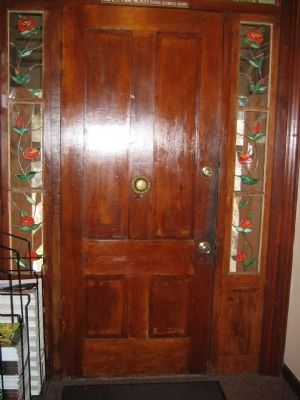 Photographed By Syd Whittle, December 29, 2006
4. The Front Door of the Lola Montez Home
The only remaining part of her home.
43 in New York.
Lola's house still stands at 248 Mill Street in Grass Valley. Down the street at 238 is Lotta Crabtree's house. Both are privately occupied with landmarks in front. 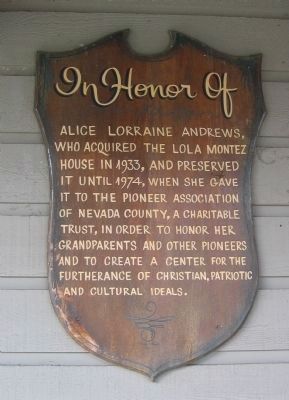 Photographed By Syd Whittle, December 29, 2006
5. Additional Marker Mounted on Front of the Building
In Honor of
Alice Lorraine Andrews, who acquired the Lola Montez House in 1933, and preserved it until 1974, when she gave it to the Pioneer Association of Nevada County, a charitable trust, in oder to honor her grandparents, and other pioneers and to create a center for the furtherance of Christian, patriotic and cultural ideals 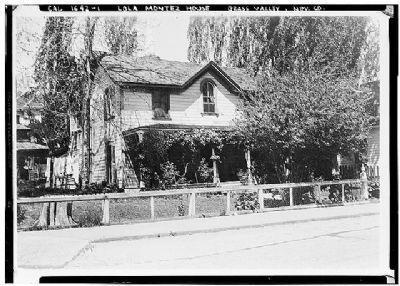