Scion of the Washington Elm 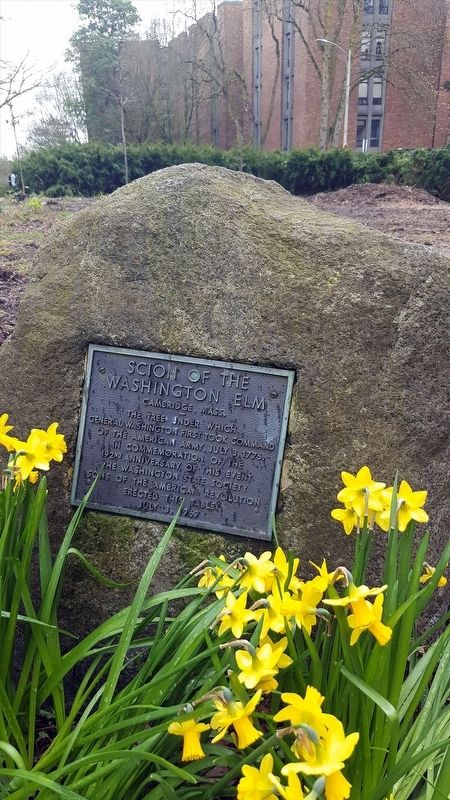 Topics and series. This historical marker is listed in this topic list: Horticulture & Forestry. In addition, it is included in the Former U.S. Presidents: #01 George Washington, and the Historic Trees series lists. A significant historical date for this entry is July 3, 1775.

Location. 47° 39.44′ N, 122° 18.298′ W. Marker is in Seattle, Washington, in King County. Marker is on E Stevens Way NE, on the right when traveling south. Located on the University of Washington campus between Communications and Clark Hall. Touch for map. Marker is in this post office area: Seattle WA 98105, United States of America. Touch for directions.

Other nearby markers. At least 8 other markers are within 2 miles of this marker, measured as the crow flies. Medal of Honor Memorial (approx. ¼ mile away); George Washington (approx. 0.3 miles away); Naval Training Station Seattle (approx. half a mile away); The Old Shell House 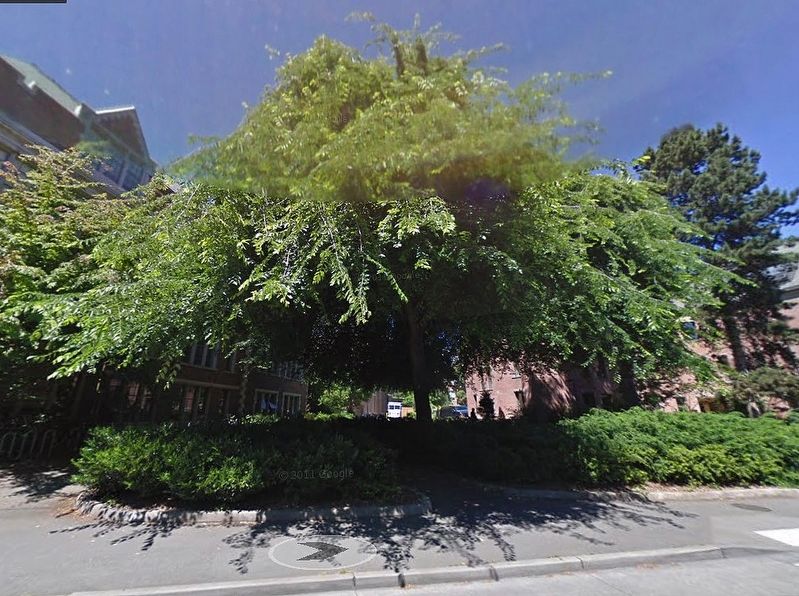 Photographed By Google Maps
2. Scion of the Washington Elm when still alive

Regarding Scion of the Washington Elm. Washelli Memorial Park website: The George Washington Elm was taken down in late 2016 due to its trunk splitting into two and creating a hazard for passersby walking under the tree.

The Evergreen Washelli Memorial Park website provides an excellent background on the George Washington Elm on the UW campus: The elm at the University of Washington was an authentic descendant from the famous Washington Elm in Cambridge, Massachusetts, under which it is popularly believed that George Washington stood to accept command of the Continental Army in the American Revolutionary War. The tree, an American White Elm, became a celebrated attraction, with its own plaque, a fence constructed around it and a road moved in order to help preserve it.

In 1896, a young man by the name of Arthur John Collins graduated from the UW, and immediately entered Harvard University, 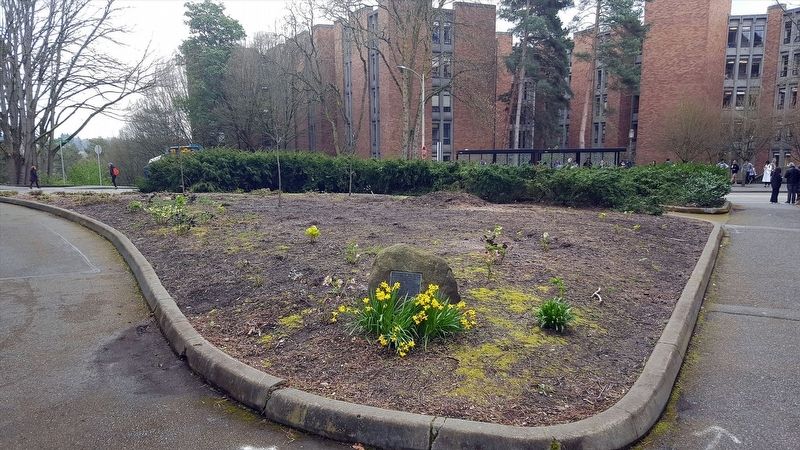 Photographed By Douglass Halvorsen, March 30, 2017
3. Scion of the Washington Elm Marker
at Cambridge, as a graduate student in history and political science. There, he passed the Washington Elm every day, and was fascinated by this link with the past. Collins believed that his home state—which had been named for the first President—should have at its university a descendant of the tree so intimately linked with the spirit of American liberty.

A persistent and imaginative fellow, he eventually procured a scion of the noble tree for the campus of his alma mater in the Pacific Northwest. He wrote to Professor Edmund J. Meany in 1902, “I have succeeded in my fifth attempt and now have a true scion of the Washington Elm, which I am sending you this morning by express. I sincerely hope that this tree will reach you safely and will grow for the next 200 years within the sacred precincts of the University of Washington.” Meany, a history professor and “grand old man,” planted the scion near Lewis Hall, and it flourished. The students at the UW affectionately nicknamed this tree “George.”

When the original Washington Elm fell over on October 26, 1923, and the tree was divided into 1,000 pieces and distributed among each of the states and their legislatures. In 1930, Ludwig Metzgar, who was in charge of the university greenhouses, proposed that Seattle show its gratitude by sending a scion back to Cambridge, as a returning grandson of the famous tree. After two years, he was successful in procuring a sprouting of roots from the limb, and a scion was given to Cambridge and planted in Harvard Yard. Another scion was sent to the Daughters of the American Revolution, and it was planted on the Capitol grounds in Washington, D.C.

The elm which stood on the University of Washington campus was struck by lightning on August 12, 1963. This time, a scion secured from Cambridge was sent back to the UW, and planted between Clark Hall and the Communications building on the Common.

Related marker. Click here for another marker that is related to this marker. Site of the original Washington Elm in Cambridge.

Also see . . .
1. University of Washington Blog. Blog dedicated to updating visitors on the current status of the George Washington scion elm and the hope of taking a cutting from a surviving branch or other living scion to replant on campus. (Submitted on January 18, 2018, by Douglass Halvorsen of Klamath Falls, Oregon.)