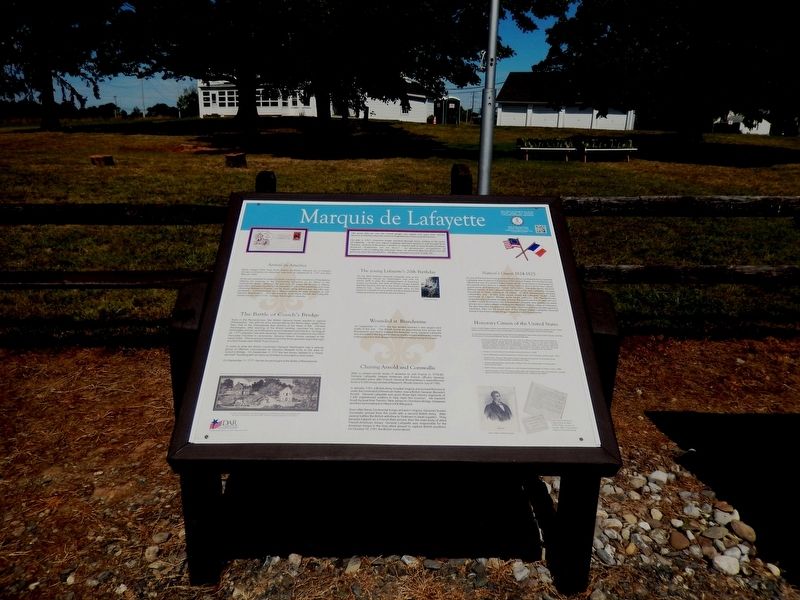 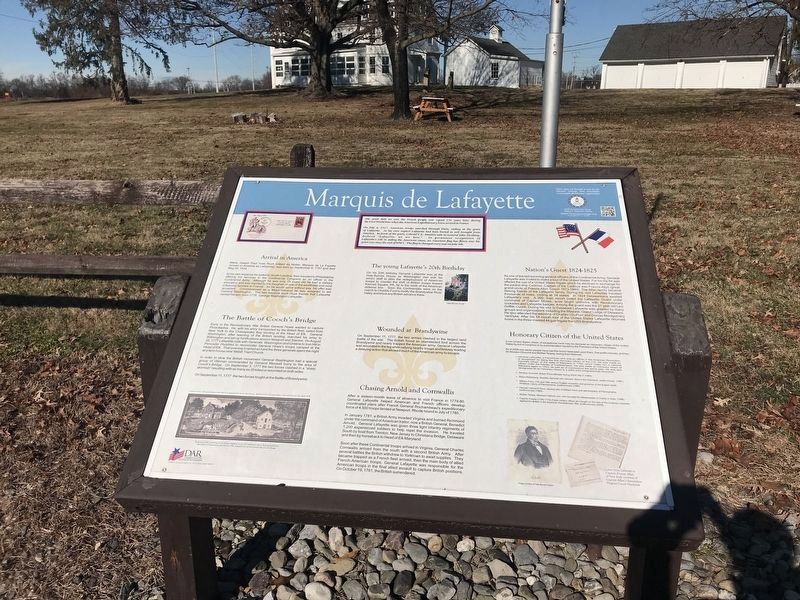 Click or scan to see
this page online
in France. As he would serve without pay, his offer was accepted. Commissioned as a Major General he was assigned to aid General Washington. The two became such close friends that Lafayette named his son, born 1779, George Washington Lafayette.

In order to slow the British movement General Washington had a special group of rifleman commanded by General Maxwell hurry to the area of Cooch’s Bridge. On September 3, 1777 the two forces clashed in a “sharp skirmish” resulting with as many as 20 killed or wounded on both sides. 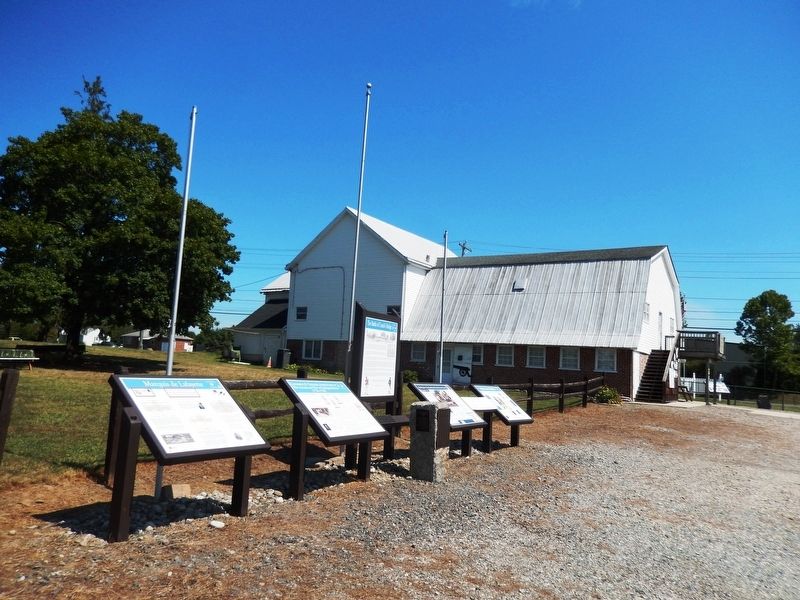 Photographed By Don Morfe, September 8, 2019
3. Marquis de Lafayette Marker
was at the Hale-Byrnes House as Washington met with his senior staff to plan the redeployment of American troops to counter the shift of British troops toward Kennett Square, PA. far to the north of the American defense line. Soon the Continentals were on the march to Chadds Ford to fortify the Brandywine River Valley and block any British advance there.

In January 1781, a British Army invaded Virginia and burned Richmond under the command of American traitor, now a British General, Benedict Arnold. General Lafayette was given three light infantry regiments of 1,200 experience soldiers to help repel the invasion. He traveled South by boat from Trenton, New Jersey to Christiana Bridge, Delaware 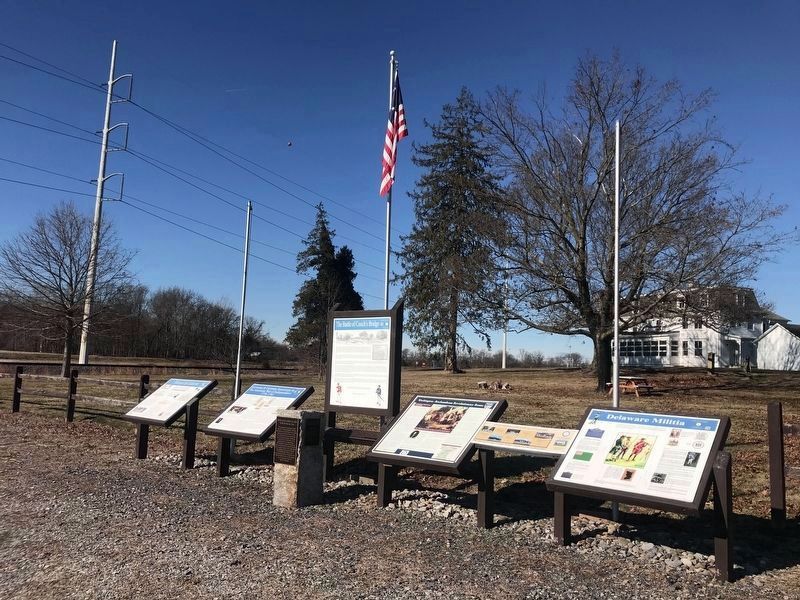 Photographed By Adam Margolis, January 22, 2022
4. Marquis de Lafayette Marker
This marker is the leftmost of the group.
and then by horseback to Head of the Elk, Maryland.

Nation’s Guest 1824-1825
As one of the last surviving general officers of the Continental Army, General Lafayette was invited to make a tour of the United States. For his trip he was offered the use of a United States frigate which the declined in exchange for the packet-ship Cadmus. Captain of the Cadmus was Francis Allyn (great-grand-uncle of Francis Allyn Cooch 1873-1949). The Allyn family became lifelong friends of the Lafayette family. During his visit Lafayette traveled thousands of miles, visiting all 24 states. In 1824 Delawareans awaited Lafayette’s visit. A 200-man escort called the Lafayette Guard under command of Captain Moore, wore bright uniforms with Revolutionary cockades and Lafayette badges. Among the guard was the 21 year old Levi Griffith Cooch. During his visit to Delaware Lafayette was greeted y many groups and organizations 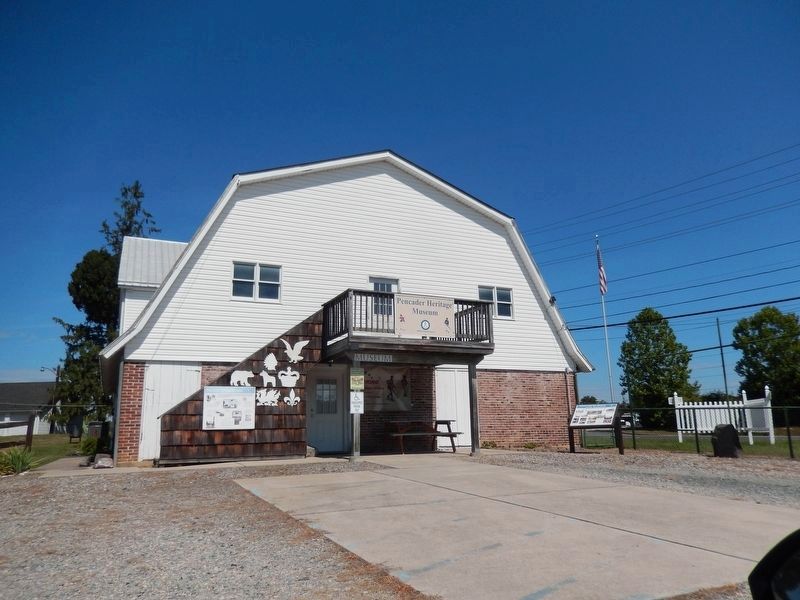 Photographed By Don Morfe, September 8, 2019
5. Pencader Heritage Museum
including the Masonic Grand Lodge of Delaware. He also attended the wedding of Charles I DuPont and Dorcas Montgomery VanDyke. After his 14 month tour of the United States Lafayette returned home in the three-masted 44 gun frigate, the USS Brandywine.

Topics and series. This historical marker is listed in this topic list: War, US Revolutionary. In addition, it is included in the Former U.S. Presidents: #01 George Washington series list.

Location. 39° 38.377′ N, 75° 43.8′ W. Marker is near Newark, Delaware, in New Castle County. Marker is on Sunset Lake Road (Delaware Route 72) south of Old Baltimore Pike, on the right when traveling south. The marker is on the grounds of the Pencader Heritage Museum. Touch for map. Marker is at or near this postal address: 2029 Sunset Lake Road, Newark DE 19702, United States of America. Touch for directions.