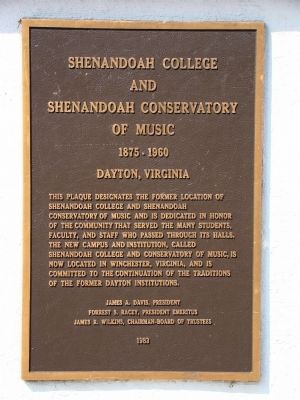 This plaque designates the former location of Shenandoah College and Shenandoah Conservatory of Music and is dedicated in honor of the community that served the many students, faculty, and staff who passed through its halls. The new campus and institution, called Shenandoah College and Conservatory of Music, is now located in Winchester, Virginia, and is committed to the continuation of the traditions of the former Dayton institutions.

Location. 38° 25.056′ N, 78° 56.307′ W. Marker is in Dayton, Virginia, in Rockingham County. Marker is on College Street north of Mill Street, on the left when traveling north. Touch for map. Marker is in this post office area: Dayton VA 22821, United States of America. Touch for directions.

Other nearby markers. At least 8 other markers are within walking distance of this marker. Lt. Col. Thomas F. Wildes (about 600 feet away, measured in a direct line); Fort Harrison 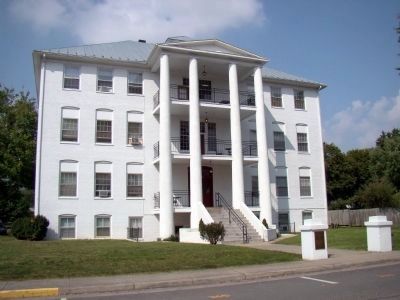 Also see . . .  Shenandoah University History. “Shenandoah University was founded in 1875, in Dayton, Virginia, as Shenandoah Seminary by Dr. Abraham Paul Funkhouser and Professor Jay Newton Fries. The name of the institution and the valley where it was situated derived from the Indian legend of Zynodoa, a brave whose life of strength and courage and his appreciation of beauty resulted in having a river and a valley named for him.” (Submitted on September 23, 2008.)
Credits. This page was last revised on June 16, 2016. It was originally submitted on September 23, 2008, by J. J. Prats of Powell, Ohio. This page has been viewed 1,544 times since then and 58 times this year. Last updated on February 1, 2009, by Linda Walcroft of Woodstock, Virginia. Photos:   1, 2. submitted on September 23, 2008, by J. J. Prats of Powell, Ohio. • Kevin W. was the editor who published this page.
Share this page.