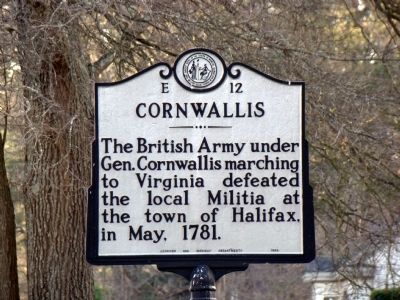 By J. J. Prats, February 14, 2009
1. Cornwallis Marker
Inscription.
Cornwallis. . The British Army under Gen. George Cornwallis marching to Virginia defeated the local Militia at the town of Halifax in May, 1781. . This historical marker was erected in 1968 by Archives and Highway Department. It is in Halifax in Halifax County North Carolina

The British Army under Gen. George Cornwallis marching to Virginia defeated the local Militia at the town of Halifax in May, 1781.

Also see . . .  Halifax and the Revolution. From the State Library of 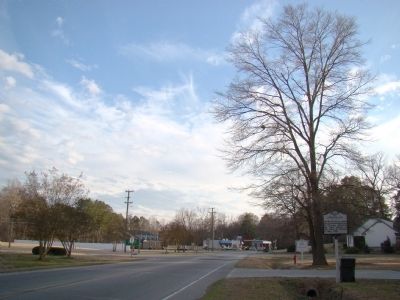 By J. J. Prats, February 14, 2009
2. Cornwallis Marker
North Carolina’s online eNCyclopedia: “By the spring of the next year, only a small number of ragged militia protected the town while, at his headquarters in Wilmington, Lord Cornwallis was making plans to enter Virginia. As the British general began his march northward, supplies and materials were hastily evacuated from Halifax. Colonel Banastre Tarleton led the Tory cavalry unit advancing northward ahead of Cornwallis. Easily beating back two small groups of local militia below Halifax, Tarleton later received word that a large group of militiamen were assembling in the town. The cavalry began a dash, approaching Halifax from the west rather than from the south where the main road lay. Arriving sooner than expected and from an unexpected direction, Tarleton routed the militia and pushed them across the river. The main army reached Halifax several days later. By that time Tarleton's men had committed such outrages against Halifax citizens, that Cornwallis court-martialed and hanged two of his men. In early May, 1781, the British army left Halifax, having damaged little except Public Works, which was soon in operation again. Five months later, at Yorktown, Virginia, Lord Cornwallis surrendered to General Washington.” (Submitted on February 16, 2009.)

Categories. • War, US Revolutionary •
More. Search the internet for Cornwallis.