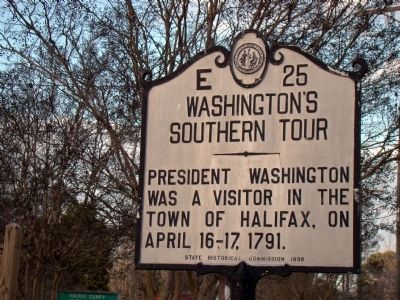 Topics and series. This historical marker is listed in this topic list: Patriots & Patriotism. In addition, it is included in the Former U.S. Presidents: #01 George Washington, the George Washington Slept Here, and the North Carolina Division of Archives and History series lists. A significant historical month for this entry is April 1865. 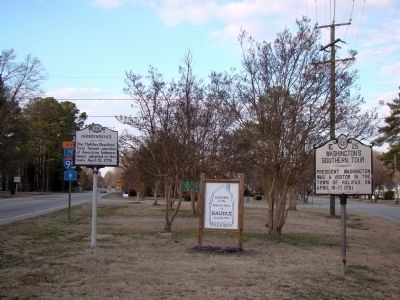 Photographed By J. J. Prats, February 14, 2009
2. Two Markers at Southern Entrance to Halifax
Third marker, "Cornwallis," can be seen at the far left on the 301 bypass. U.S. 301 Business heads to town on the right.

Regarding Washington’s Southern Tour. George Washington toured the southern states in the second year of his first term as President of the United States.

Also see . . .  The Life and Times of George Washington, Volume 2. 1903 book by John Frederick Schroeder and Benson John Lossing. “Leaving Mount Vernon, and passing through Fredericksburg, where he dined with some of his old personal friends, he arrived at Richmond on the 11nth of April (1791). His reception there was enthusiastic. He entered the city amidst the roar of cannon and the acclamations of the crowds of people who lined the streets through which he passed. In the evening there was a grand illumination; and during the two days which he remained there, the city was given up to festivities in honor of the favorite hero of Virginia. Similar tokens of welcome were exhibited at Petersburg, Halifax, Newburn, and Wilmington. On leaving the last-mentioned place he was rowed across Cape Fear river in a splendid barge, by six masters of vessels; 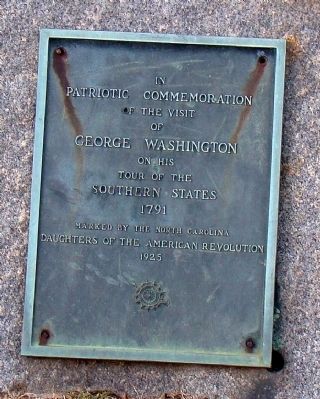 Photographed By J. J. Prats, February 14, 2009
3. DAR Commemorative Tablet
This tablet is nearby, on the other side of the stone with the DAR commemorative tablet for the Halifax Resolves. It reads, "In patriotic commemoration of the visit of George Washington on his Tour of the Southern States, 1791. Marked by the North Carolina Daughters of the American Revolution, 1925."
and on his arrival at Charleston (May 2d) a similar token of honor was accorded to him on a larger scale. From Hadrill's Point, attended by a cortege of distinguished Carolinians, he was conveyed to the city in a twelve-oared barge, manned by thirteen captains of American ships, while other barges and floats, with bands of music and decorations, formed an imposing nautical procession. On landing he was received by Governor Pinckney, the civic authorities, the Cincinnati, and a brilliant military escort, who attended him in procession, amidst the ringing of bells, the firing of cannon, and the acclamations of the people, first to the Exchange, where he was welcomed in a formal address, and then to the house prepared for his reception.” (Submitted on February 16, 2009.) 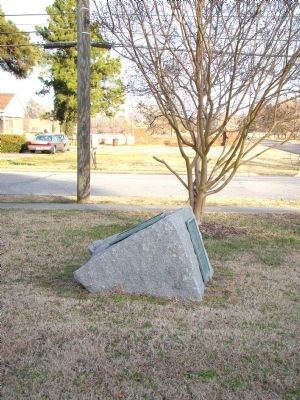