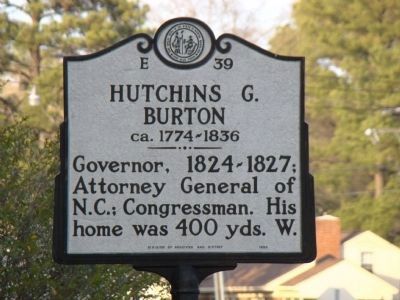 Erected 1998 by Division of Archives and History. (Marker Number E-39.)

Topics and series. This historical marker is listed in this topic list: Government & Politics. In addition, it is included in the North Carolina Division of Archives and History series list. A significant historical year for this entry is 1827. 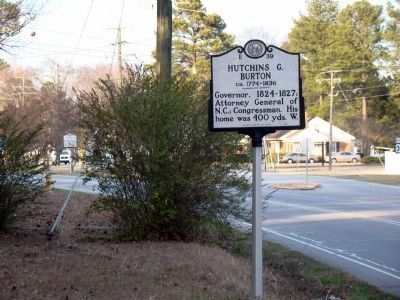 Photographed By J. J. Prats, February 14, 2009
2. Hutchins G. Burton Marker
The nearby marker titled "Independence" can be seen through the bushes on the left.

Regarding Hutchins G. Burton. The twenty-second governor of North Carolina was born in Virginia in 1774. His education was attained at the University of North Carolina. He went on to study law, was admitted to the in 1806, and then established a successful legal career. Burton first entered politics as a member of the North Carolina House of Commons, a position he held from 1809 to 1810 and 1817 to 1819. He also served as the attorney general of North Carolina from 1810 to 1816; and was a member of the U.S. House of Representatives from 1819 to 1824. Burton next won election to the governorship in 1824. He went on to win reelection annually until 1826. During his tenure, internal improvement projects were lobbied for; penal code revisions were recommended; and funding was secured to cover expenses during General Lafayette’s tour of the state. After leaving office, Burton was selected to serve as the territorial governor of Arkansas, however he never won confirmation. Governor Hutchins G. Burton passed away on April 21, 1832, and was buried in the Unity Churchyard, in Beattys Ford, North Carolina. —From the National Governors Association website