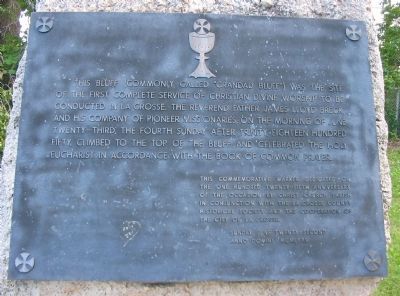 This bluff (commonly called "Grandad Bluff") was the site of the first complete service of Christian Divine Worship to be conducted in La Crosse. The Reverend Father James Lloyd Breck and his company of pioneer missionaries, on the morning of June Twenty-Third, the Fourth Sunday after Trinity, Eighteen Hundred Fifty, climbed to the top of the bluff and celebrated the Holy Eucharist in accordance with the book of common prayer.

This commemorative marker dedicated on the one hundred twenty-fifth anniversary of the occasion by Christ Church Parish in conjunction with the La Crosse County Historical Society and the cooperation of the City of La Crosse. 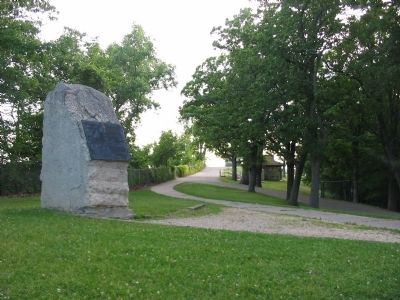 Click or scan to see
this page online
La Crosse County. Marker can be reached from Grandad Bluff Road 0.9 miles west of Bliss Road. Marker is attached to a large stone at the top of Grandad Bluff near the parking lot. Touch for map. Marker is at or near this postal address: 3200 Main Street, La Crosse WI 54601, United States of America. Touch for directions.

Also see . . .
1. The Life of the Reverend James Lloyd Breck. "We spent the Fourth Sunday after Trinity (June 23d) at Prairie La Crosse... We held service, and celebrated the Holy Communion in the morning, on a bluff about two miles back of the landing." (Submitted on March 1, 2009.)

2. Grandad Bluff. "Grandad Bluff was mentioned in Life on the Mississippi by Mark Twain." (Submitted on March 1, 2009.)

3. Grandad Bluff History. "Grandad Park was started with the purchase of the land from the state by Judge George Gale (Galesville's namesake) in July 1851." (Submitted on March 1, 2009.) 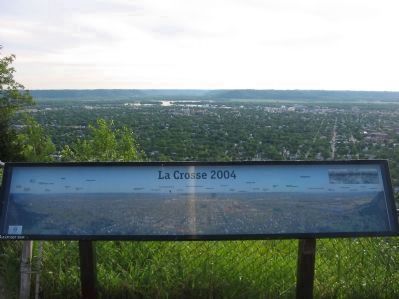