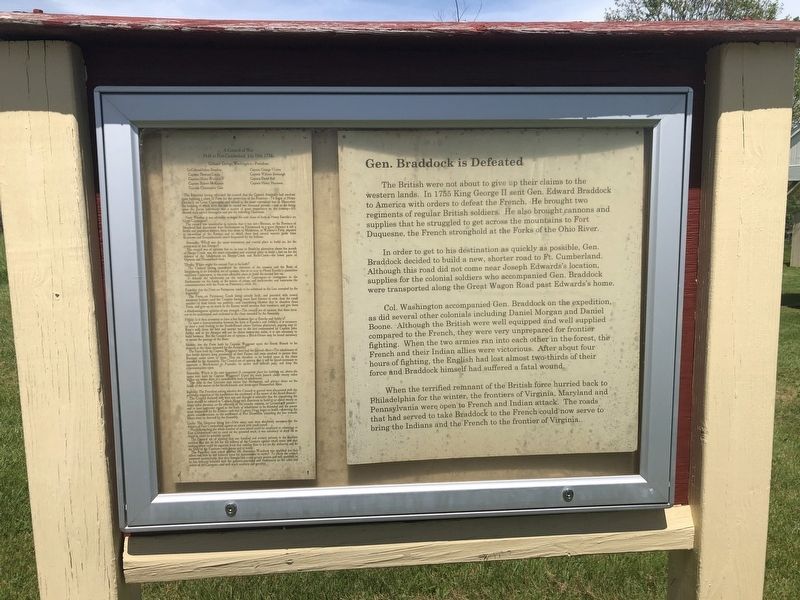 The British were not about to give up their claims to the western lands. In 1755 King George II sent Gen. Edward Braddock to America with orders to defeat the French. He brought two regiments of regular British soldiers. He also brought cannons and supplies that he struggled to get across the mountains to Fort Duquesne, the French stronghold at the Forks of the Ohio River.

In order to get to his destination as quickly as possible. Gen. Braddock decided to build a new, shorter road to Ft. Cumberland. Although this road did not come near Joseph Edwards's location, supplies for the colonial soldiers who accompanied Gen. Braddock were transported along the Great Wagon Road past Edwards's home.

Col. Washington accompanied Gen. Braddock on the expedition as did several other colonials including Daniel Morgan and Daniel Boone. Although the British were well equipped and well supplied compared to the French, they were very unprepared for frontier fighting. When the two armies ran into each other in the forest, the French and their Indian allies were victorious. After about four hours of fighting, the English had lost almost 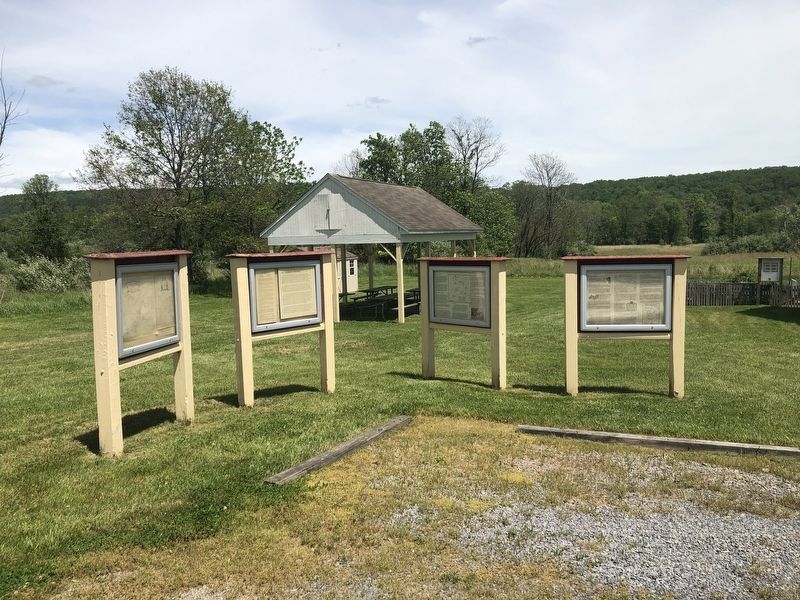 By Devry Becker Jones, May 28, 2020
2. Gen. Braddock is Defeated Marker
two-thirds of their force and Braddock himself had suffered a fatal wound.

When the terrified remnant of the British force hurried back to Philadelphia for the winter, the frontiers of Virginia, Maryland and Pennsylvania were open to French and Indian attack. The roads that had served to take Braddock to the French could now serve to bring the Indians and the French to the frontier of Virginia.

The President having informed the council that the General Assembly had resolved upon building a chain of Forts for the protection of the Frontiers—To begin at Henry Enocks's, on Great Capecapon, and extend in the most convenient line to May-river the building of which forts was not to exceed two thousand pounds—and as the fixing upon the places judiciously was a matter of great importance to the country—He desired their advice thereupon; and put the following Questions

First: Whether it was advisable to 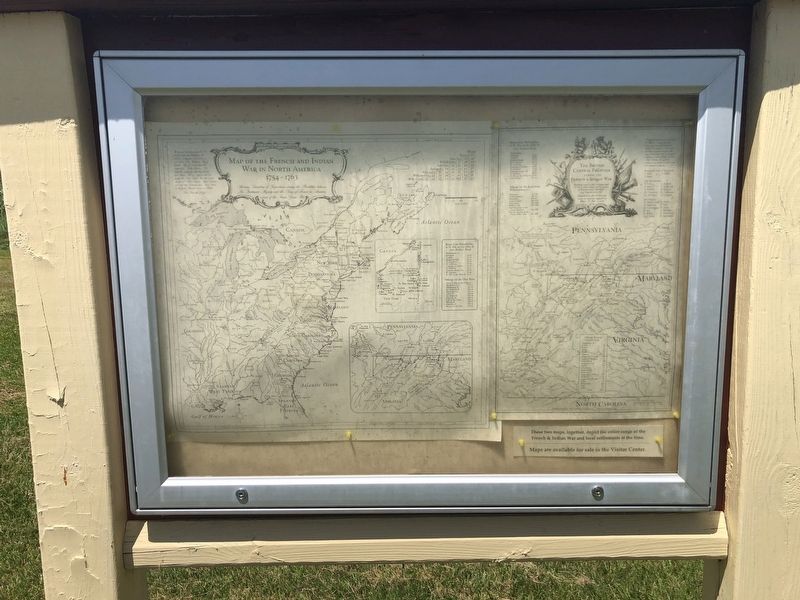 By Devry Becker Jones, May 28, 2020
3. A nearby with maps showing details of the French and Indian War
begin the said chain of forts at Henry Enocks's on Great Cacapon?

The Council was unanimous in opinion that it was not—Because, as the Province of Maryland had abandoned their Settlements on Potowmack to a great distance it left a fertile and populous district, from that down to Maidstone, at Watkins' Ferry, exposed to incursions of the Enemy; and to which there lead several warrior paths from Raystown and Susquehannah, much frequented by the Indians.

Secondly: Which was the most convenient and central place to build on, for the protection of that District?

The council was of opinion that at, or near Bendicks plantation above the mouth of Sleepy Creek, was the most convenient and central place to build a fort on for the defence of the Inhabitants on Sleepy-Creek and Back-Creek—the lower parts of Opecon and Shanandoah river.

Thirdly: Where ought the second Fort to be built?

The Council having considered the situation of the country and the Body of Inhabitants to be defended are of opinion, that at or near to Henry Enocks's plantation or Great Cacapon, is the most advisable place to build the second fort on.

It defends the inhabitants on the waters of Capecapon—is contiguous to the Settlements on the heads of the waters of sleepy and back-creeks: and maintains the communication with the Forts on Patterson's creek, &c.

Fourthly: Are the Forts on Pattersons creek to be esteemed in the Line intended by the Assembly?

The Forts on Patterson's Creek being already built, and provided with several necessary houses—and the Country having more hard Service in view, than the small number of their forces can perform—and considering likewise that to abandon those Forts, and give up so much to the Enemy would increase their insolence, and give them a disadvantageous opinion of our strength—The council are of opinion that these forts are to be maintained, and reckoned in the chain intended by the Assembly.

Fifthly: Is it then necessary to have a fort between that and Enocks and Ashby's?

To open a communication between the forts at Enocks's and Ashby's, it is necessary to clear a road leading to the South-Branch above Suttons plantation, passing near to Ross's mill, from the best and nearest way to the fort commanded by Captain John Ashby; and as the distance will not be above twenty-two miles, it is not necessary to build between. But the Council are of the opinion that a Block-House may be found necessary to secure the passage of the River.

Sixthly: Are the Forts built by Captain Waggener upon the South Branch to be deemed in the chain intended by the Assembly?

The Forts built by Captain Waggener have had the desired effect—The inhabitants of that fertile district, keep possessions of their Farms; and seem resolved to pursue their Business under cover of them. They are therefore to be looked upon in the chain intended by the Assembly. The Council are of opinion that it will be found necessary to maintain a Block-house at Pearsalls, to secure that difficult pass, and keep the communication open.

Seventhly: Which is the next important & convenient place for building on, above the upper fort, built by Captain Waggener? Upon the main branch about twenty miles higher up, where there is a considerable body of inhabitants.

The men in that Garrison may secure that Settlement, and protect those on the heads of the waters of the South-branch, and those upon Shanandoah River.

Eighthly: The President asking whether the Council in general were acquainted with the particular situation of the frontiers to the southward of the waters of the South-Branch?

The Council declared they were not and thought it advisable that the completing the chain should be referred to Captain Hogg with directions to build at or about twenty or thirty miles distance, as the situation of the country requires, or Ground will permit—and to have the particular regard to the body of inhabitants to be defended and the passes most frequented by the Enemy—and that Captain Hogg begin to build—observing the above considerations, to the southward of Fort Dinwiddie, extending the line towards May river, as directed by the Assembly.

Lastly: The Question being put—How many men were absolutely necessary for the defence of Fort Cumberland against an attack with small arms?

Notwithstanding the whole number of men raised could be employed to advantage at Fort Cumberland—yet to carry on the intended work, it was necessary to draw off as many as could be possibly spared.

The Council are of opinion that one hundred and seventy privates is the smallest number that can be left for the defence of the Garrison against small arms: and that nothing more could be expected from that number than to act on the defensive, and do the Duty of the Garrison—with liquor and to suttie.

The President asked whether Mr. Alexander Woodrow was qualified for that office; and how he had behaved since his appointment to suttie? To which the council answered unanimously, that they thought him a very proper person and well qualified; as he has hitherto behaved with the greatest exactness and conformity to the rules and orders of the Garrison—and with much modesty and gentility.

Erected by The Fort Edwards Foundation.

Topics. This historical marker is listed in these topic lists: Roads & Vehicles • War, French and Indian.

Location. 39° 18.208′ N, 78° 26.03′ W. Marker is in Capon Bridge, West Virginia, in Hampshire County. Marker is on Cold Stream Road (County Route 15 at milepost 15), just south of Clark Hillside Drive, on the right when traveling north. Touch for map. Marker is at or near this postal address: 350 Cold Stream Rd, Capon Bridge WV 26711, United States of America. Touch for directions.