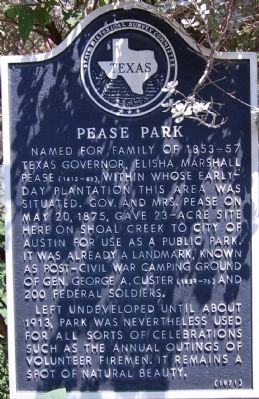 By Keith Peterson, September 9, 2007
1. Pease Park Marker
Inscription.
Pease Park. . . . Named for family of 1853-57 Texas Governor, Elisha Marshall Pease (1812-83), within whose early-day plantation this area was situated. Gov. and Mrs. Pease on May 20, 1875, gave 23-acre site here on Shoal Creek to City of Austin for use as a public park. It was already a landmark, known as post-Civil War camping ground of Gen. George A. Custer (1839-76) and 200 federal soldiers. . . Left undeveloped until about 1913, park was nevertheless used for all sorts of celebrations such as the annual outings of volunteer firemen. It remains a spot of natural beauty. . This historical marker was erected in 1971 by State Historical Survey Committee. It is in Austin in Travis County Texas

Left undeveloped until about 1913, park was nevertheless used for all sorts of celebrations such as the annual outings of volunteer firemen. It remains a spot of natural beauty.

Location. Marker has been reported missing. It was located near 30° 16.858′ N, 97° 45.089′ W. Marker was in Austin, Texas, in Travis County. Marker was on Kingsbury Street west of Parkway, on the right when traveling west. Pease Park is under construction, the marker is currently not installed 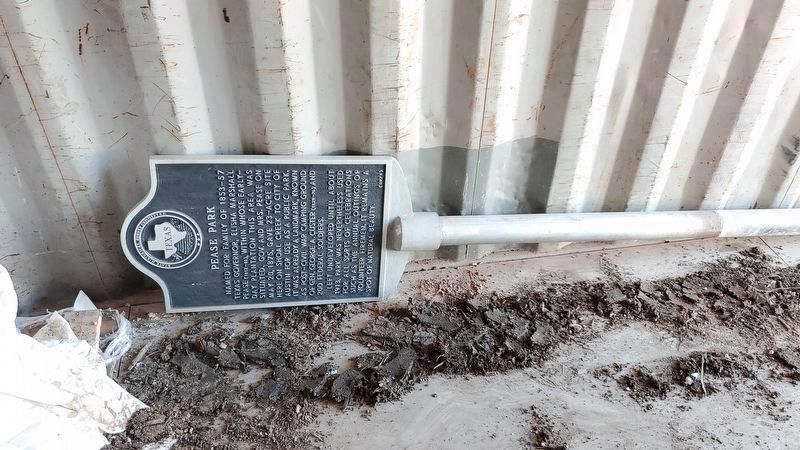 By Richard Denney, February 22, 2021
2. Pease Park Marker
The marker is currently in storage awaiting completion of work on Pease Park.
and is being held by the construction company. Touch for map. Marker was at or near this postal address: 1100 Kingsbury Street, Austin TX 78701, United States of America. Touch for directions. 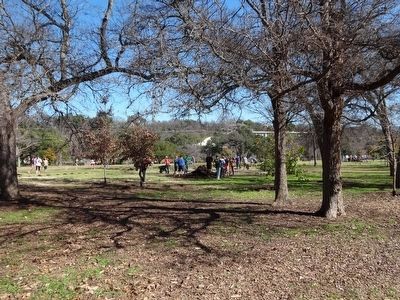