Advance of the 17th A.C. Toward the River 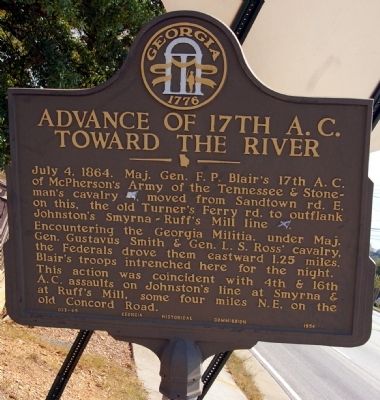 By David Seibert, October 3, 2008
1. Advance of the 17th A.C. Toward the River Marker
Inscription.
Advance of the 17th A.C. Toward the River. . July 4, 1864. Maj. Gen. F. P. Blair’s 17th A. C. of McPherson’s Army of the Tennessee and Stoneman’s cavalry [US], moved from Sandtown rd. E. on this, the old Turner’s Ferry rd. to outflank Johnston’s Smyrna – Ruff’s Mill line [CS]., Encountering the Georgia Militia, under Maj. Gen. Gustavus Smith and Gen. L. S. Ross’ cavalry, the Federals drove them eastward 1.25 miles. Blair’s troops intrenched here for the night. , This action was coincident with 4th and 16th A. C. assaults on Johnston’s line at Smyrna and at Ruff’ s Mill, some four miles N.E. on the old Concord Road. . This historical marker was erected in 1954. It is in Mableton in Cobb County Georgia

This action was coincident with 4th & 16th A. C. assaults on Johnston’s line at Smyrna & at Ruff’ s Mill, some four miles N.E. on the old Concord Road.

Topics and series. This historical marker is listed in this topic list: War, US Civil. In addition, it is included in the Georgia Historical Society series list. A significant historical date for this entry is July 4, 1767. 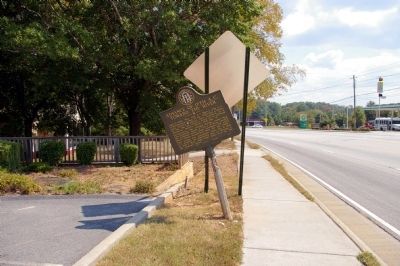 Click or scan to see
this page online
Highway. Touch for map. Marker is in this post office area: Mableton GA 30126, United States of America. Touch for directions.

More about this marker. The marker has clearly suffered damage from a wayward vehicle. 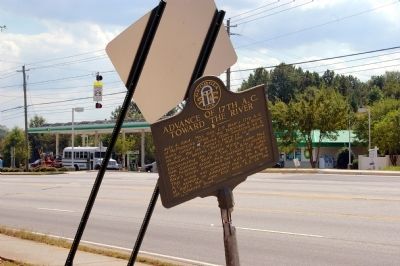