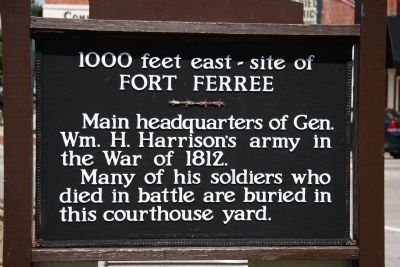 By Dale K. Benington, August 6, 2008
1. Fort Ferree Marker
Inscription.
Fort Ferree. Ohio Revolutionary Memorial Trail.
1,000 feet east - site of Fort Ferree »»«« Main headquarters of General William H. Harrison's army in the War of 18 12., Many of his soldiers who died in battle are buried in this courthouse yard.. . This historical marker was erected in 1930 by Ohio Revolutionary Memorial Commission. It is in Upper Sandusky in Wyandot County Ohio

Many of his soldiers who
died in battle are buried in
this courthouse yard.

Topics and series. This historical marker is listed in these topic lists: Forts and Castles • Military • War of 1812. In addition, it is included in the Ohio Revolutionary Memorial Commission series list. A significant historical year for this entry is 1812.

Location. 40° 49.642′ N, 83° 16.87′ W. Marker is in Upper Sandusky, Ohio, in Wyandot County. Marker is at the intersection of S. Sandusky Avenue (Ohio Route 53) and E. Wyandot Avenue (U.S. 30), on the right when traveling north on S. Sandusky Avenue. This historical marker is located in downtown Upper Sandusky, Ohio, on the northwest corner of the front lawn of the Wyandot County courthouse. Touch for map. Marker is at or 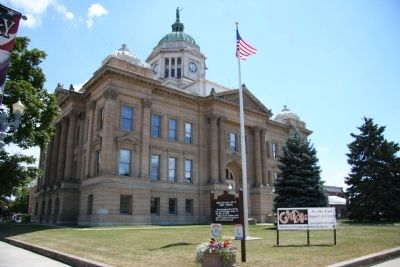 More about this marker. There is a related historical marker regarding Fort Ferrre, located 1,000 feet to the east, on the old Lincoln Highway (modern day US 30), on the original site of the fort.

2. Cartographic Map of the (Western) Ohio Revolutionary Memorial Trail, 1930. This is a link to information provided by the Midpointe Library System. Middletown, Trenton, West Chester, Ohio (Submitted on September 2, 2014, by Dale K. Benington of Toledo, Ohio.) 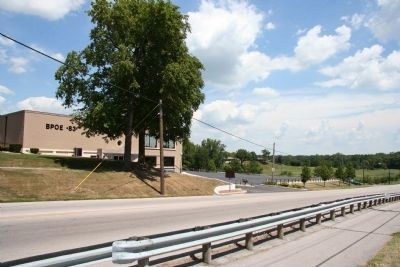 By Dale K. Benington, August 6, 2008
3. Fort Ferree Marker
View of the marker that is located approximately 1,000 feet to the east of this marker, in front of the local Elk Lodge, at the original site of Fort Ferree.
1. Ohio Revolutionary Memorial Trail System.
Back in 2008, while I was attempting to post as many War of 1812 related markers as I could find, in preparation for the approaching Bicentennial celebration of the War of 1812, I began to discover (quite be accident) the Ohio Revolutionary Memorial Trail System. As I started to read about this network of markers, that was originally erected back in 1930 as part of Ohio's 150 year celebration of its involvement in the American Revolutionary War, I came to realize that it was also a potentially excellent source of historical markers that featured information regarding Ohio's role in the War of 1812. The Ohio Revolutionary Memorial Commission (ORMC) had published a 1931 planning report that listed all of the historical markers that had been commissioned to be erected, listing each marker by county, with text included, and of the nearly 70 markers erected, close to 25 of them featured information regarding War of 1812 related historical events and locations.

Unfortunately I soon discovered that there were more of these 1930 era markers that were missing than what had survived. So that made it all the more satisfying each time that I was able to discover, and post on the Historical Marker database, a surviving ORMC marker.

Well the Bicentennial Celebration of the War of 1812 has come 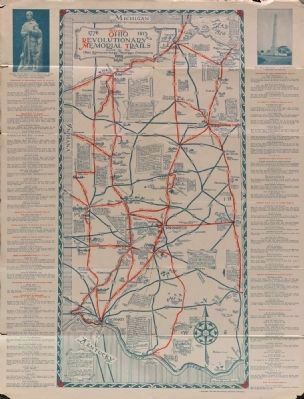 Image courtesy of the MidPointe Library System (www.MidPointeLibrary.org)
4. Ohio Revolutionary Memorial Trail Map
A view of an original Ohio Revolutionary Memorial Trail Map, from 1930. For a better view double click on this picture.
and gone, and the focus is no longer on rushing to discover and post all of Ohio's War of 1812 related historical markers. So in the spirit of taking the time to relax and to smell the roses, that's just what I have been doing with the ORMC markers. In doing so, I noticed something about these markers that I had completely overlooked before.

It is my impression, that the ORMC markers, were the only marker series ever commissioned in the state of Ohio that had silhouette art work attached across the top of each marker. What makes these markers even more interesting, at least to me, is that the silhouette art work, that was featured across the top of each ORMC marker was seemingly unique to each marker, and the artwork was made to relate to the historical event featured in the text of each marker.

So, having now come to better appreciate the significance of this rare silhouette art work feature, I have decided to try and go back to each of these surviving 16 markers, and to better feature and record for the historical record, the silhouettes on each of 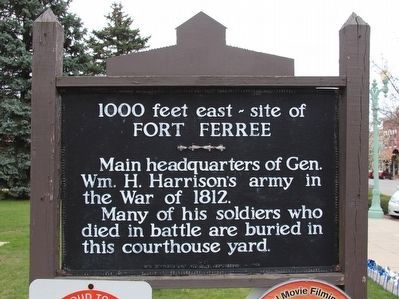 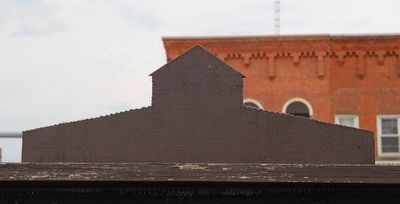 By Dale K. Benington, April 6, 2016
6. Fort Ferree Marker
Close-up view of the unique silhouette art work that is featured across the top of this marker. 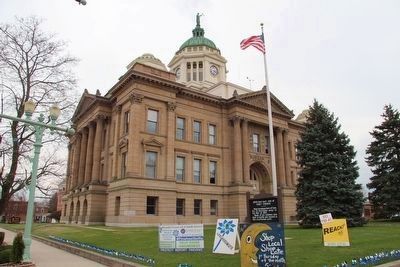 By Dale K. Benington, April 6, 2016
7. Fort Ferree Marker
A distant view of the marker as seen in the northwest corner of the Wyandot County courthouse front lawn.