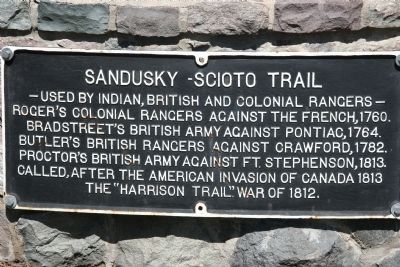 Topics. This historical marker is listed in these topic lists: Native Americans • Roads & Vehicles • War of 1812 • War, French and Indian. A significant historical year for this entry is 1760.

Location. 41° 20.203′ N, 83° 7.938′ W. Marker is in Fremont, Ohio, in Sandusky County. Marker is at the intersection of Buckland Ave. and Cleveland Ave., on the left when traveling north on Buckland Ave.. This historical marker is located on the outer wall that surrounds the Rutherford B. Hayes Presidential Center, just to the left of the south-east gate entrance (the gate doors originally protecting the White House in Washington DC, but were donated to the Hayes Presidential Center). Touch for map. Marker is at or near this postal address: 1491 Buckland Ave, Fremont OH 43420, United States of America. Touch for directions.

Other nearby markers. At least 8 other markers are within walking distance of this marker. Harold R. Balsizer (about 500 feet away, measured in a direct 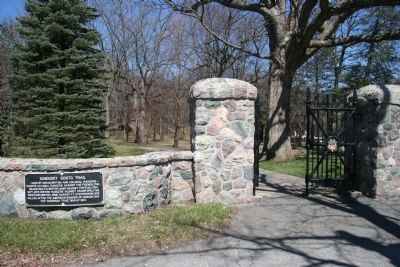 Photographed By Dale K. Benington, April 8, 2009
2. Sandusky-Scioto Trail Marker
The historical marker is shown on the wall of the Hayes Presidential Center, just to the left of the gated southeast entrance that allows the Scioto-Sandusky Trail to proceed through grounds of the Presidential estate. Immediately seen through and just beyond the gate is the broad leaf tree that Mr. Hayes named after William Henry Harrison.

More about this marker. The pathway that heads north through the nearby gated entrance, and then northward through the Rutherford B. Hayes Presidential Center is said to be built upon the original Scioto-Sandusky Trail that this historical marker is referring to. As you go through the nearby gate and begin to walk north on the trail, almost immediately you come upon one of the many giant, broad leaf trees, that Mr. Hayes had developed the habit of naming after any number of his famous friends and countrymen. This particular tree has a plaque upon it stating that it was named by Mr. Hayes after, William Henry Harrison.

Regarding Sandusky-Scioto Trail. During the course of the War of 1812 this trail, which runs right through the Hayes Presidential Center, was said to have been used at times by both the British and their Native American allies, as well as by the American military. Tradition has it that at some point, during the course of his Sandusky Valley Campaign, elements of the American army (along with General Harrison) actually camped and slept on what is now the Hayes Presidental Center. 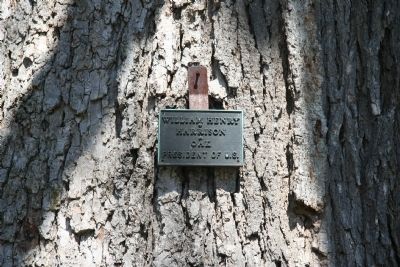