The Camp of Washington Irving 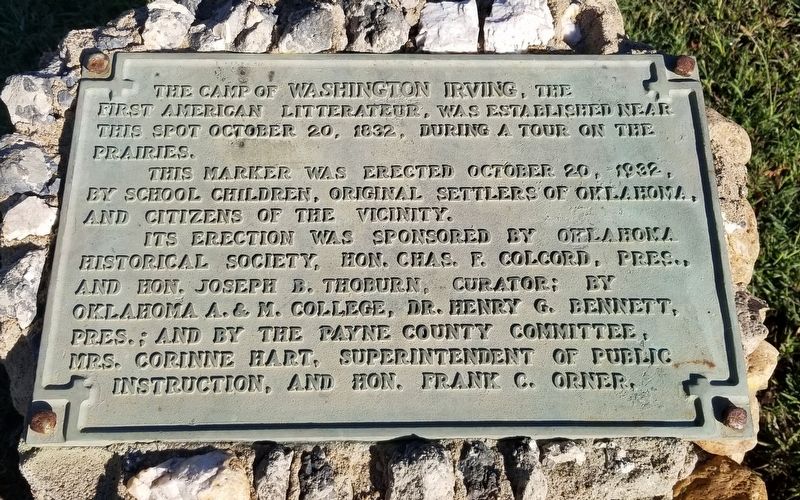 The Camp of Washington Irving, the first American Litterateur, was established near this spot October 20, 1832, during a tour on the prairies.

This marker was erected October 20, 1932, by school children, original settlers of Oklahoma, and citizens of the vicinity.

Erected 1932 by School children, original settlers of Oklahoma, and citizens of the vicinity.

Topics. This historical marker is listed in this topic list: Settlements & Settlers. A significant historical date for this entry is October 20, 1832.

Other nearby markers. At least 7 other markers are within 12 miles of this marker, measured as

Washington Irving (April 3, 1783 – November 28, 1859) was an American short-story writer, essayist, biographer, historian, and diplomat of the early 19th century. He is best known for his short stories "Rip Van Winkle" (1819) and "The Legend of Sleepy Hollow" (1820), both of which appear in his collection The Sketch Book of Geoffrey Crayon, Gent. His historical works include biographies of Oliver Goldsmith, Muhammad and George Washington, as well as several histories of 15th-century Spain that deal with subjects such as Alhambra, Christopher Columbus and the Moors. Irving served as American ambassador to Spain in the 1840s. Source: Wikipedia

Photographed By James Hulse, October 30, 2021
3. The view of the Camp of Washington Irving Marker from the park 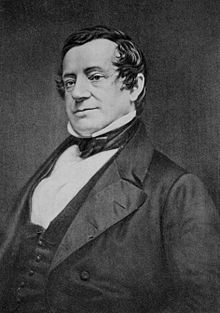