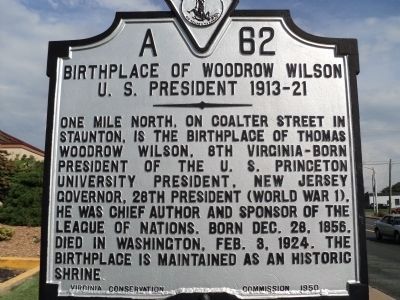 One mile north, on Coalter Street in Staunton, is the birthplace of Thomas Woodrow Wilson, 8th Virginia-born President of the U.S., Princeton University President, New Jersey Governor, 28th President (World War I). He was chief author and sponsor of the League of Nations. Born Dec 28, 1856, died in Washington, Feb 3, 1924. The birthplace is maintained as an historic shrine.

Topics and series. This historical marker is listed in these topic lists: Peace • War, World I. In addition, it is included in the Former U.S. Presidents: #28 Woodrow Wilson series list.

Location. 38° 8.239′ N, 79° 4.058′ W. Marker is near Staunton, Virginia. Marker is at the intersection of Greenville Avenue (U.S. 11) and Ritchie Boulevard (State Route 275), on the right when traveling south on Greenville Avenue. It is at the city southern city line. Touch for map. Marker is in this post office area: Staunton VA 24401, United States of America. Touch for directions.

Other nearby markers. At least 8 other markers are within walking distance of this marker. Barnas Sears, Woodrow Park, & Sears Hill Neighborhood (approx. 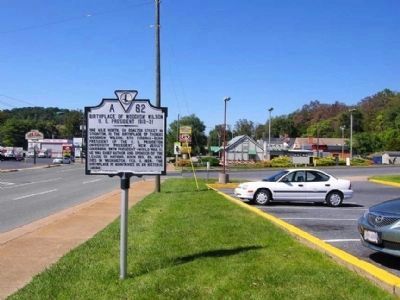 More about this marker. A similar marker is on U.S. 11 at the northern city line.

Related marker. Click here for another marker that is related to this marker. The similar marker on U.S. 11 at the northern city line. 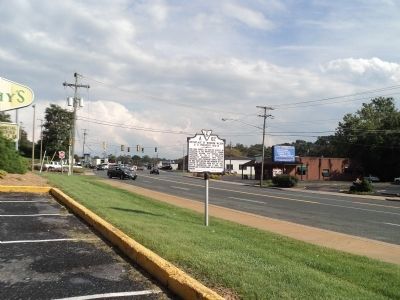 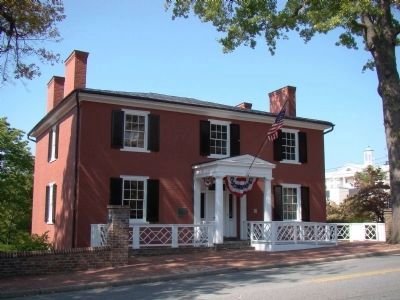