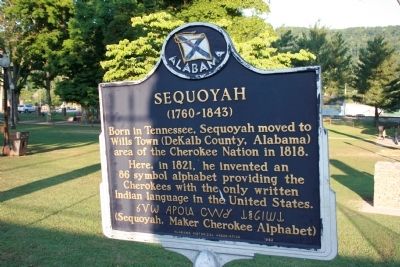 Photographed By Tim Carr, June 15, 2008
1. Sequoyah Marker
Inscription.
Sequoyah. Born in Tennessee, Sequoyah moved to Wills Town (DeKalb County, Alabama) area of the Cherokee Nation in 1818., Here, in 1821, he invented an 86 symbol alphabet providing the Cherokees with the only written Indian language in the United States., (Sequoyah, Maker Cherokee Alphabet) . This historical marker was erected in 1983 by Alabama Historical Association. It is in Fort Payne in DeKalb County Alabama

Here, in 1821, he invented an 86 symbol alphabet providing the Cherokees with the only written Indian language in the United States.

Topics. This historical marker is listed in these topic lists: Education • Native Americans. A significant historical year for this entry is 1818. 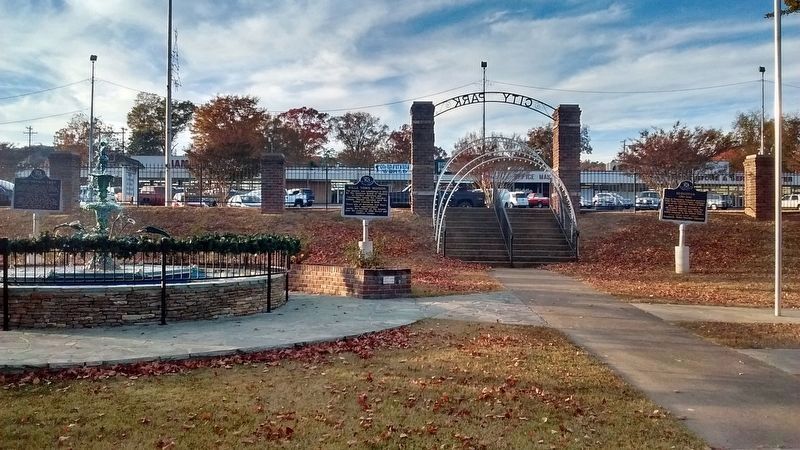 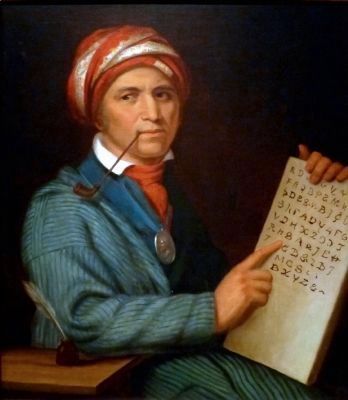 Photographed By Allen C. Browne, February 16, 2015
3. Sequoyah
This portrait of Sequoyah by Henry Inman, after Charles Bird King hangs in the National Portrait Gallery in Washington DC. The original Charles Bird King portrait burned in a fire at the Smithsonian Castle in 1865.

“Born Cherokee town of Tuskegee, eastern Tennessee Sequoyah, the son of a Cherokee chief's daughter and a fur trader from Virginia, was a warrior and hunter and, some say, a silversmith. For twelve years he worked to devise a method of writing for the Cherokee language. His syllabary of eighty-five symbols representing vowel and consonant sounds was approved by the Cherokee chiefs in 1821. The simple utilitarian system made possible a rapid spread of literacy throughout the Cherokee nation. Medicine men set down ceremonies for healing, divination, war, and traditional ball games; missionaries translated hymns and the New Testament into the native language; and in 1828 the Cherokee Phoenix, a weekly bilingual newspaper, began publication at New Echota, Georgia.” — National Portrait Gallery
Credits. This page was last revised on November 28, 2016. It was originally submitted on February 27, 2010, by Timothy Carr of Birmingham, Alabama. This page has been viewed 1,824 times since then and 54 times this year. Photos:   1. submitted on February 27, 2010, by Timothy Carr of Birmingham, Alabama.   2. submitted on November 27, 2016, by Tom Bosse of Jefferson City, Tennessee.   3. submitted on April 13, 2015, by Allen C. Browne of Silver Spring, Maryland. • Craig Swain was the editor who published this page.
Share this page.