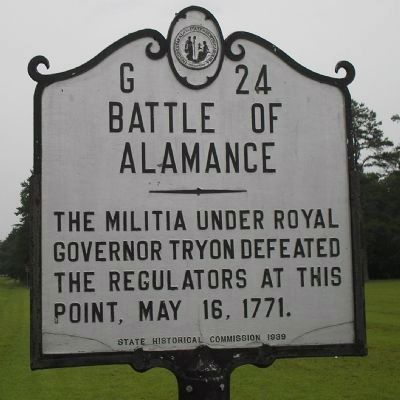 Photographed By Bill Coughlin, July 31, 2010
1. Battle of Alamance Marker
Inscription.
Battle of Alamance. . The militia under Royal Governor Tryon defeated the Regulators at this point, May 16, 1771. . This historical marker was erected in 1939 by State Historical Commission. It is in Alamance in Alamance County North Carolina

The militia under Royal Governor Tryon defeated the Regulators at this point, May 16, 1771.

Topics and series. This historical marker is listed in this topic list: War, US Revolutionary. In addition, it is included in the North Carolina Division of Archives and History series list. A significant historical date for this entry is May 16, 1948. 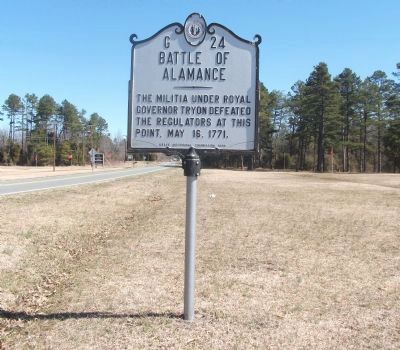 More about this marker. The marker sits on the battlefield. Nearby are two monuments. The closest is a granite monument, erected in 1880. The second monument is topped by a statue of James Hunter, General of the Regulators. Across the highway is the visitor's center which includes artifacts and an audiovisual presentation of the battle. The John Allen House is a restored log house, complete with furnishings. Allen, a local resident, constructed the house around 1780. It is a typical frontier dwelling of the period. The Battleground is open Monday through Saturday 9:00 a.m. to 5:00 p.m.

Regarding Battle of Alamance. The years preceding the American Revolution, were a period of discontent. Citizens confronted the Governor's officials over various grievances, including excessive taxes and dishonest officials.

Peaceful protests and minor incidents occurred until 1768, when an association of "Regulators" was formed. The group included James Hunter, Rednap Howell, William Butler and Herman Husband. These men and others began to take a radical approach. They disrupted court proceedings, refused to pay fees and terrorized local officials.

In March 1771, Royal Governor William Tryon mustered a militia to bring order to the area. General Hugh Waddell was ordered to approach Hillsoborough, NC by way of Salisbury. 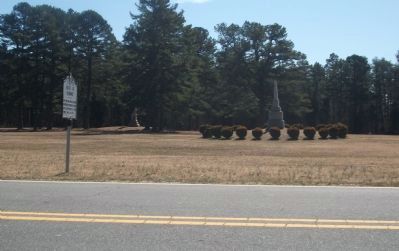 Photographed By Patrick G. Jordan, March 6, 2010
3. Battle of Alamance Marker and Nearby Monuments
Waddell was to meet Tryon's army at Hillsborough. Waddell encountered a large group of Regulators en route and turned back. Governor Tryon left Hillsborough on May 11, to go to Waddell's location as reinforcements. Tryon's men, approximately 1,000 of them, rested on the Banks of Alamance Creek. Five miles away, approximately 2,000 Regulators had gathered.

On May 16, 1771, the Regulators were asked by Governor Tryon's men to disperse. They refused and the battle ensued. The Regulators were no match for Tryon's men. They were untrained and unorganized. Many fled the battlefield, leaving neighbors to fight on. Nine members of Governor Tryon's militia were killed, and 61 were wounded. Regulator losses are unknown, but estimated to be much greater. Governor Tryon took approximately 15 prisoners. Seven of them were later executed. Many Regulators moved to frontier areas beyond North Carolina. Those who stayed pledged an oath of allegiance to the royal government, in exchange for a pardon. 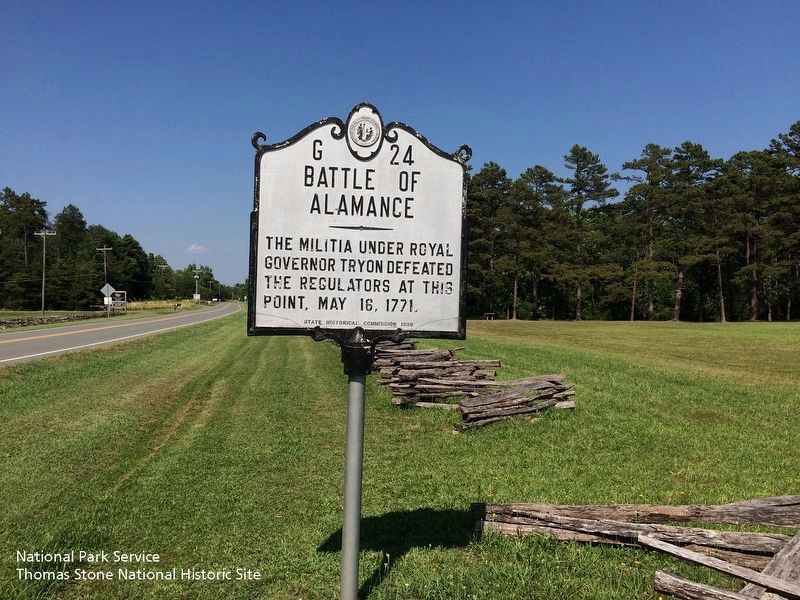 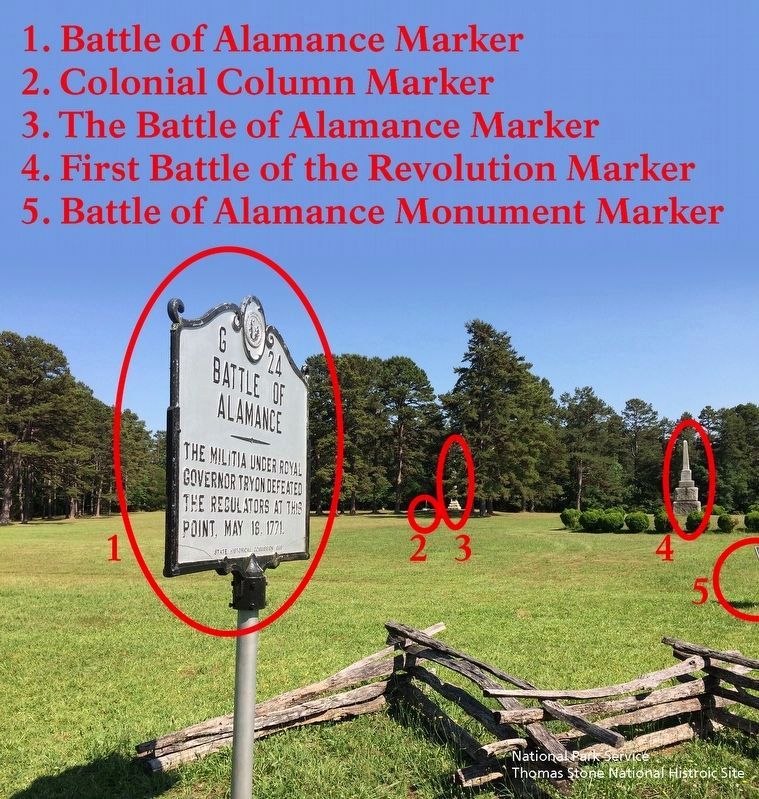 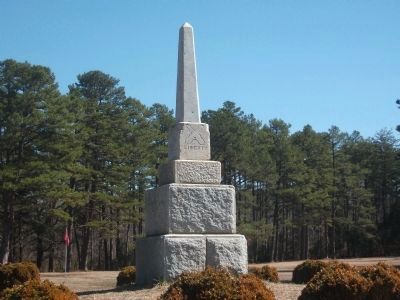 Photographed By Patrick G. Jordan, March 6, 2010
6. Granite Monument Erected in 1880
Monument Reads: First Battle of the Revolution Here was Fought the Battle of Alamance. May, 16, 1771. Between the British and the Regulators. 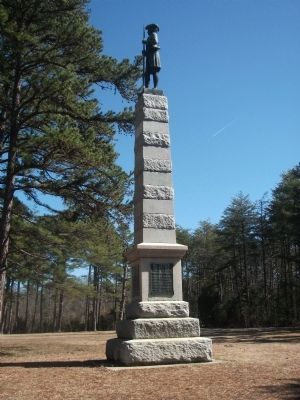 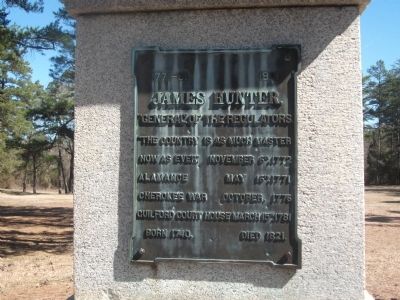 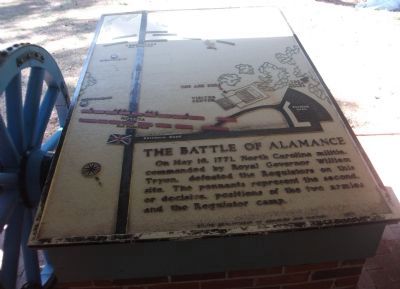 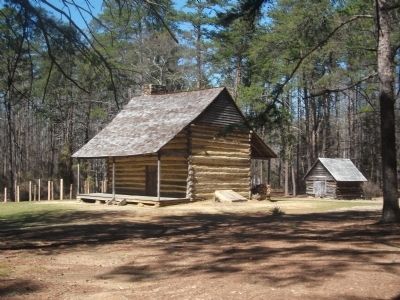 Photographed By Patrick G. Jordan, March 6, 2010
10. The John Allen House
Restored with many original furnishings. Open to the Public. 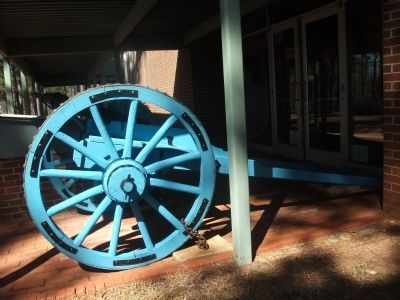 Photographed By Patrick G. Jordan, March 6, 2010
11. Working Cannon
Fired during Re-enactments (the second weekend in May) and during Colonial Living Week in October. Cannon demonstrations are also available for groups who make request prior to visit. 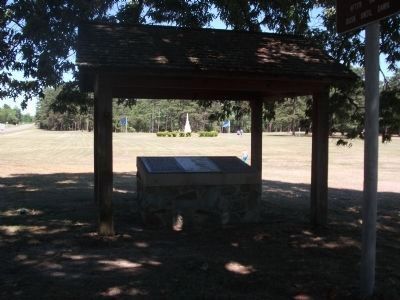 Photographed By Patrick G. Jordan, May 8, 2010
12. Battle of Alamance - Map of Battlefield
This marker is near the road, on NC Highway 62. On your left. just past the highway marker, as you travel south. The granite 1880 monument can be seen in the distance. 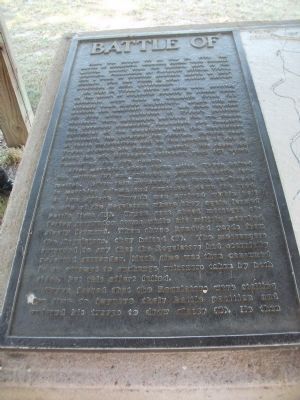 Photographed By Patrick G. Jordan, May 8, 2010
13. Battle of Alamance Marker - Battlefield Map
A Closer View of the Text to the Left of the Battlefield Map. 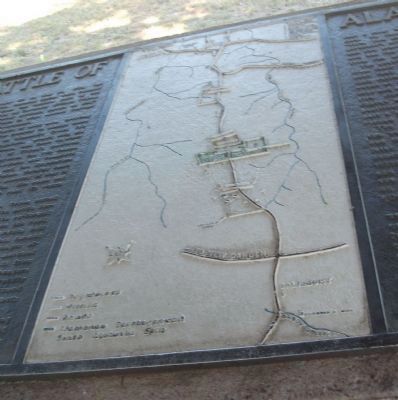 Photographed By Patrick G. Jordan, May 8, 2010
14. Battle of Alamance Marker - Battlefield Map
A Closer View of the Center Panel 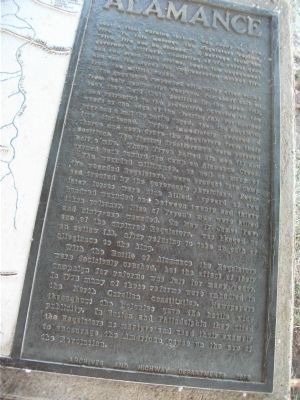