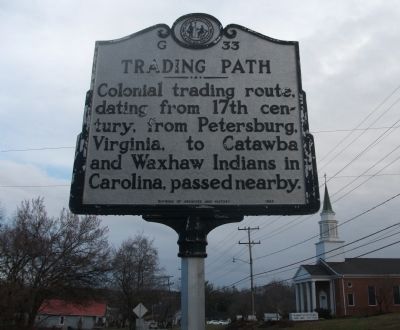 Photographed By Paul Jordan, March 14, 2010
1. Trading Path Marker
Inscription.
Trading Path. . Colonial trading route, dating from 17th century, from Petersburg, Virginia, to Catawba and Waxhaw Indians in Carolina, passed nearby. . This historical marker was erected in 1983 by Division of Archives and History. It is in Burlington in Alamance County North Carolina

Colonial trading route, dating from 17th century, from Petersburg, Virginia, to Catawba and Waxhaw Indians in Carolina, passed nearby.

Erected 1983 by Division of Archives and History. (Marker Number G-33.)

Topics and series. This historical marker is listed in these topic lists: Anthropology & Archaeology • Colonial Era • Native Americans • Settlements & Settlers. In addition, it is included in the North Carolina Division of Archives and History series list.

Location. 36° 2.2′ N, 79° 29.157′ W. Marker is in Burlington, North Carolina, in Alamance County. Marker is on Alamance Road, 0.1 miles south of Pond Road, on the right when traveling south. From Interstate 85/40 in Burlington, N.C., exit number 143. Travel south on NC Highway 62, also called Alamance Road. Travel approximately 3 miles to the the Village of Alamance. Marker is on your right, in front of CT-Nassau Corporation. Touch for map. Marker is at or near this postal address: 4101 South NC Highway 62, Burlington NC 27215, United States of America. Touch for directions.

Other nearby markers. At least 8 other markers are within 3 miles of this 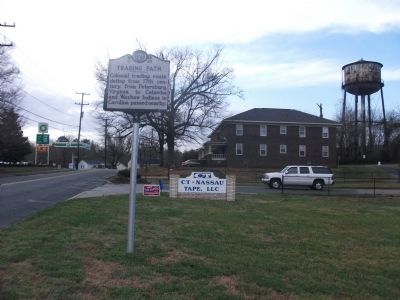 Regarding Trading Path. The Trading Path was not one wide path, but a corridor of roads and trails. Native Americans and early settlers used these paths to travel from the Chesapeake Bay region (mostly near Petersburg Virginia), south through the Piedmont of North Carolina, South Carolina and Georgia.

Also see . . .  Trading Path Association. This non-profit organization's purpose is to preserve, promote and study the historic Trading Path of the Southeastern Piedmont, NC. (Submitted on March 16, 2010, by Paul Jordan of Burlington, N. C., U. S. A..)