The Official Newspaper of the Cuban Revolutionary Party 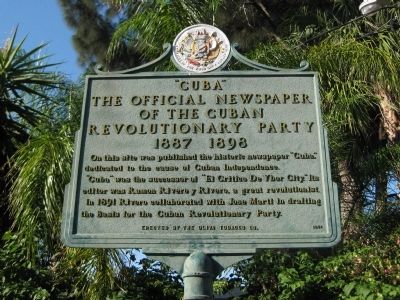 On this site was published the historic newspaper “Cuba,” dedicated to the cause of Cuban Independence.

“Cuba” was the successor of “El Crítico De Ybor City.” Its editor was Ramon Rivero y Rivero, a great revolutionist.

In 1891 Rivero collaborated with José Martí in drafting the Basis for the Cuban Revolutionary Party.

Erected 1961 by The Oliva Tobacco Co. (through a project of the Ybor City Rotary Club).

Topics. This historical marker is listed in these topic lists: Communications • Government & Politics • Hispanic Americans. A significant historical year for this entry is 1891.

Location. 27° 57.656′ N, 82° 26.695′ W. Marker is in Tampa, Florida, in Hillsborough County. Marker is on East 8th Avenue west of Avenida República de Cuba (North 14th Street), on the right when traveling east. Marker stands in front of the outdoor courtyard of the New World Brewery, a brewery and bar within the Ybor City Historic District (a National Historic Landmark District).

The marker is visible from 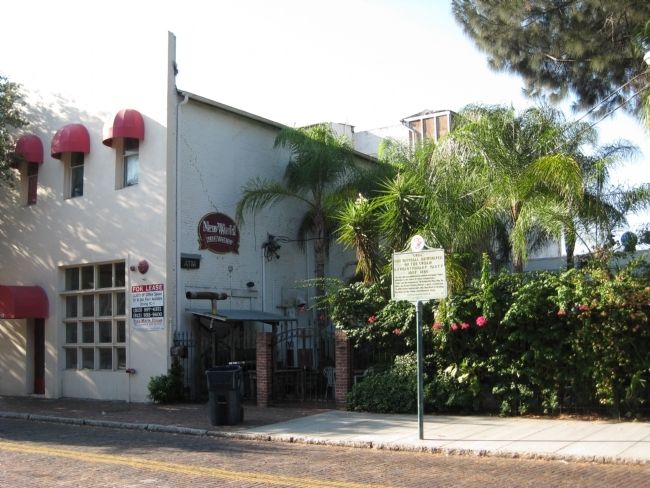 Click or scan to see
this page online
the TECO Line Streetcar System, which runs along East 8th Avenue. Touch for map. Marker is at or near this postal address: 1313 East 8th Avenue, Tampa FL 33605, United States of America. Touch for directions.

More about this marker. The marker is capped with the emblem of the Ybor City Rotary Club, which features the flags of the USA, Cuba, and historical variants of the flags of Italy and Spain, the steamship Hutchinson, and a cigar.

Regarding “Cuba”. Cuba and El Critico de Ybor City were among numerous short-lived Spanish-language newspapers to be published in the factory town of Ybor City. The papers suffered from a lack of sponsors and subscribers, since most of Ybor City's population followed the news through the "Lectores", who daily read to cigar workers over loudspeaker in Ybor's factories.

Ramon Rivero by 1897 published three editions of Cuba weekly. The paper left him in debt, but reportedly he kept it going out of sheer patriotism.
(Source: Tinajero, Araceli. Grasberg, Judith E. "El Lector: A History of the Cigar Factory Reader", pg. 96-97. University of Texas Press, 2010.)