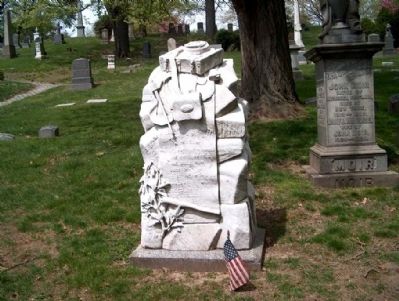 More about this marker. The detailing on the uniform is still very crisp and clear after 147 years in the elements.

Regarding William Moir Smith. William Moir Smith (1839-1861). Lieutenant, 71st Regiment National Guard, New York State Militia, Company A. Smith was severely wounded at the First Battle of Bull Run on July 21, 1861, and taken prisoner by the Confederates. First his foot, then later his leg were amputated, before he died while still a prisoner of war in Libby Prison, Richmond, Virginia, on August 2, 1861. Mr Jackson, a family friend living in Richmond, took charge of the body, interring it in a metal coffin placed in a tomb. Here the body remained for the length of the war. Finally, family and friends were able to have the body exhumed and shipped back to New York, where he was reinterred at The Green–Wood Cemetery on October 22, 1865 in Section 75, lot 5007.

Prior to the war, William was a member of the 'Alert Hose Co. No. 3'. His funeral took place at Central Presbyterian Church. Services were held, by Rev. Dr. Rockwell and Members of Host Co. No. 3 escorted the body to the church for services. Members of the seventy first Regiment acted as escort to the grave site.