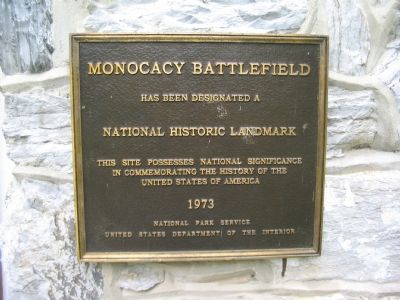 Marker series. This marker is included in the Battlefield Trails - Civil War, and the National Historic Landmarks marker series.

Location. 39° 22.031′ N, 77° 23.22′ W. Marker is near Frederick, Maryland, in Frederick County. Marker can be reached from Urbana Pike (State Highway 355), on the right when traveling north. Gambrill Mill is stop five on the driving tour of Monocacy Battlefield, which on a lane off the right side (east) of Urbana Pike. The marker is in the side of Gambrill Mill. The Mill previously was used as a visitors center until the summer of 2007. Touch for map. Marker is in this post office area: Frederick MD 21704, United States of America. Touch for directions.

Other nearby markers. At least 8 other markers are within walking distance of this marker. A Bold Plan (here, next to this marker); Gambrill Mill 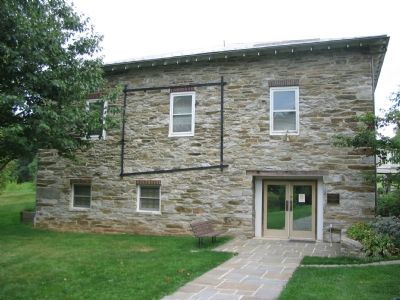 Regarding Monocacy Battlefield. Please use the related markers link to "tour" the Monocacy Battlefield. In addition, the Jug Bridge (see link 2 below) was also the scene of fighting in the battle. Buckeystown further south (see link 3 below) also figured into the Confederate operations in the battle. Reich's and Crum's Fords where limited fighting occurred is discussed in a photograph below. Lastly, those interested in a complete tour of Jubal Early's raid on Washington, D.C. should visit Fort Stevens, where the raid met its climax (see link 4 below). 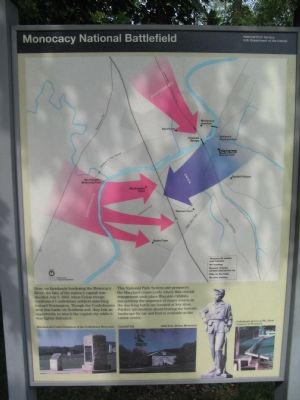 By Craig Swain, September 9, 2007
3. Monocacy National Battlefield
This interpretive sign carries the caption:
Here, on farmlands bordering the Monocacy River, the fate of the nation's capital was decided July 9, 1864, when Union troops confronted Confederate soldiers marching toward Washington. Though the Confederates won this battle on Northern soil, they lost an opportunity to attack the capital city while it was lightly defended.

This National Parks System site preserves the Maryland countryside where this crucial engagement took place. Wayside exhibits interpreting the sequence of major events in the day-long battle are located at key sites. Further information about touring the historic landscape by car and foot is available in the visitors center.
Click here for a list of markers that are related to this marker. The related markers provide a virtual tour of the Monocacy Battlefield by way of markers.

2. Jug Bridge and National Road Skirmishing. Although unmarked with Civil War related markers, the Jug Bridge and the Old National Road were contested throughout the day. A full Confederate division under Maj. Gen. Robert Rodes skirmished with portions of the 144th and 149th Ohio Infantry regiments, the 159th Ohio Mounted Infantry regiment, and the 3rd Maryland Potomac Home Guard. The action here tied up a sizable Confederate force, and secured the Federal right (northern) flank and escape route. While the land around the location has been industrialized and major highways now bisect the battleground, the site is worth a side trip for anyone studying the Battle of Monocacy. (Submitted on November 4, 2007, by Craig Swain of Leesburg, Virginia.)

3. Buckeystown. Still further down river from the Worthington Ford was Buckeystown, where another ford offered a crossing point over the Monocacy. Breckinridge's Division (commanded by Brig. Gen. John Echols at the time) remained on the road leading to Buckeystown 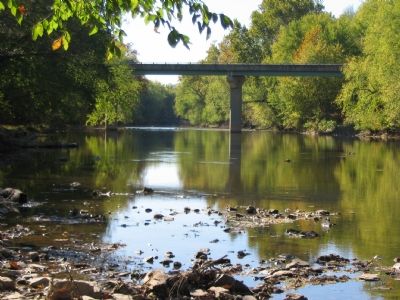 By Craig Swain, November 3, 2007
4. Reich's Ford Bridge
Just to the north of the battlefield are Reich's Ford and Crum's Ford. At the time of the battle, these fords offered the Confederates a location to flank Federal positions and cut off Gen. Wallace's route of retreat. However the fords were held by elements of the 1st and 3rd Maryland Potomac Home Brigades, thus deterring Confederate crossings. Thus the flow of battle was directed to the south at Worthington Ford. The best location to view the fords is Pinecliff Park, north of the Battlefield Park off Reich's Ford Road.
most of the day and was not directly involved with the fighting. The marker at Buckeystown discusses the activities there during the previous Confederate invasions of Maryland. (Submitted on November 4, 2007, by Craig Swain of Leesburg, Virginia.)

Additional comments.
1. References for the Battle of Monocacy
In addition to the National Parks Service material offered on their web site, the following sources were consulted when documenting the markers around the Monocacy Battlefield:

The Battle of Monocacy: A documented report, by Edwin C. Bearss, edited by Park Ranger Brett Spaulding, Monocacy Battlefield, 2003. While not a narrative history, this source brings together numerous primary sources to detail the battle in chronological sequence.

Fighting for Time: The Battle of Monocacy, by Glenn C. Worthington has long been a standard reference for the battle, and was recently updated by historian Brian Pohanka.

Monocacy: The Battle That Saved Washington, by B. Franklin Cooling is another good reference, which also notes the efforts to preserve the battlefield.

Jubal's Raid, by Frank E. Vandiver dates to 1960, but offers insight into the Confederate side of the campaign.

Sheridan in the Shenandoah, by Edward J. Stackpole, 2nd Edition, 1992, places the Battle in context of the larger strategic view of the war. This battle is one in a series of events culminating in the Confederate loss of the Shenandoah Valley.
— Submitted November 4, 2007, by Craig Swain of Leesburg, Virginia.